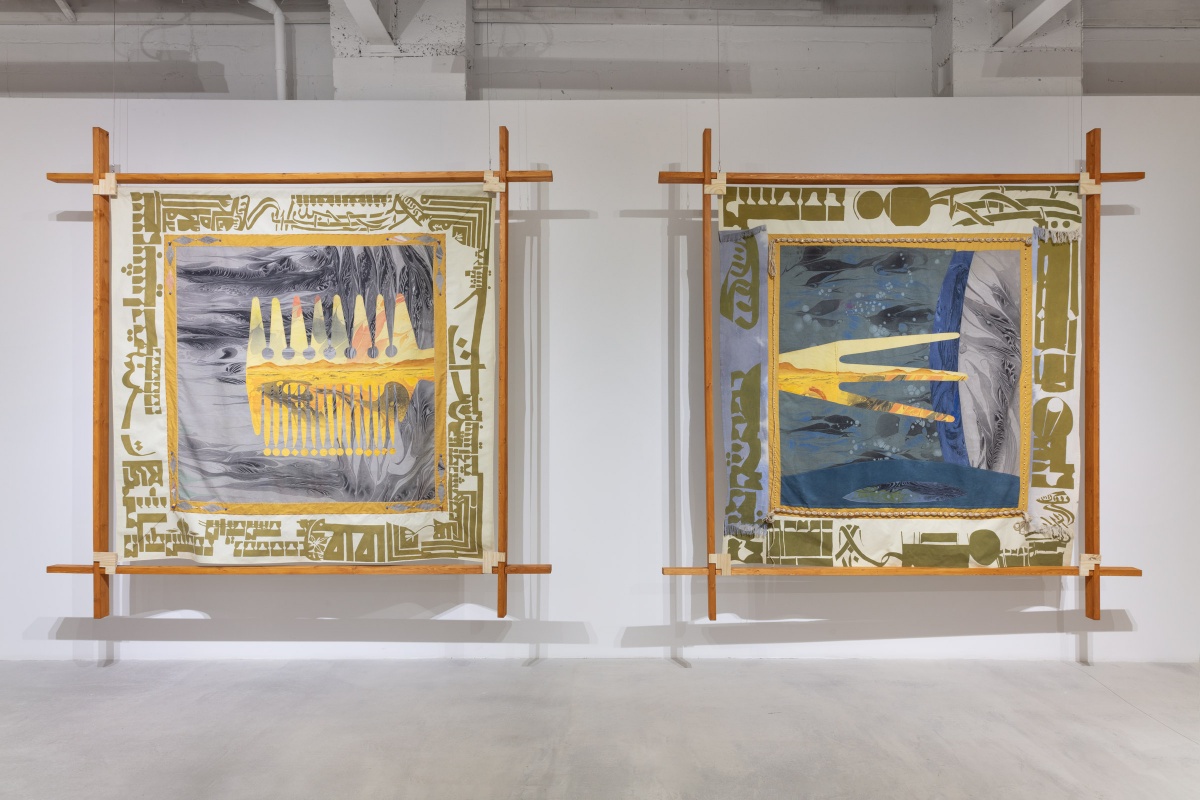 When approaching their work, Toronto-based contemporary artists Rajni Perera and Nep Sidhu look beyond the act of artmaking, engaging in what Sidhu describes as knowledge production. Their new collaborative exhibition, In the Realm Of Lightning, channels both their respective ancestries and futurist influences, exploring the infinite power of the present moment.

The exhibition includes large-scale hanging textile works depicting otherworldly beings, situations and settings, massive floor-mounted bronze and rolled steel sculptural works, embroidered protective adornment, and a smaller gallery dedicated to source materials and process. Each meticulously detailed piece in the exhibition is considered by the artists to be a functional tool and artifact that – according to Perera – can “enable us to visualize and manifest revolution.”

For Perera and Sidhu, this exhibition marks two years of labour and their first-ever major collaborative show together. We spoke to them both about In the Realm of Lightning, their artistic approach, and what it means to collaborate. 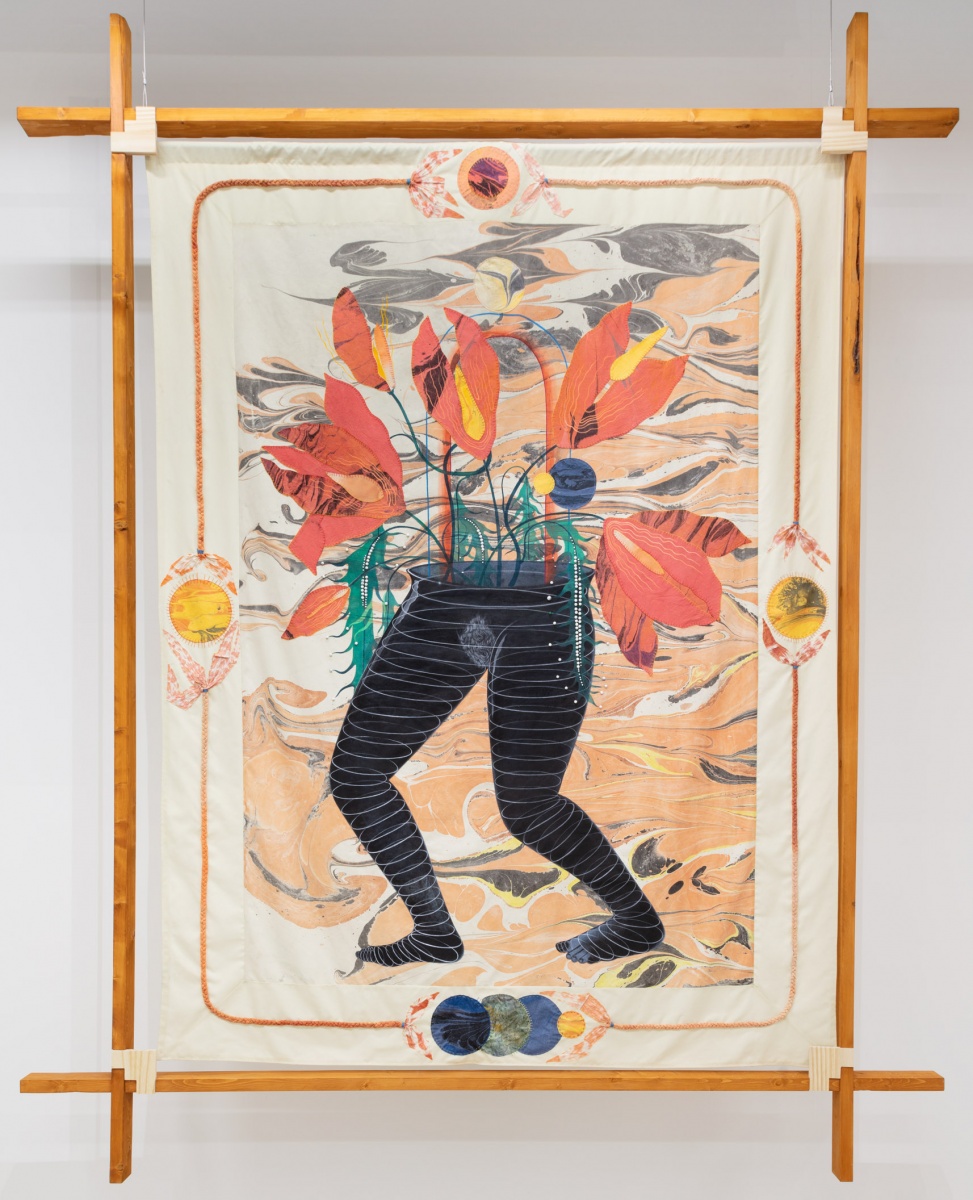 AGOinsider: The concept of the exhibition draws inspiration from a number of different sources; including your Sikh and Buddhist ancestry, and the cosmic/futurist works of visionaries like Sun Ra. What is The Realm Of Lightning, and how does this collection of artworks take visitors there?

NS: Some of the ideas and searches in the show came through an understanding of myth and the temporal being a living form of knowledge, something that’s not in contradiction with those who use it or pass on its tradition. The same could be said for those who elaborate such oral traditions into new figures and forms. The act of such a knowledge production was what Sun Ra spoke about and practised by means of revealing the potentials/parallels that existed in both myth and Solar Myth-making. There are many practices and viewpoints that end up having different ideas of the term Futurism, whether it is an archive of thinking/making within a diaspora or a general viewpoint of how one approaches their day. Within the exhibition, the locating of the ‘now’ feels central to the works as such that Ra’s understanding was very different from that of the Industrial world in terms of the present. Ra’s outlook followed within various traditions of the African Diaspora for whom only the present and the past exist. It is specifically in the past where all time accumulates and eternity finds its home. Unlike a Christian promise that reasons towards a vague tomorrow, Ra’s future exists now within the liberated moment.

RP: The Realm of Lightning is a super-expanded situation, or situations repeating infinite times in infinite places, where the action of going within enables us to visualize and manifest Revolution. For me personally, the poetic work of Sun Ra strikes many chords of Buddhist idealism, which is what I grew up with. He was able to connect a dialectic of the spiritual quest with a real need of freedom for himself and his people. When I first discovered Space Is the Place, then his music, then his poetry, I saw it as truly an act of calculated transportation – an absolute technology. Futurism often centres a Eurocentric or westernized notion of technology. I don’t believe in this because what daily use of personal technology has done is devolve our minds in the ways we need them to be strong. So when Sun Ra paints a picture of travelling through the universe and questioning matter and existence in such a relatable and accessible way – when it doesn’t matter who has what (and he addresses capitalism in this way too) he brings another technology into focus – the mechanism of the expanding an opened mind, with the power to move and change the world around you. 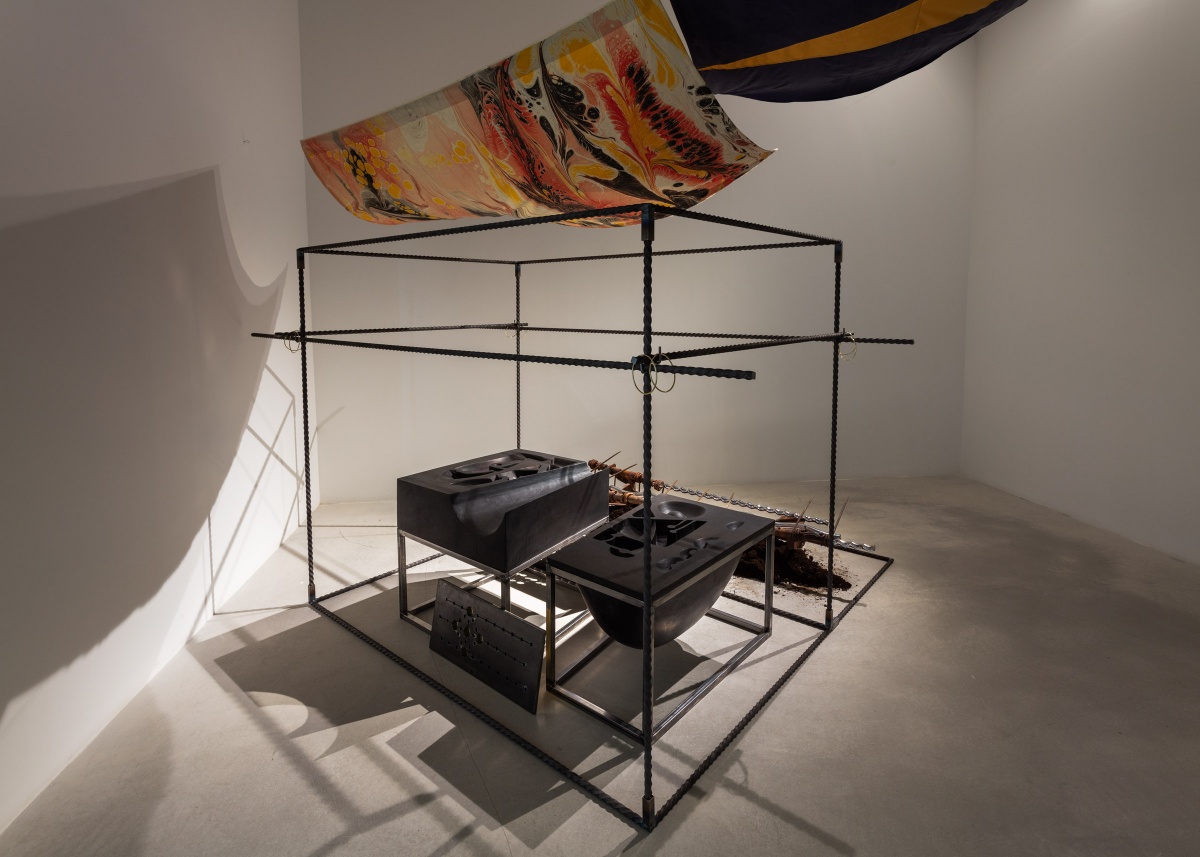 Nep Sidhu, 2021. An ortho Praxis existence. No being more supreme then you & I. This song is dedicated to Nature’s god.

AGOinsider: The exhibition contains such a wide range of textures and materials including fabrics, metals, beads, embroidery and wood. Can you share some of your process for sourcing and selecting materials? What criteria did you consider?

NS: In the effort of trying to will a memory that is steeped in detachment and formlessness, I didn’t subscribe to any one set of materials from the onset of the show. It allowed for greater space (and not much time!) to experiment and find other means to get closer to an idea. This also allowed for response and instincts to take a larger role in how the works spoke to one another.

RP: As far as criteria goes, I can say that there has definitely been no hierarchy of materials or processes. For instance, the marbled works were slow, strenuous and experimental in their coming to life. The process is the opposite of my regular production schedule, which are painted works on paper with a resolved beginning, end, and trajectory. Working with textile allowed me to respond to scale in a very particular way, and turn things around in my mind differently. It is also unruly in a most delightful way. I also have a wonderful technician, Emily, who has a great understanding of textile behaviour (!) which she shared generously, so that helped a lot. Our fingers and wrists are kind of sore.

AGOinsider: There are marbling patterns present throughout all the large-scale hanging textile pieces in the exhibition. Can you talk about the technique and process used to achieve this look?

RP: I was, in the beginning, looking to work on paper. But the setup costs were too high and it would be fragile going through all the motions required for my vision for the works. After taking a course at Paper House Studio, I started experimenting with larger and larger scales – in Tupperware and then in large tubs and even contemplating using a swimming pool. Then Nep built me a vat from aluminum with a drainage hole and enough depth to make the substrate-solution expense worthwhile. I was trying different synthetic solutions and formulas for marbling; acid/base balance, colour and ink buoyancy, keeping the vat clean, and de-sizing the textile. I ended up working with textile because it was more affordable and it let me do more. It has a longer working life. 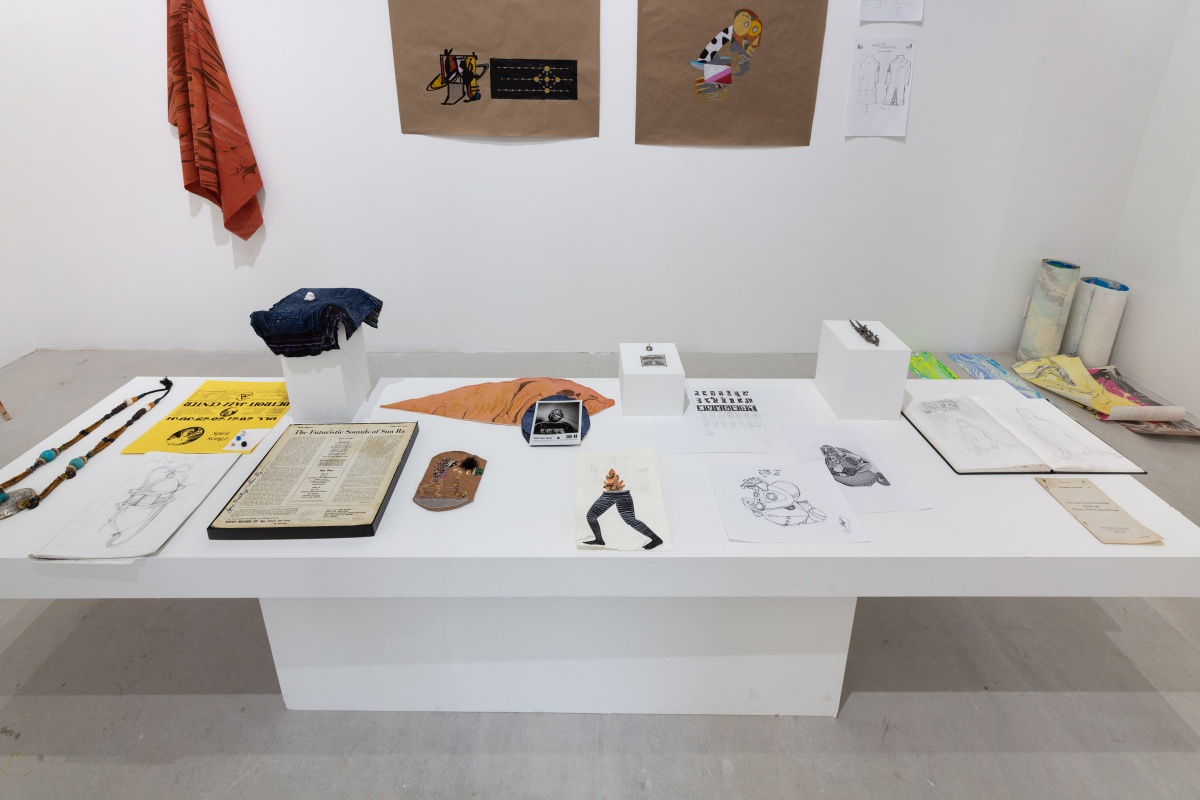 AGOinsider: There is a smaller gallery included in the exhibition dedicated to some of your source materials, preliminary sketches and mock ups. Why was it important for you to share these early stages of the work with visitors?

NS: Often in exhibitions objects are quite still in their installation which tend to point to a resolved idea which is the opposite of these works as they are conveyed to be in motion and in between ideas/ identities/forms. There’s nothing that offers a grand resolution. In the absence of resolve, there is much more feeling towards the proximity of wonder. We didn’t want this feeling instructed or defined by way of text and didactic as that also felt like a dead presentation of these ideas, so a room that held notes, ephemera, studio test results, initial means of communication between us (such as Rajni’s objects laid out on an orange textile) felt like it pointed to a search rather than a statement, which feels central to the attitude of these works. 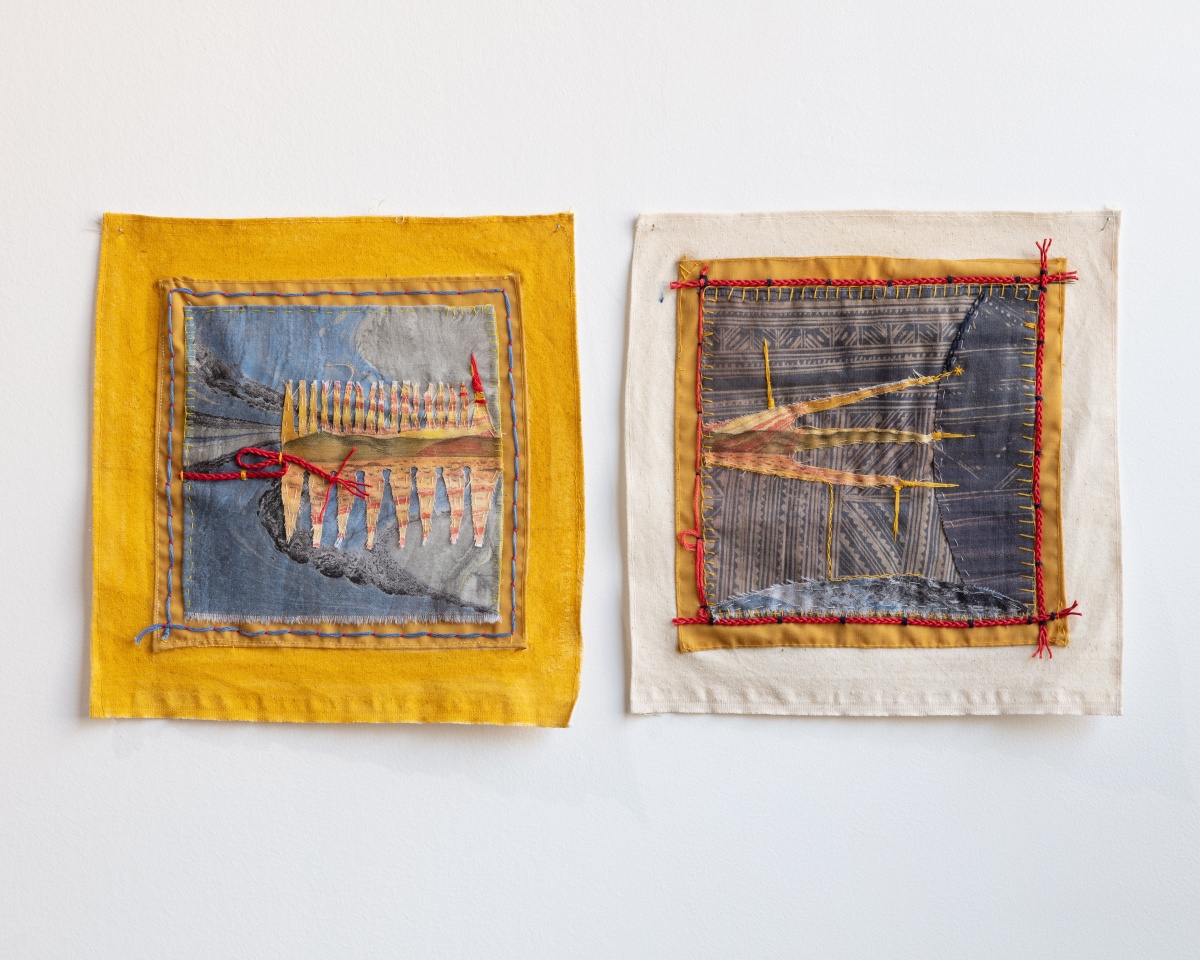 RP: They are so beautiful. We love them so we wanted to share them. It doesn’t have to be complete to connect you to a resolved feeling. This is how we formed them.

AGOinsider: In The Realm of Lightning is the culmination of two years of your collaboration and collective labour. What would you describe as your biggest challenge in creating the exhibition? What has been your biggest reward?

NS: For me it was trying to figure out a new way to make that included personal health, and making time for those that I love. It hasn’t been easy, I have a new son to take care of so I have to find new means and ways to work and to keep all lines open, but the reward of the show has been the time I have got to share with Rajni.

RP: Making all the finished/main works during a pandemic has been challenging enough – I would say that the very conditions in which we produced the works delayed, thwarted and made difficult most parts of the main works you see in the exhibition. It was also, unexpectedly, not possible to work alongside one another very often in making the works, which posed another challenge to having an exchange and to forge synergy. Therefore my biggest reward is that it all makes sense and that we still made it happen.

In the Realm Of Lightning is on view now until September 18 at Patel Brown Gallery in Toronto.