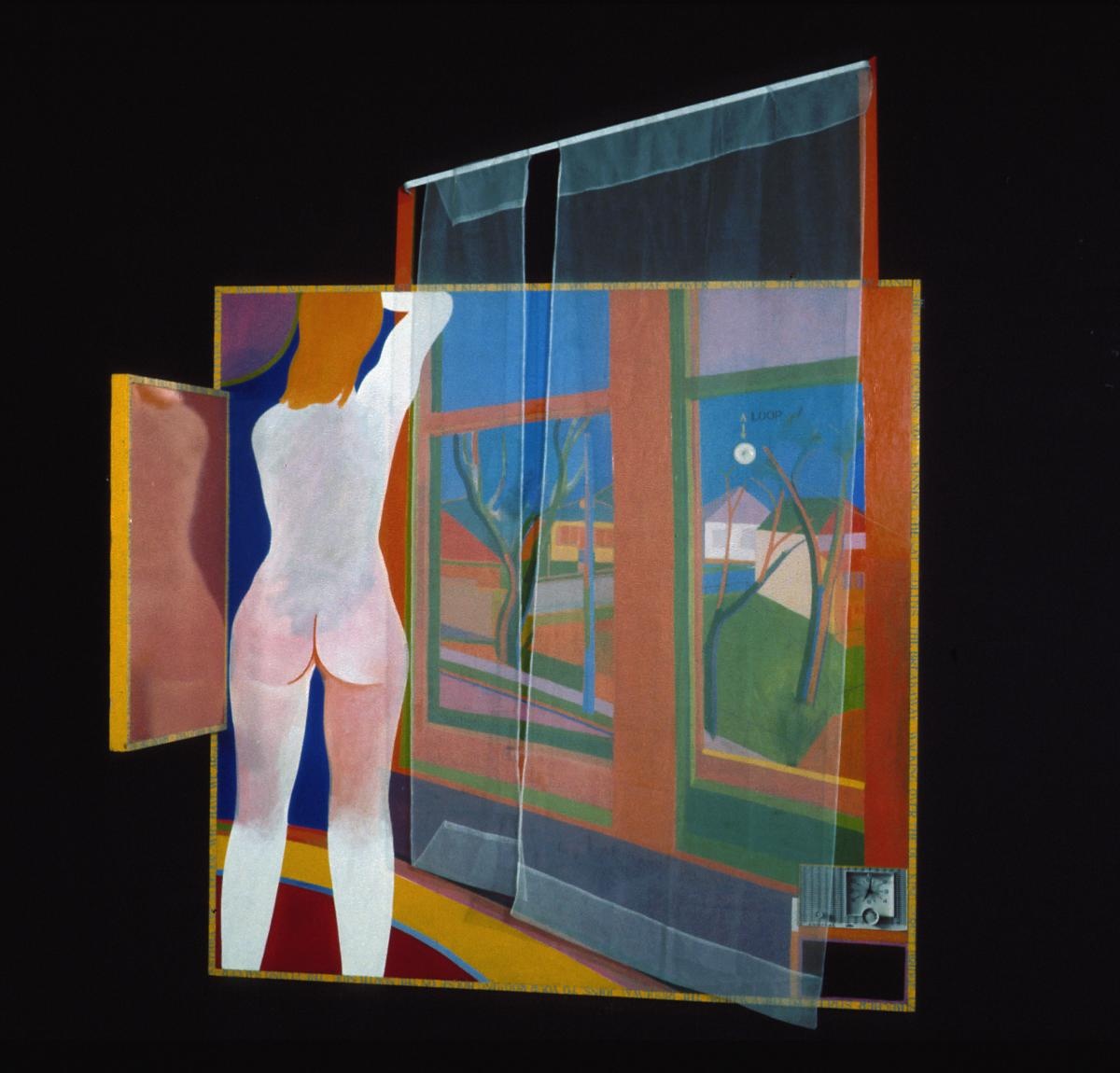 Greg Curnoe was a Canadian multidisciplinary artist, community leader and avid bicyclist, known primarily for his colour-saturated paintings and his activism in support of Canadian art. Born in 1936, Curnoe was fiercely loyal to his hometown of London, Ontario throughout his life and career. There’s a strong sense of personal history, authenticity and patriotism in his work, with nods to Canadian politics and pop culture. Comic book-style paintings, sculptures, installations, collages and text-based iterations form the scope of his artistic expressions.

While studying at Doon School of Fine Arts in Kitchener, and the Ontario College of Art in Toronto in the late 1950s, he became fascinated by Dadaism’s use of collage and text, and its emphasis on nihilism and anarchism.  He returned to London  in 1960 after leaving Toronto and fully immersed himself in art. Spring on the Ridgeway (1964) (above) was conceptualized and painted during this time of intense production and personal growth. This large-scale mixed-media work shows Curnoe’s formal experimentation with depth and dimension: overlapping geometric shapes contrast with the natural curves of the figure, all rendered in energized colours and an unconventional combination of materials. The complex composition features Curnoe’s wife Sheila Thompson, who often appears in his work. Here, Thompson stands before a window as if looking at a picture, putting viewers at a remove from their traditional position before the artwork. As the view out the window is the view out of Curnoe’s London studio, the work functions as a record of a specific time and place in his hometown.

More than an artist living in London, Curnoe worked as an art activist, community organizer, collaborator, gallery founder and mentor to younger generations of creatives. Alongside his contemporaries like Jack Chambers, Tony Urquhart, Kim Ondaatje, Murray Favro and John Boyle, he is considered a central figure in London Regionalism—a Canadian art movement established during the 1950s and 60s. For London artists like Curnoe, Regionalism encompassed art that was deeply enmeshed in the local culture of the area and deliberately positioned outside of other active art movements of the time period. Arguably, the Regionalists cemented themselves with the nationally touring exhibition, Heart of London, in 1968, which culminated in a stop at the National Gallery of Canada. Curnoe himself exhibited his work extensively across Canada and internationally throughout the 1960s and '70s; he represented Canada at the São Paulo Art Biennial in 1969 and the Venice Biennale in 1976.

Curnoe was a Canadian nationalist and not one to shy away from using art to express his opinions about the world around him. Take for example, 1967, when he was commissioned to paint a mural for the Montréal–Trudeau International Airport in Dorval, Québec. Almost immediately after its installation and unveiling in 1968, the mural titled Homage to the R 34 was criticized as being deliberately inflammatory and anti-American (Curnoe suggested it leaned more anti-war than anti-American). Among its vivid colours, stripes and outlined text in trademark Curnoe style, it references notable historical figures like Major G.H. Scott (British pilot of the R34), Muhammad Ali (African-American boxer and civil rights activist), Paul Joseph Chartier (an Albertan who failed to bomb the House of Commons), and Louis Riel (Canadian politician and Métis resistance leader). Cited as an example of censorship in Canada, the mural was later removed and placed in the National Gallery of Canada.

Curnoe began to shift his focus in the 1980s towards researching the Indigenous history of the land he occupied, prompting him to begin a series of text-based works titled Deeds. In the late fall of 1992, however, Curnoe’s life was tragically cut short at the age of 56 when he was struck by a pickup while riding his Mariposa bicycle. The AGO presented Greg Curnoe: Life & Stuff in 2001, the first major retrospective since his passing, featuring Curnoe’s multimedia work from the AGO Collection—a major hub for Curnoe artworks and research. His work is  exhibited across Canada and held in private and public collections.

Read about some of the Indigenous and Canadian art in the AGO Collection by the likes of  Norval Morrisseau, Michael Belmore, David Milne, Joyce Wieland and Marian Dale Scott, all on AGOinsider.