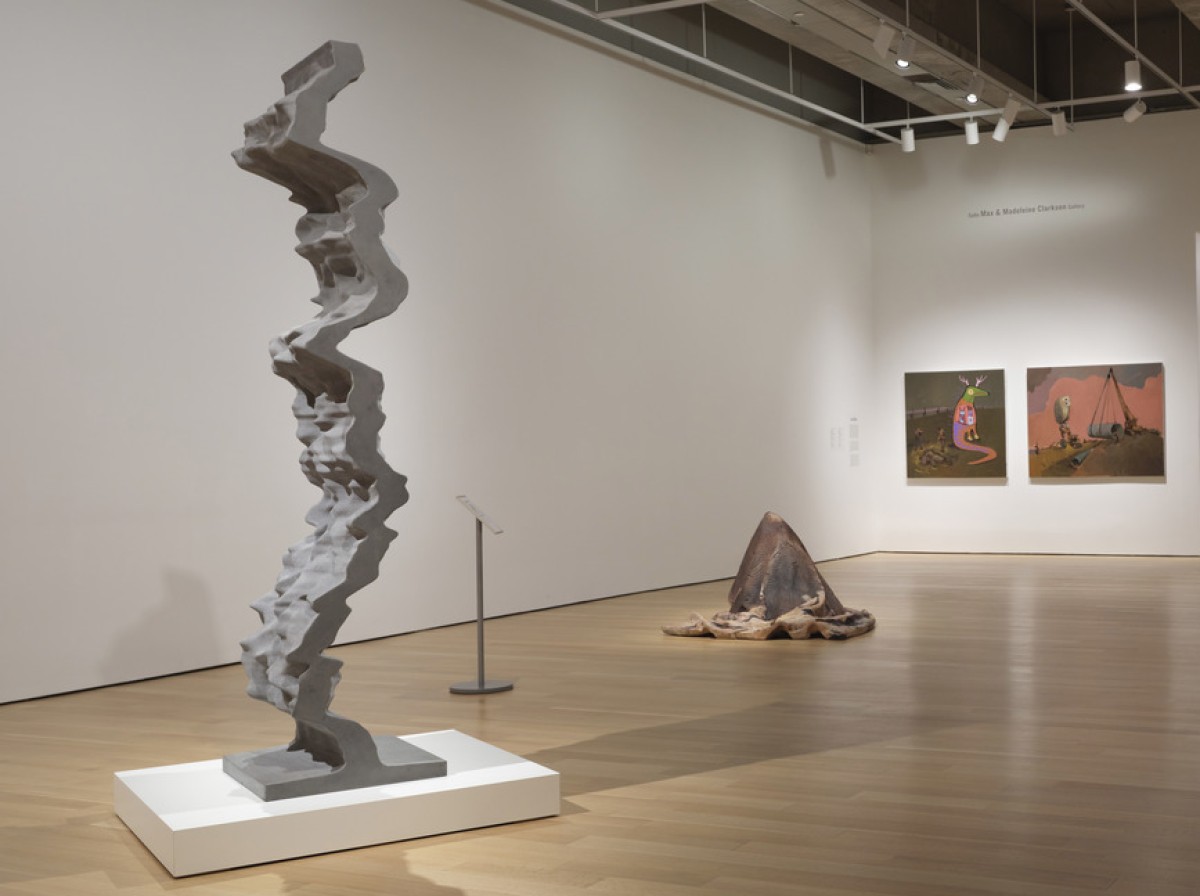 September 30 marks National Day for Truth and Reconciliation. This day, coinciding with Orange Shirt Day, recognizes the impact of the residential school system while honouring the children who never returned home and the survivors of residential schools, along with their families and communities.

Like last year, the AGO recognizes this day through continued learning guided by Indigenous art and artists. At its core, the J.S. McLean Centre for Indigenous + Canadian Art on Level 2 is dedicated to contemporary Indigenous art in its galleries. We invite all visitors to spend some time in the McLean Centre galleries to engage with art from several perspectives. One place to begin is with the work of Anishinaabe/French artist Caroline Monnet.

Monnet works interchangeably among media from film, installation and sculpture, reconfiguring industrial materials into distinctive hybrid forms. Her acclaimed practice comments on the complexities of Indigenous identity and the impact of colonialism. The Flow Between Hard Places (2019) (image above at left) is situated in conversation with works by Rebecca Belmore, Norval Morrisseau, Travis Shilling, Marianne Nicolson and a Haida artist once known. In gallery 234, titled Indigenous2Indigenous, this group of contemporary Indigenous artists contend with universal questions within the context of their own nations, delving into their histories and philosophies outside of the framework of Canadian art. Each in their own way acknowledges the legacy of Indigenous peoples as one of the founding nations – creating visible space in the wake of lost, stolen and confiscated lands.

Monnet materializes sound into monument with The Flow Between Hard Places. A towering presence, it’s a vertical concrete sculpture that embodies a soundwave of the word pasapkedjinawong (the Anishinaabemowin word for “the river that passes between the rocks”), as spoken by Elder Rose Wawatie-Beaudoin. Like steady river waters, these undulating waves echo the rise and fall of the pitch and tone of the soundwave. Monnet is referencing a pivotal moment in her ancestry when in the 1800s, Chief Pakinawatik from Kitigan Zibi (Maniwaki) and 60 other Algonquins travelled on 600 kilometres of waterways to ask the Governor General in Toronto to return parts of their traditional territory. These concrete waves symbolize speaking truth to power, the transference of knowledge, and the passage of time. “It’s important for people to have different types of monuments,” Monnet has said about the work. “In this case, the idea of using a sound and materializing into a sculpture that can become a monument is interesting, as is representing water as a monument. … It’s also quite contemporary, because we need those movements still today, when it comes to the environment, Indigenous rights, or any human rights around the world – we need people who are willing to travel that distance to be heard.” This work was commissioned by the Toronto Biennial of Art in 2019 and is the first work by Monnet to enter the AGO Collection. Monnet also has a solo exhibition in Toronto at Arsenal Contemporary, on view until December 2022.

Elsewhere in the building, Walker Court features Robert Houle’s ongoing installation Seven Grandfathers (2014), which echoes the traditional seven teachings in Anishinaabe culture. Naak silavit qeqqa? by ᓛᒃᑯᓗᒃ Laakkuluk Williamson Bathory on Level 1 explores the Inuit concept of sila – the life forces of the land (knowledge of the land, water, ice and environment). On Level 2, Victoria Mamnguqsualuk’s work brings stories of Qiviuq (Kiviug) to life through ink, coloured pencil and tapestries. Alan Michelson exemplifies the impact of colonization while celebrating Haudenosaunee ways of knowing. Bill Nasogaluak’s works are inspired by his Inuvialuit culture, the mythology and traditions of his people and the relationship between land and wildlife.

The AGO operates on land that is Michi Saagiig Nishnawbe territory. Toronto is governed by treaty 13 between the Mississauga of the Credit and the Canadian government. It has also been occupied by other Anishinaabe, Haudenosaunee and Wendat confederacies. Since 1701, Toronto is governed by the Dish with One Spoon treaty between the Anishinabeg, the Haudenausonee and allied nations to peaceably share and care for resources around the Great Lakes. Toronto is now home to a large diverse urban Indigenous population and always has been a trading center for First Nations. All people living in Canada are treaty people, including those who came here as settlers – either in this generation or in generations past – those who are arrivants, and those who came here involuntarily, particularly as a result of the Trans-Atlantic Slave Trade. As treaty people, we are all a part of a treaty relationship based on the recognition of respect, cooperation, partnership and Indigenous rights.

Admission to the AGO is always free for all Indigenous Peoples.