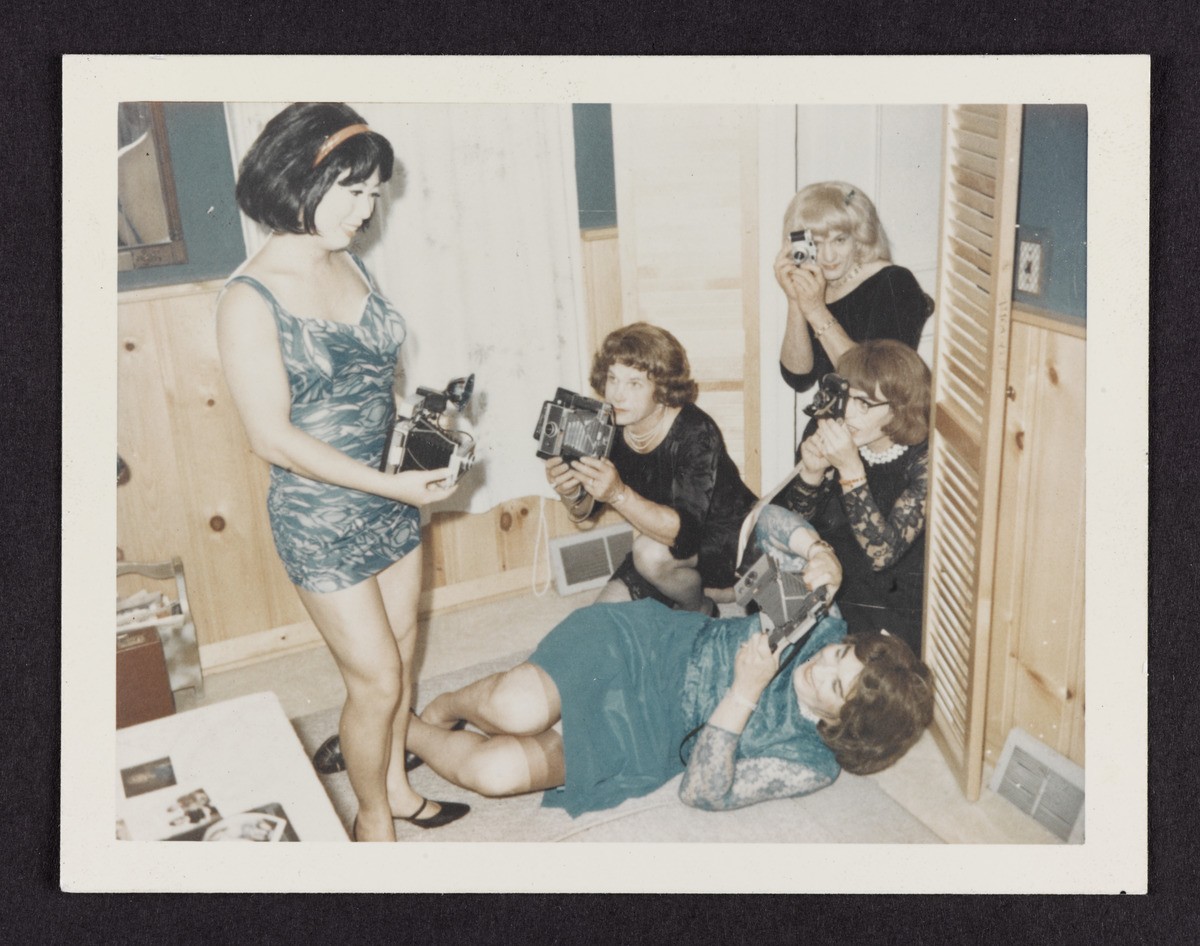 The Toronto International Film Festival (TIFF) is gearing up to make a much-anticipated return for its 47th edition, kicking off September 8. Among the many films making their North American premiere at TIFF ‘22, there’s one with a special connection to the AGO. From the mid-1950s until 1969, an underground network of cross-dressers found refuge at a modest resort in the Catskills region of New York State. The house, run by Susanna Valenti with the support of her wife Marie, was known as Casa Susanna.

The moving documentary of the same name, directed by critically acclaimed French filmmaker Sébastien Lifshitz, explores the story behind this gathering place and the people who went there seeking a safe space to live as women. Their stories are brought to life on film with archival footage and interviews, including those with former visitors Katherine Cummings and Diana Merry-Shapiro and select snapshots from the AGO’s Casa Susanna Collection. These amateur photographs are likely familiar to AGO visitors as 340 of them were acquired for the permanent collection in 2015 and featured in exhibitions such as What It Means To Be Seen: Photography and Queer Visibility in 2014 at the Ryerson Image Centre, Outsiders: American Photography and Film in 2016, and most recently, I AM HERE: Home Movies and Everyday Masterpieces in 2022. Photographs of the people who went to Casa Susanna and the Chevalier d’Eon (another resort for cross-dressers owned by Susanna and Marie) were first discovered by collectors Michael Hurst and Robert Swope at a New York flea market, going on to inspire a book in 2005 and Tony-nominated Broadway play in 2014.

Lifshitz was prompted to create the documentary in no small part by the work of photographic historian Isabelle Bonnet whose extensive research into these photographs identified many of the people and places shown. We spoke with Bonnet to learn more about her collaboration with Lifshitz and how the film came together. 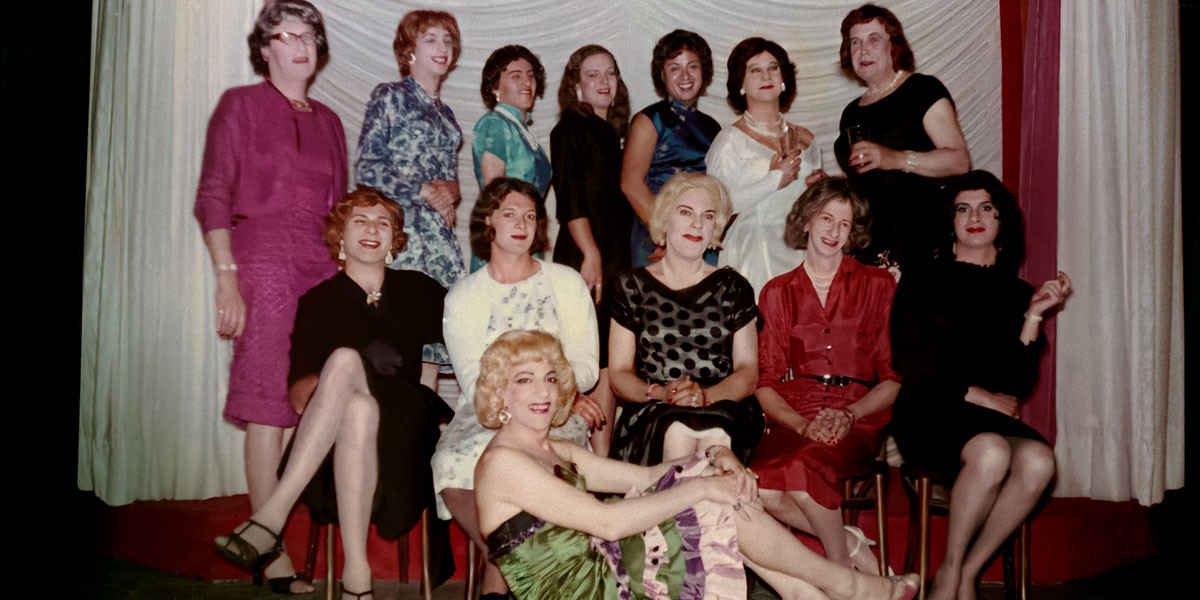 AGOinsider: For those of us who have yet to see the documentary, how would you describe it?

Bonnet: For those who have already heard about the so-called Casa Susanna photos (found in a New York flea market years ago) or even bought the book [by Michael Hurst and Robert Swope] published in 2005, I would say that the documentary lifts a veil on a mystery. For a long time, nobody knew who Susanna was, what had happened to her and who the people gathering at these resorts were. The film tells the story through the eyes of four people involved: Diana Merry-Shapiro and Kate Cummings, who were young cross-dressers; Betsy Wollheim, whose father was a friend of Kate and also another cross-dresser who went to the Catskills; and Gregory Bagarozy, who was Susanna’s grandson by marriage. For those who have never heard about these photos or this story at all, I would say the documentary is about gender identity during an era of ruthless repression and intolerance.

AGOinsider: Tell us about your involvement with the making of the documentary. How did that collaboration come about? What was it like working with filmmaker Sébastien Lifshitz and the rest of the crew?

Bonnet: The Casa Susanna photos and the network surrounding them were the subjects of my master’s dissertation at Paris 1 Sorbonne. In 2014, I was studying art history, with a specialization in photography. During my research, I came in contact with Kate and later, Betsy. My husband was convinced that the story was remarkable and a couple of years later, he proposed a documentary project about it to the TV channel ARTE. I started to dig a little bit more and that’s when I came into contact with two more people: Diana and Gregory. It took quite a while for the documentary project to really get started because Sébastien was not free at the time and I couldn’t find any other directors that I felt could “fit into” the project. Anyway, Sébastien was eventually available to direct and he was very excited about it.

In January 2020, we spent a few weeks in New York, where we met Diana, Gregory and Betsy. We went to spot the two resorts in the Catskills. We use the name Casa Susanna, but in fact, there were two places where people gathered. One was called the Chevalier d’Eon and it was sold in 1963 and the other one was Casa Susanna, which Susanna and Marie bought just a few miles away in 1964. In 2020, Casa Susanna was relatively untouched but was in a very bad state. It was for sale for years and was finally sold during that time [in 2020]. We were hoping that the new owner wouldn’t just completely renovate it, but unfortunately, he did. Photos of these renovations were sent to us a few months later. He had changed it so much that it didn’t look like Casa Susanna anymore. It was heartbreaking.

We were ready to film in the fall of 2020, but COVID and lockdowns were happening, so we postponed filming until October 2021. We stayed about a month, splitting our time between New York City and the Catskills. It went well. The very small crew we had was amazing. My collaboration with Sébastien was easy, and even I took part in the interviews. It was quite emotional for me, not only because this was the outcome of years of research but also because I could finally meet Kate, whom I was in contact with years before [Kate travelled from Australia to New York filming]. And most of all, I was glad that Diana and Kate, who are the last surviving Casa Susanna visitors, were able to tell their stories. I have tremendous admiration and respect for both of them, for who they are, and for their fight. I call them “warriors”. I have no doubt that viewers will feel the same. 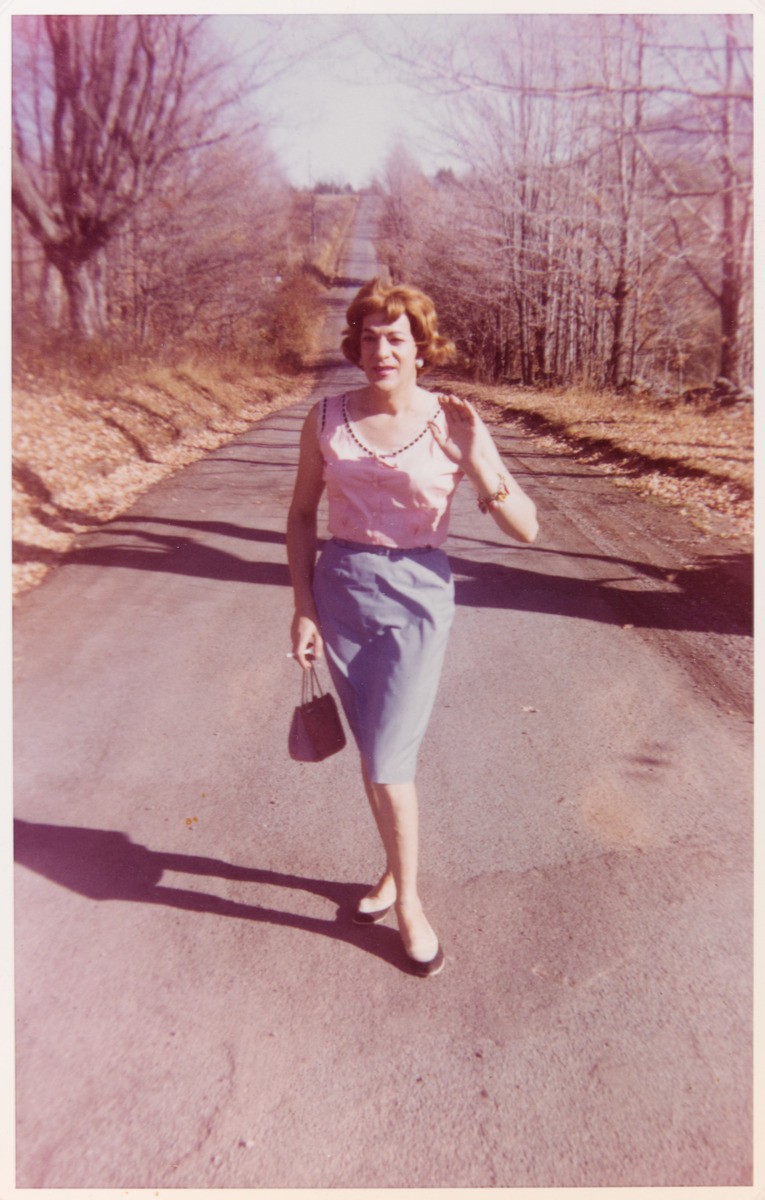 AGOinsider: Select photographs from the Casa Susanna Collection at the AGO are featured in the documentary. What was the selection process, going from 340 images down to just a few dozen? How were the photographs selected used to inform the structure of the documentary?

Bonnet: In addition to the AGO’s collection, we had at our disposal Cindy Sherman’s and Betsy’s collection of photographs. Betsy’s dad had taken an enormous number of photos while at Casa Susanna. And Cindy Sherman’s collection is, from my point of view, part of the Casa Susanna Collection at the AGO. We also had films from Gregory where Susanna appears as Tito, playing with Marie and the kids, and even a few minutes of Susanna playing as Susanna. We had a lot of content to work with. The choices for what to include in the film were mainly made by Sébastien and Tina Baz, our very talented film editor. It’s very hard to choose wisely to serve the narrative and to choose the appropriate number of photos — not too much, not too little. I was there only as a support, an adviser you could say, when Sébastien and Tina were unsure about identifying a place or a time in the photos. Luckily, the three collections are very consistent with each other concerning places and time, so the identification process was not a big problem. 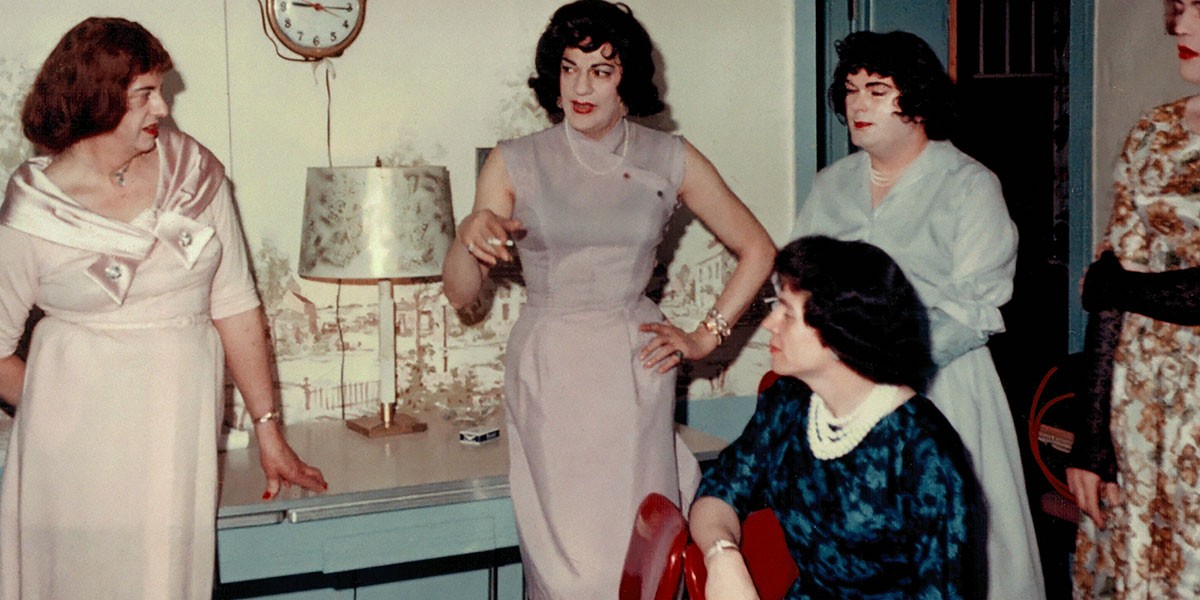 AGOinsider: At one point, Katherine Cummings and Diana Merry-Shapiro, the two central figures of the documentary who used to visit Casa Susanna, return to the house in the Catskills. Did your perception of the photographs and the people in them change once you saw some of the real-life settings?

Bonnet: Absolutely not! We actually filmed mostly at the location of the first house (or resort would be more accurate) called the Chevalier d’Eon (the name given by the cross-dressers at the time). It used to be a summer camp – built maybe in the ‘30s – which consisted of a large space with bungalows, a house and a barn. It was a side business for Marie who used to rent the bungalows to families in summer and it was officially called the “Silver Springs Cottages”. Marie used to advertise it in newspapers and magazines, I’ve found a copy of one of them. When I did my research, I had an address and I remember spotting the location of the Chevalier d’Eon on Google’s satellite map. But as time went on, I wasn’t sure if it was still standing. When we got there, I instantly recognized the place from the pictures. The bungalows were mostly still there, even though half of them had crumbled down. The house and the barn hadn’t changed from the outside. So, my perception was, in a way, stronger. It was just amazing to think that Diana and Kate had been there decades ago, to think that the people in the pictures had walked where I was walking (in high heels in the mud too!). In a way, the pictures became real. Yet, for Diana and Kate, it was a more real, vivid memory. For me, it was not so much. I imagine their emotion was far more intense than mine. 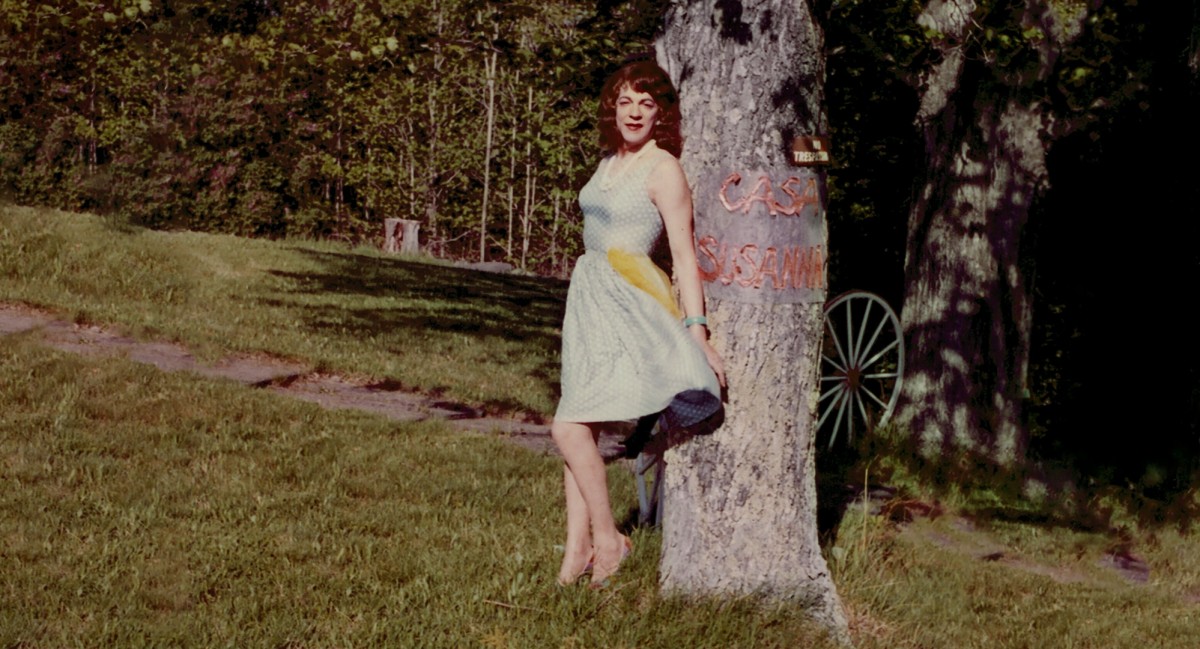 AGOinsider: The visibility and media representation of cross-dressers, transgender, non-binary and gender non-conforming people have evolved from when Casa Susanna was most active (the mid-1950s to the late 1960s). What do you feel is most important for today’s audiences to understand about these photographs?

Bonnet: I suppose that people willing to see the film are already aware of or, at least, open-minded to the issue [explored in the documentary] and they might not be the ones that need to be convinced to be more tolerant. I wish the film could reach a more conservative audience so that they understand first and foremost that cross-dressers, transgender, non-binary and gender non-conforming people have always existed. They were always part of our society and part of who we are. They have always been oppressed in Western society and because of this, they were forced to hide. They had no rights, no visibility, they were unheard of for decades. They were left to cope alone with their anxiety, their loneliness, and their rejection. This is what these photographs are about. This is what the film is about.

The second thing I would say to people, in general, is that it doesn’t matter if you don’t fully get the why. Acceptance and tolerance don’t need a full understanding. I’m a cisgender woman and because I’ve never been through what they’ve been through, I do not and will never know what it is. And yet, do I need to know exactly what people are feeling or experiencing to respect them, even if they are different from me? Of course (and fortunately) not.

And for most conservatives, I simply ask: to what extent do their rights remove some of yours? To what extent does their existence interfere with your daily life? To what extent their lives is a threat to yours? Diana and Kate's testimonies in the film are important because even though things have evolved in a good direction since the ‘60s, many transgender or non-binary people are still targeted or invisible. And I’m also thinking about cross-dressers. I’ve never seen in my whole life, a banker or a shopkeeper or a doctor, a teacher, who cross-dresses, at least in France. I’m sure they still don’t dare to cross-dress in their daily life because they know that not only would they be mocked, but they would surely be assaulted. Progressing tolerance is still much needed. Also, we all know that what progress was gained in the ‘70s and the decades after is very fragile today, very much jeopardized by violent reactionary ideologies regaining strength everywhere, in the U.S., in Europe, and probably in Canada, too. I’m afraid dark clouds are piling up above our heads. Films like this one are needed and if it somehow helps open up the mind of one single conservative viewer, I’d be thrilled.

TIFF ‘22 runs from September 8 to 18. Get your tickets for CASA SUSANNA here and read up on the rest of the festival lineup here.