What is the first thing you notice when you look at this chalk drawing of a French revolutionary from the late 1700s? His bold, red bangs are hard to miss. We’re surrounded by a variety of hairstyles in our day-to-day lives. But do we automatically connect them with class politics? This portrait reveals how hair was, and always will be, a political statement.

Although we don’t know the artist behind this portrait, we do know what was happening in France in the late 1700s. The tensions between the monarchy and the government had come to a head during the French Revolution (1789-1799). With massive political shifts also came shifts in popular hairstyles and fashion. Big, powdered wigs favoured by the aristocratic classes and complicated hairpieces held together with expensive ornaments fell out of mainstream fashion. As the revolution progressed, and the people of France fought for liberty and equality, they also began to embrace their natural hair.

The long bangs and the feathered “flip” of this proud revolutionary Frenchman is a spin on the “Caesar” cut. The Caesar, a short style with straight, horizontally cut bangs originally became a popular style for free citizens under the Roman Empire. Napoléon Bonaparte, who was to become the first self-appointed emperor of France in the early 1800s, was one of the first French leaders to rock his natural hair.

Watch AGO Youth Council member Nara Wrigglesworth teach you how to cut your own bangs. If you’re feeling particularly revolutionary, give yourself or someone in your life a Caesar cut (or maybe the “Napoléon” look is more your style)!

Nordstrom
 This is an Accessible Event. Learn More
Share 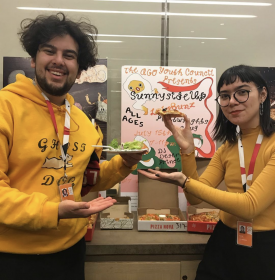