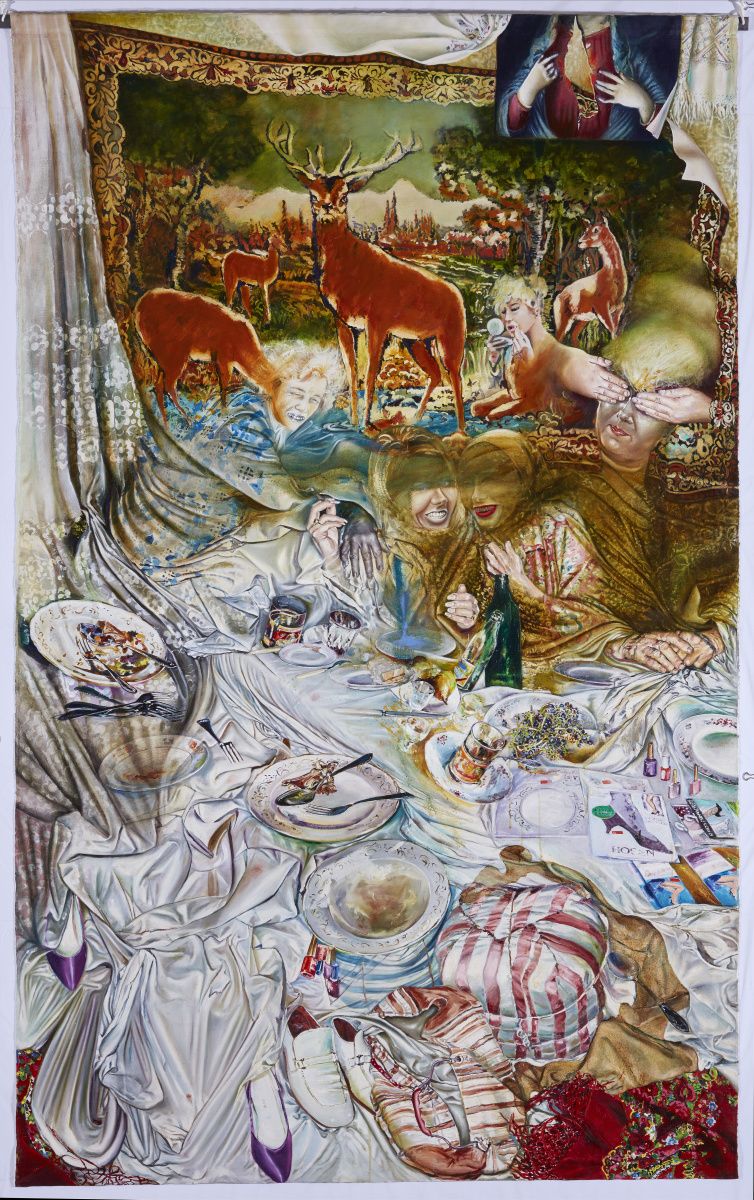 For this Art Pick, we’re exploring a recent acquisition by the AGO in 2021, located on Level 2 in the J.S. McLean Centre for Indigenous & Canadian Art. Torn Heart by Natalka Husar is a large unstretched, oil-on-linen painting, part of a series called Black Sea Blue. Inspired by a trip to Ukraine with her mother in 1992 — the first for Husar since 1969 during the country’s Communist regime — the artist created most of these paintings shortly after her return to Toronto, explaining to the Toronto Sun in 1995: “I painted the people who haunted me like the young girls adorned with Soviet-style bows. They are the future, but they have the impact of the past on their faces. […] What I [saw] was a place that was severely damaged. And not just by Chernobyl. It’s a more subtle damage.”

The daughter of Ukrainian immigrants to the U.S., Husar was born in New Jersey in 1951 and graduated from Rutgers University in 1973 with a bachelor’s degree in fine arts. She moved to Toronto that same year, having since steadily built her career as a painter and later an educator at OCADU, exhibiting her work in Canada and abroad since the early 1980s. Ukrainian identities highlighted through the North American immigrant experience and womanhood are convergent themes in her work, expressed almost exclusively through large-scale oil paintings. Husar’s identity, and by extension her art, is split between North America and Eastern Europe, drawing the curtain back on the nostalgic romanticism and harrowing realism of both places.

Much like all the paintings in the series, Husar presents an unflinching, unflattering composition exquisitely painted in Torn Heart. Spend some time with it and you’ll be swept up in its visceral quality as if woven together from Husar’s dreams and disintegrating memories of her ancestral homeland. She sifts through haunting images to reveal a collage of disjointed vignettes brimming with Ukrainian iconography, personal and art historical references. Certain elements draw your attention at first glance, like the kitschy wall hanging featuring a male deer proudly standing, surrounded by three grazing fawns at the top of the canvas (Husar has stated that these kinds of wall hangings are often included in care packages from Canada to Ukraine). Or to its right, a poster of a headless Madonna with her heart torn from her chest.

Shift your gaze to the centre of the canvas to see phantom figures of women and disembodied manicured hands—Husar often situates herself in her work, either with self-portraits or invented characters that act as her stand-ins. Unkempt sheets, curtains, tablecloths and a Ukrainian shawl towards the bottom of the canvas look decidedly ‘lived in’; littered with dirty dishes, shoes, nail polish, pantyhose, an empty duffel bag and other remnants. Torn Heart speaks to both decadence and decay; an unsettling divide between the excessive consumption in North American culture and feelings of displacement within the Ukrainian immigrant community in the post-Cold War era. Many artists explore what it’s like to leave a homeland, but in this work, Husar explores what can be unveiled by returning.

Once the AGO reopens, make sure to visit Torn Heart (1994) in the J.S. McLean Centre for Indigenous & Canadian Art on Level 2. Somewhere hidden is Husar’s signature in Ukrainian script. We have yet to spot it – maybe you can! Stay tuned for our next Art Pick and more stories about the AGO Collection.

In case you missed them, read stories about Shuvinai Ashoona’s Curiosity (2020) and Shelley Niro’s This Land is Mime Land (1992).