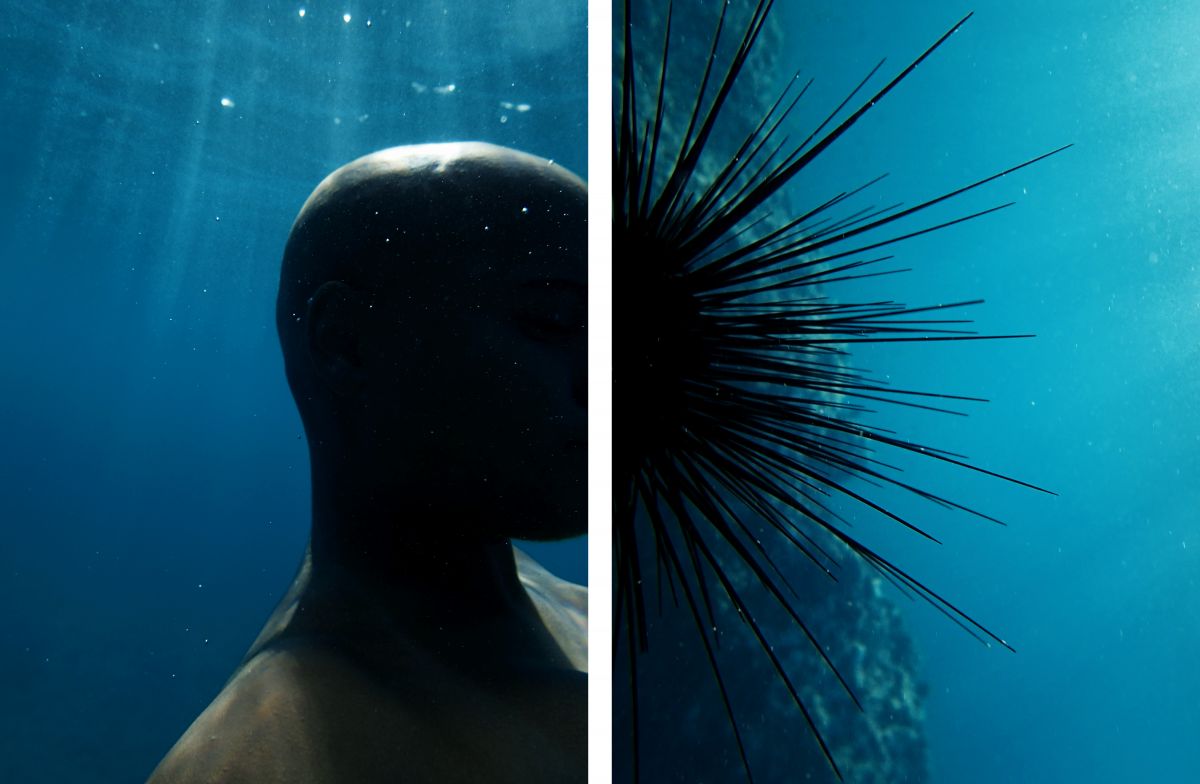 Born in Trinidad and Tobago, based in St. Vincent and the Grenadines, Nadia Huggins has been working as a photographer and director since 2010. Self-taught and working in digital, she documents everyday scenes of Caribbean landscapes and seascapes with poetic sensitivity, centred on belonging, identity and a re-framing of the Caribbean region and its people through a contemporary lens. Her  photographs have been featured in exhibitions staged in various Caribbean island nations, as well as Ethiopia, France, the US and now again in Canada, with Fragments of Epic Memory. On view until February 2022, the AGO’s explorative exhibition ventures into the region’s legacy and includes two works by Huggins: Transformations No. 1, diptych (image above) and a standout work,Circa no future (2016-2019), a single-channel video clip that shows adolescent boys jumping fearlessly into the sea from a high cliff.

To learn more about her practice and approach, we connected with Huggins, working from her home studio in St. Vincent and the Grenadines.

AGOinsider: Bodies of water, namely the Caribbean Sea and the Atlantic Ocean, are recurring themes in your work. You often describe the ocean as a liberating, transformative space that allows a 'reimagined self' to emerge once underwater. Why were you drawn to photograph and film underwater, and what about it keeps you interested?

Huggins: I became interested in photographing the ocean because I realized there was a lot of unexplored imagery that wasn’t representing my lived reality, or at least, nothing that I was personally aware of at the time. Outside of the usual scientific documentation of marine life and touristic images of people swimming or snorkelling along the shores, I felt as though there was more happening in the sea that needed a lens pointed at it. I wanted to explore this world myself, in much the same way I would on land as if I were walking down the street and observing life through my perspective. I’m still interested in the sea because of its unpredictability. While certain fundamental elements remain in the same places, coral, landmass and the perspective of the horizon, for example, constant changes are happening in the way light is displaced through the surface, the rising and falling of the tides and the trailing of the currents. When things look different daily it allows for new perspectives. It requires a certain level of discipline to observe these slight, somewhat monotonous changes over time. For me, it’s through the repetition of photographing the same things over and over that I hope to see something new.

AGOinsider: The single-channel video Circa no future began as a photo series about the performative aspects of gender, Black Caribbean masculinities and adolescence. What prompted you to choose video as the medium to explore these concepts further?

Huggins: While there is beauty in pulling a single moment out of a sequence of events to suspend the body in time, it’s the flow of that sequence that really shows the gracefulness and vulnerability of the male body underwater. There are so many elements moving simultaneously in tandem with the body like the way the light and water are constantly changing is such an important component to creating that immersive experience; it’s really part of the magic of being there. I know everyone has a very different relationship with the sea—some of us feel liberated, while others are terrified—but I wanted to create the safety of immersion for those who can't or won’t go there. I also wanted to play a bit with sound to build on this immersive experience. Sound is such a crucial part of Caribbean culture, and with photographs, it’s hard to create a soundscape that evokes this. The sound in the video is the blowing of a conch shell but reversed and slowed down to replicate the eeriness and muffled nature of sound underwater. Sometimes we might think vast places like the ocean are void of subtle sounds but for me, I spend a lot of time floating with my ears submerged just listening to sand and rocks scratching against each other. Sometimes you can even hear a parrotfish biting into a piece of a reef!

AGOinsider: Part of your work speaks to the detrimental effects of climate change and the increasing occurrence of natural disasters in the Caribbean, like the recent La Soufrière eruption in St. Vincent and the Grenadines. The Transformation series is an example of this work and you’ve described the series of diptychs as documentation of familiar scenes you grew up around and how they have degraded over time. Why is it important for you to document your lived experiences dealing with climate change and position yourself within these works?

Huggins: I grew up hearing older people reference certain places that used to look a particular way, and I always found it strange that there was never a detailed record of these changes. It wasn’t only huge landscape changes, but in the small details that eventually amount to bigger changes. This time that I am living in now seems to be one of the most critical moments with regards to our changing climate. We are at a crossroads to start making some crucial decisions about how we choose to live more expedient lives. I document these experiences of changing landscapes and seascapes so that future generations will have a frame of reference that they can relate to. Small islands are some of the most vulnerable places to climate change. Our shorelines are majorly at risk of rapidly disappearing. Many people that live on these islands look similar to me, so it’s important to place myself in the image because we are the ultimate recipients of the oncoming threat and sometimes it’s the familiar faces that drive that message home.

AGOinsider: What has been one of the most striking environmental changes you've seen and how has it influenced your work?

Huggins: From a natural disaster perspective, witnessing the explosive eruptions of the La Soufrière volcano has been life-changing. I was able to hike up the volcano and document the crater both from inside and also from the summit before the first effusive eruption which began in December 2020. After the explosive eruptions that occurred in April 2021, I was able to revisit the volcano from the perspective of the summit looking into the crater in September 2021. Seeing the sheer force and power of these epic changes helped me to understand how alive the earth is. I think intellectually I always knew this, but seeing it first-hand in that way was humbling. That experience influenced me to place more importance on creating a detailed record of the places on these islands and not wait for permission to do it. 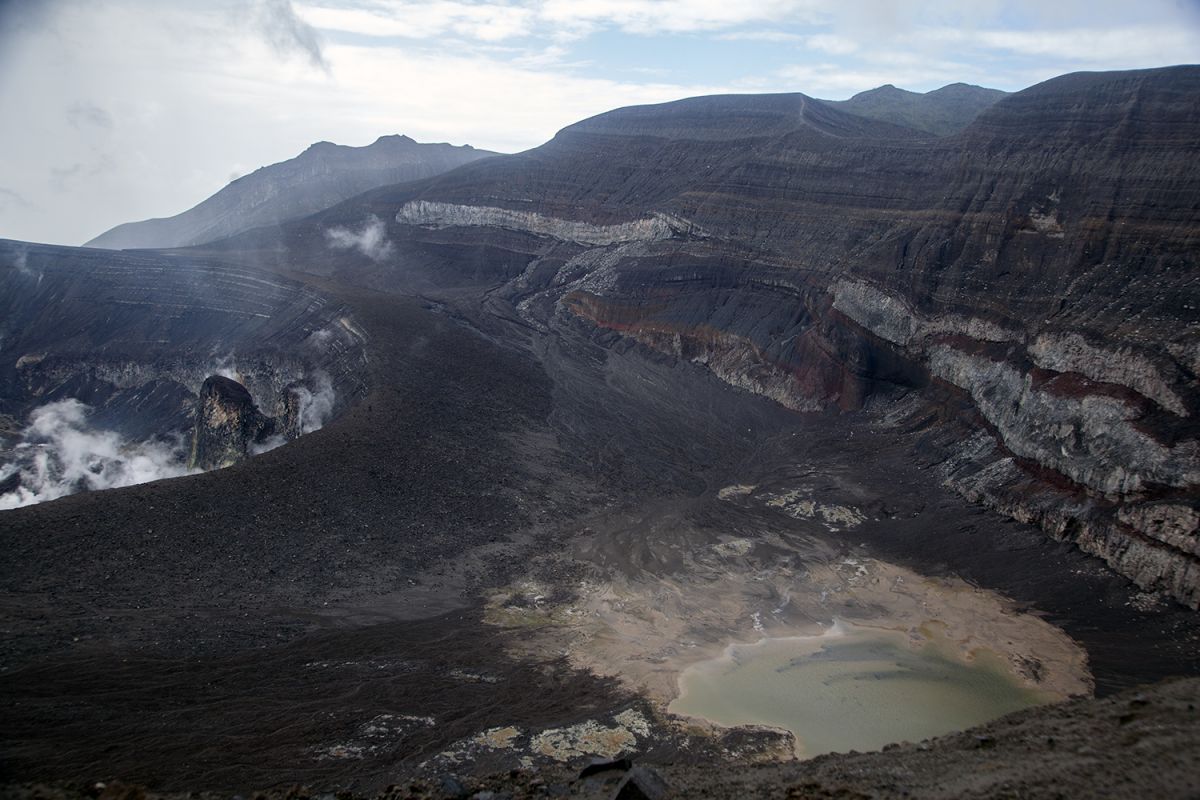 AGOinsider: Are there connections to be made between your work and the depictions of post-emancipation Caribbean life in the AGO’s Montgomery Collection? What similarities and differences can you see?

Huggins: Yes, I think, especially now moving forward, [the Montgomery Collection] is a great frame of reference to challenge how the Caribbean has been photographed. It prompts [Caribbean artists] to start seriously thinking about how we can deconstruct these images and formulate new images of who we are from our perspectives. The natural environment seems to be the anchoring factor in both historical and contemporary imagery and it’s what fundamentally makes the Caribbean such a special place. However, the way these spaces have been exploited or overdeveloped has manipulated a lot of our landscapes and seascapes. The difference between then and now is the outsider's gaze. I think it’s important for us to take a good, hard look at these images and understand why some of them might make us uncomfortable and how we can work towards deviating from replicating them over and over again in subtle ways. It’s really difficult to create something new when your frame of reference has always flooded your history books, rum labels, and tourism websites. The responsibility of the image is now ours to be mindful of moving forward.

AGOinsider: Is it accurate to say that working as a photographer and director based in and working from the Caribbean presents a unique set of circumstances? What do you feel is most significant about an exhibition like Fragments of Epic Memory?

Huggins: Yes, it is very challenging being based here and working. Creating the work in these spaces is not so much the challenge, but getting it out to an audience and creating context is always difficult. Thankfully the internet has allowed some leverage in that, but printing, shipping, networking and finding a community to engage has always been tough. The most significant part to me about being in Fragments of Epic Memory is having my home and people be seen. Some of these young boys [in Circa no future ] might never have an opportunity to travel to another place, so it feels important to at least have their experiences seen by a global audience and maybe that will give rise to new possibilities for them.

Fragments of Epic Memory can be seen on Level 5 of the AGO until February 2022. Book your ticket now and keep reading AGOinsider for more highlights from the exhibition like this Q&A with multi-hyphenate artist Gomo George.

Huggins has been featured in numerous publications, including in the 2020 compilation book Black Futures. AGOinsider spoke with the book’s editors, Kimberly Drew and Jenna Wortham, in this Q&A story.