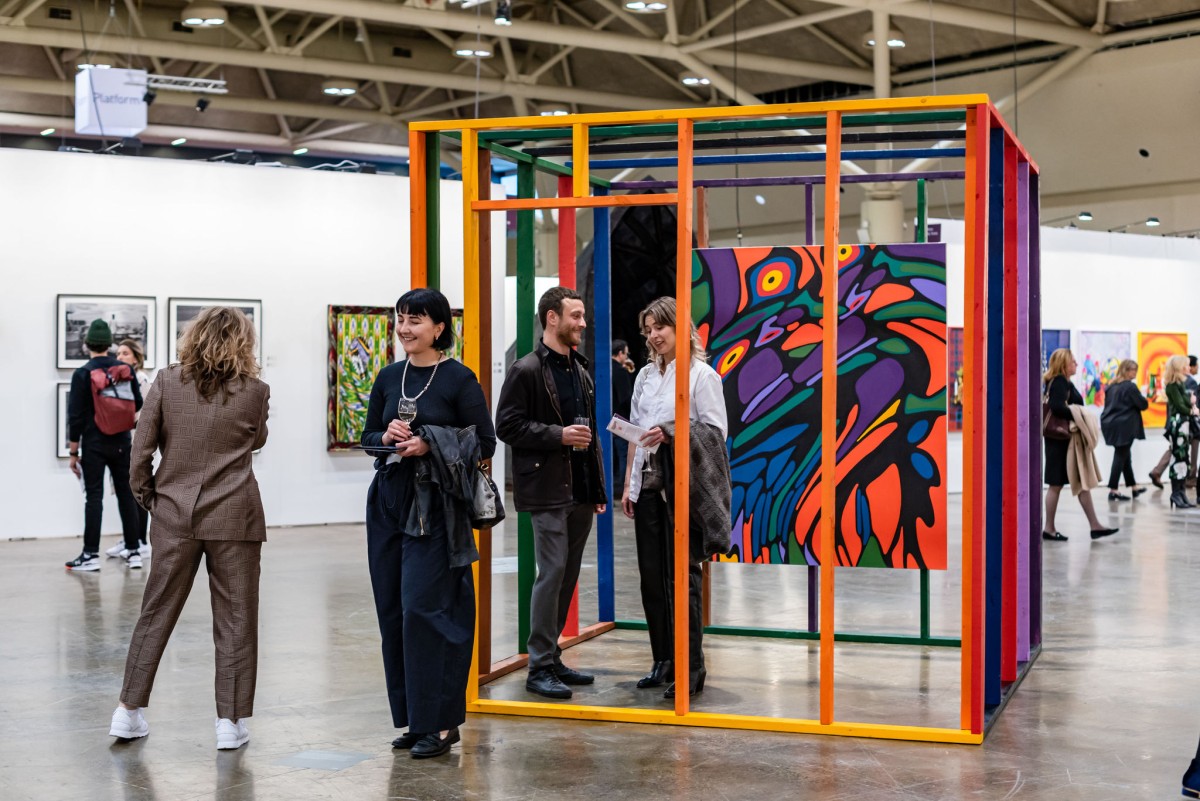 Art Toronto marked a triumphant return to in-person festivities this past weekend, welcoming galleries, artists, curators and collectors from across Canada, the United States and Korea. In addition to the more than 90 galleries showcasing artworks, there was a focus exhibition, curated by Marie-Charlotte Carrier, featuring a mix of contemporary and historical artworks, in addition to many talks and tours.

The fair also provided AGO curators with an exceptional opportunity to acquire new art and bring new voices into the museum. Of the 17 works acquired across four collecting areas, eight are by artists new to the AGO Collection. Here’s a roundup:

Arts of Global Africa and the Diaspora

The AGO’s Department of Arts of Global Africa and the Diaspora has acquired two photographs by the Nigerian-born, Toronto-based artist Isabel Okoro, and a sculpture by Hamilton-born artist Jan Wade. These are the first works by Okoro and Wade to enter the AGO Collection.

“One of the great delights about this iteration of Art Toronto (compared to recent years) is the range of artists representing Africa and the Diaspora,” says Julie Crooks, AGO Curator, Arts of Global Africa. “I am thrilled to add the work of well-known Hamilton born artist Jan Wade, while also building the collection with work by a new generation of makers such as Nigerian-born, Toronto-based photographer Isabel Okoro, both of whom are working to memorialize Black existence and experiences.”

The AGO’s Department of Indigenous and Canadian Art acquired eight artworks by three artists. For the first time, the AGO welcomed a trio of sculptures from multidisciplinary Mi’kmaq artist Ursula Johnson, and two photographs and two multimedia sculptures by multidisciplinary Inuvialuk artist and curator Kablusiak. The AGO also adds a beaded installation to its collection of works by the contemporary Inuit artist Niap.

“The three artists we have purchased at this year’s art fair represent a new generation of Indigenous artists from east to west to north that are innovating in material histories that are as old as this land,” says Wanda Nanibush, AGO Curator, Indigenous Art. “Carrying deep knowledge of our past with a playful, irreverent, meaningful and storied contemporary practice, these artists are an important addition to the AGO Collection.”

The AGO’s Department of Modern and Contemporary Art acquired new works by the artists Ghazaleh Avarzamani, Alicia Henry and Caroline Monnet. These are the first works by Avarzamani and Henry to enter the AGO Collection and the second by Monnet.

“Avarzamani’s monumental work, Game of Goose, is a textile map made from 180 sapphire-coloured loofah mitts embroidered in luminescent white thread to reveal an image of one of the world’s oldest board games. The artist, represented for the first time in the AGO Collection, is interested in how game and play often reveal the moral, social and spiritual framework of our societies,” says Xiaoyu Weng, the AGO’s Carol and Morton Rapp Curator, Modern and Contemporary Art. “Alicia Henry’s stirring and poetic works from the Untitled series each feature the silhouette of a corporeal figure in mixed media that appear to harbor the limbs of other forms inside of them. Henry’s extensive practice deals with questions of layering, relationality and unfixed identity, often in the form of powerful two-dimensional compositions. A striking work of red and orange-threaded embroidery on a canvas of pink, plastic polyethylene, Fur Queen 03, is the second work by Caroline Monnet to enter the AGO Collection. The Anishinaabe and French artist has found a powerful formal language of geometry and circuitry wrought through common construction materials and waterproof membranes. The artist invokes the inequality of building projects, policies, zoning laws and land division within the context of colonial Canada.”

The AGO’s Department of Photography has acquired two new images. This is the first work by Emmanuelle Léonard, a finalist for the 2012 AIMIA-AGO prize, to enter the AGO Collection. Added to the AGO’s considerable collection of works by General Idea is a photo of Carole Pope.

“These two artists thoughtfully and playfully make use of the photographic medium, to shape our sense of their time and place,” says Sophie Hackett, AGO Curator, Photography. “Emmanuelle Léonard’s vivid document of Montréal’s pandemic curfew, made with a thermal camera, expresses the increased surveillance of people in public space during that time; the meagre physical interactions many had; as well as the risk of front line workers. Made for Rough Trade’s 1980 album Avoid Freud — featuring their most well-known track High School Confidential — the contact sheet of lead singer Carole Pope is a study in icon-making. Posing in a Thierry Mugler jacket, with a martini glass, Pope is the epitome of Queer cool. General Idea once again deploys the photographic image for its symbolic power and skewers it at the same time.”

Art Toronto continues online at Artsy until November 13. Art Toronto will return! Stay tuned for the announcement of 2023 fair dates and details.