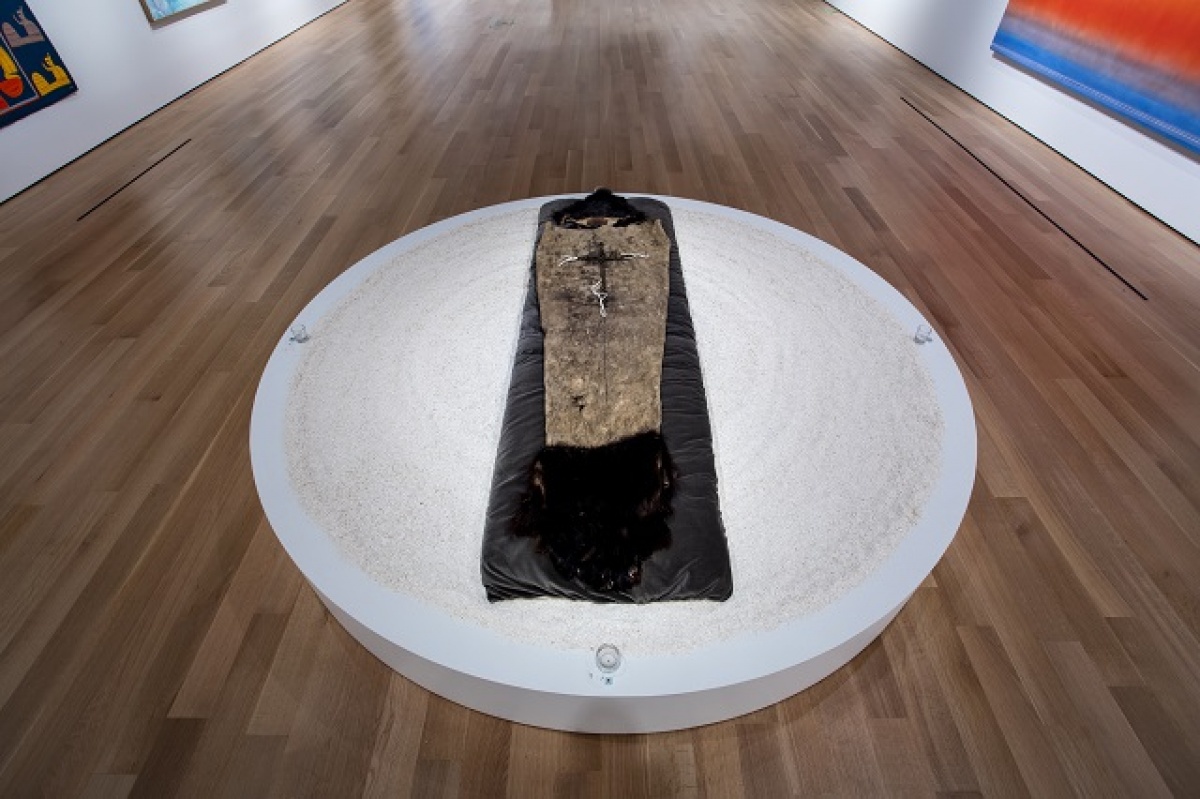 For artist Tim Whiten, rebirth is a critically important concept. The bearskin pelt used in his work Metamorphosis, on view in the J.S. McLean Centre for Indigenous & Canadian Art, is a majestic symbol of that.

“The piece is about birth and rebirth,” Whiten says. “It’s a remnant, a memory device.” In 1968, Whiten left his home in the United States to accept a teaching position in Toronto. Ten years later he performed a ritual, aptly named Metamorphosis, which served as a metaphor for his physical and spiritual arrival in Toronto. During this incredibly personal performance, Whiten was sewn into the bearskin by two taxidermists. He then worked to free himself from the pelt without using his hands, much like a butterfly emerging from a chrysalis.

As with many of Whiten’s works, Metamorphosis uses non-traditional materials. Some of his other works include the use of skulls, hair, blood, coffee grounds and more. In Metamorphosis, the ritual vessel, made of tanned bearskin, brass bells and cotton ties, is laid on a cotton pillow atop a bed of crushed eggshells. The vessel is surrounded at each cardinal direction (north, east, south, and west) with four votive candles and incense tiles which were ceremoniously lit during installation.

Sherry Phillips, AGO’s Conservator, Contemporary and Inuit Art, says it’s an interesting work to protect. The nature of the materials in the work means the AGO’s conservation team inspects it weekly to monitor for pests that might harm the bearskin.

Metamorphosis has been on a journey of its own, having first appeared in Toronto in 1978 as the ritual performance, called Metamorphosis Stage I. The second stage of the work was presented in 1980 when the bearskin pelt was showcased at the Bau-Xi Gallery in Vancouver. During the same year, the third stage of the work was marked by the completion of the ritual performance, also at Bau-Xi Gallery. Metamorphosis Stage IV showcased the bearskin pelt ceremonially laid on a cotton pillow within a box made of wood and glass at Toronto’s Olga Korper Gallery in 1989.