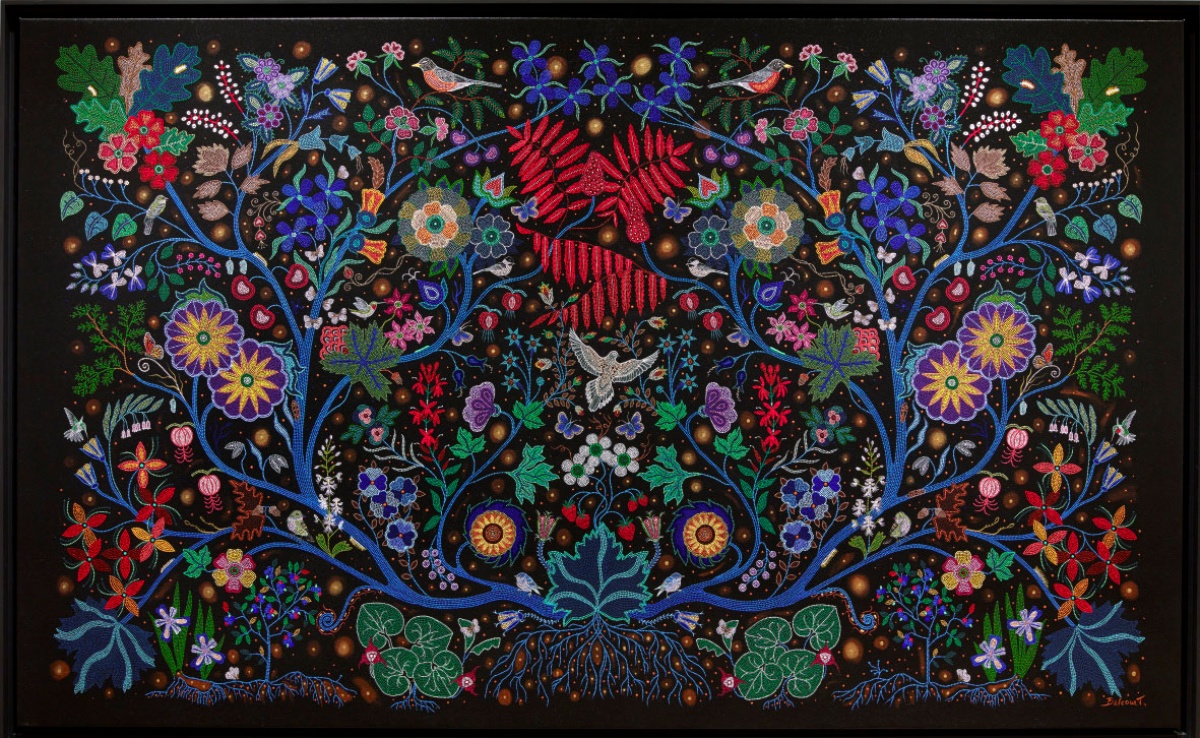 The AGO has commissioned and acquired an extraordinary painting entitled The Wisdom of the Universe by Christi Belcourt, a Métis visual artist and author who received the 2014 Ontario Arts Council Aboriginal Arts Award at a ceremony held here on July 30, 2014. Below, Belcourt discusses the ecological concerns that inspired the work.

In Ontario, over 200 species of plants and animals are listed as threatened, endangered or extinct. Of those, included in this painting are the Dwarf Lake Iris, the Eastern Prairie Fringed Orchid, the Karner Blue butterfly, the West Virginia White butterfly, the Spring Blue-eyed Mary, the Cerulean Warbler and Acadian Flycatcher.

Globally, we live in a time of great upheaval. The state of the world is in crisis. We are witness to the unbearable suffering of species, including humans. Much of this we do to ourselves. It is possible for the planet to return to a state of well-being, but it requires a radical change in our thinking. It requires a willingness to be open to the idea that perhaps human beings have got it all wrong.

All species, the lands, the waters are one beating organism that pulses like a heart. We are all a part of a whole. The animals and plants, lands and waters, are our relatives each with as much right to exist as we have. When we see ourselves as separate from each other and think of other species, the waters and the planet itself as objects that can be owned, dominated or subjugated, we lose connection with our humanity and we create imbalance on the earth. This is what we are witnessing around us.

The planet already contains all the wisdom of the universe, as do you and I. It has the ability to recover built into its DNA and we have the ability to change what we are doing so this can happen.

This work is one of two paintings by Belcourt currently on display in the Gallery. In the video below, Belcourt discusses the other, entitled So Much Depends Upon Who Holds the Shovel (2008), which appears in our exhibition Before and after the Horizon: Anishinaabe Artists of the Great Lakes.