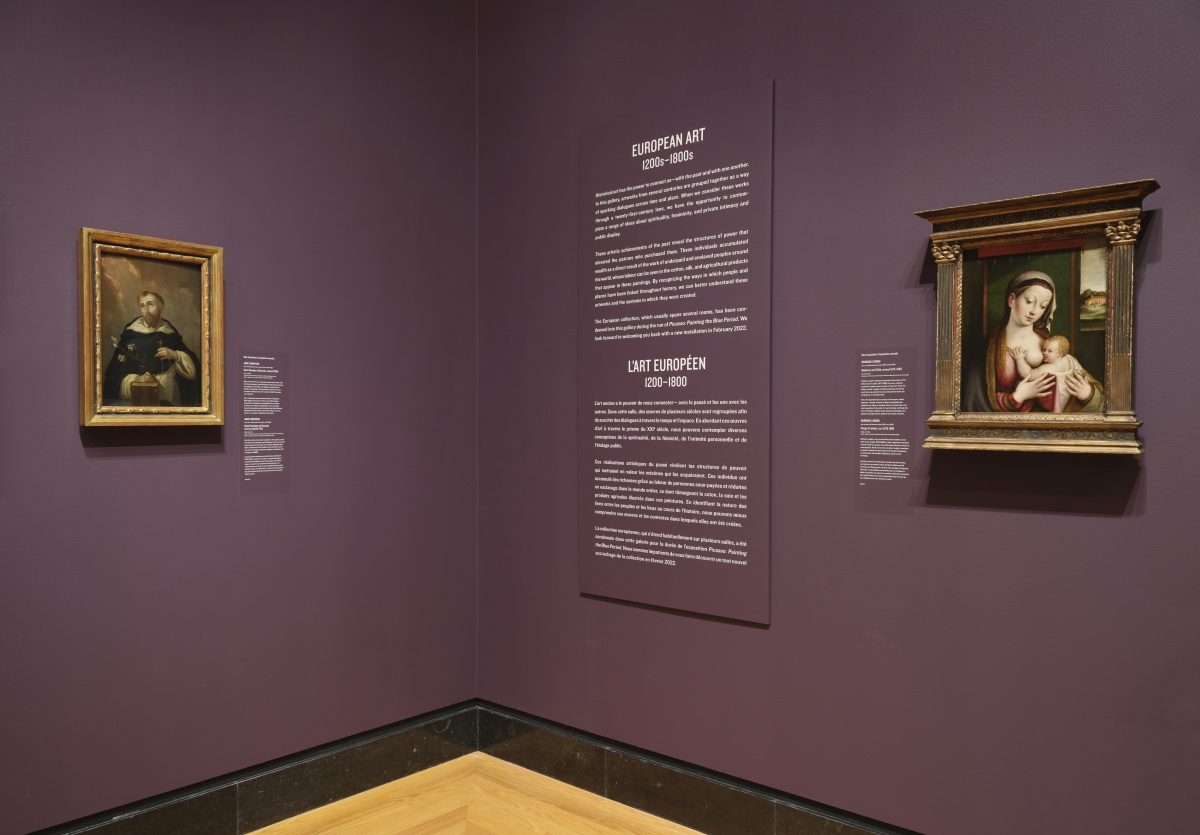 The AGO’s European Galleries are undergoing some big changes. Certain galleries are being transformed into something blue as our staff work hard to prepare for the unveiling of Picasso: Painting the Blue Period  in October. For those still looking for a taste of the Impressionist and Renaissance masters, the AGO’s European Art Department, spearheaded by Caroline Shields, AGO’s Associate Curator and Head of European Art, and Adam Harris Levine, Assistant Curator of European Art, presents Highlights of the European Collection, a new installation in Leonard Gallery, on view now until Feb. 2022.

We’ll talk more about this exciting installation and its many themes in the weeks to come, but first allow us to present the two newest additions to the AGO’s European Collection, making their grand debut here. Madonna and Child (1575–580) by Barbara Longhi, depicts the Virgin Mary breastfeeding the infant Christ at home, seated beneath a sumptuous red canopy. She wraps her newborn in her rich, fur-lined robe. And just behind them, through the window, is a pastoral landscape showing small figures outside of a farmhouse. This religious image of the Virgin and Child has been seen often throughout art history since the 12th century when European Christianity saw a rise in devotion to Mary (check out our current exhibition Meditation and the Medieval Mind on view now that examines this). Italian painter Longhi captures the motherly bond of the two in an exquisite oil painting boasting delicate lines and a soft, warm colour palette. 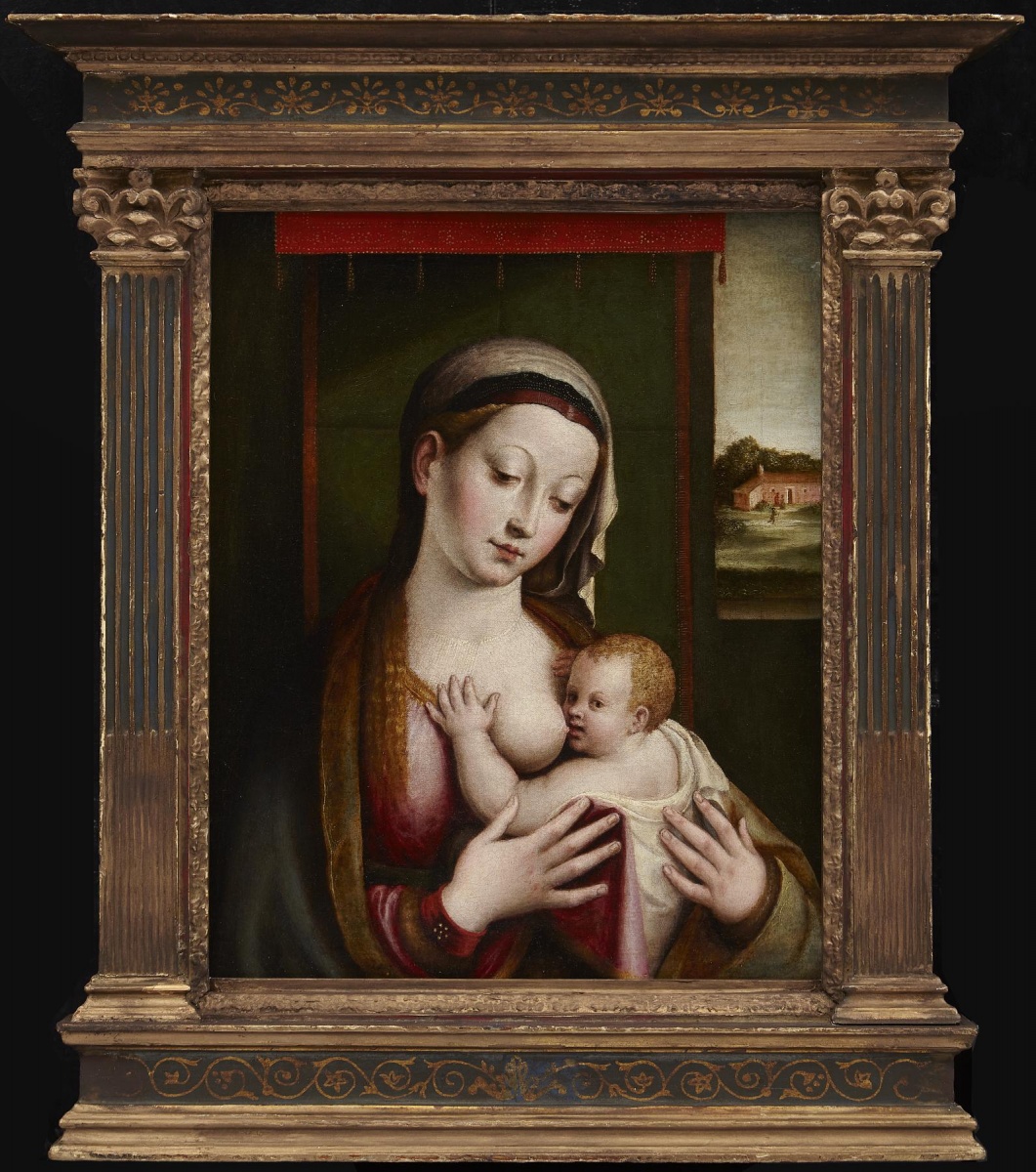 Coming from an artistic family, Longhi trained under her father, Luca (1507–1580), who was an esteemed painter in Ravenna, Italy. She grew to become one of the few women of the Italian Renaissance who maintained successful careers as professional artists. She was best known for her religious paintings, particularly of women saints. This acquisition marks the first purchase by the AGO Department of European Art of an artwork by a woman artist. Longhi’s painting, alongside two other gifted paintings by women artists (Mary Ann Alabaster (1805–1879) and Rosa Bonheur (1822–1899)), extends the AGO’s holdings of European Art by female artists three centuries deeper into the past.

“The Virgin and Child imagery corresponds to other devotional paintings, such as Bernaert van Orley’s Rest on the Flight into Egypt, but is an especially interesting counterpart to our other Italian Renaissance works, such as Jacopo Tintoretto’s Christ Washing His Disciples’ Feet,” says Levine, “Our Tintoretto, painted in the Renaissance cultural centre Venice, tells one common story of a male artist with a large studio working for institutional and public patrons. By contrast, this new acquisition by a woman artist from a smaller artistic community, crafting images for domestic and private female patronage, broadens and nuances our presentation of the Renaissance.” 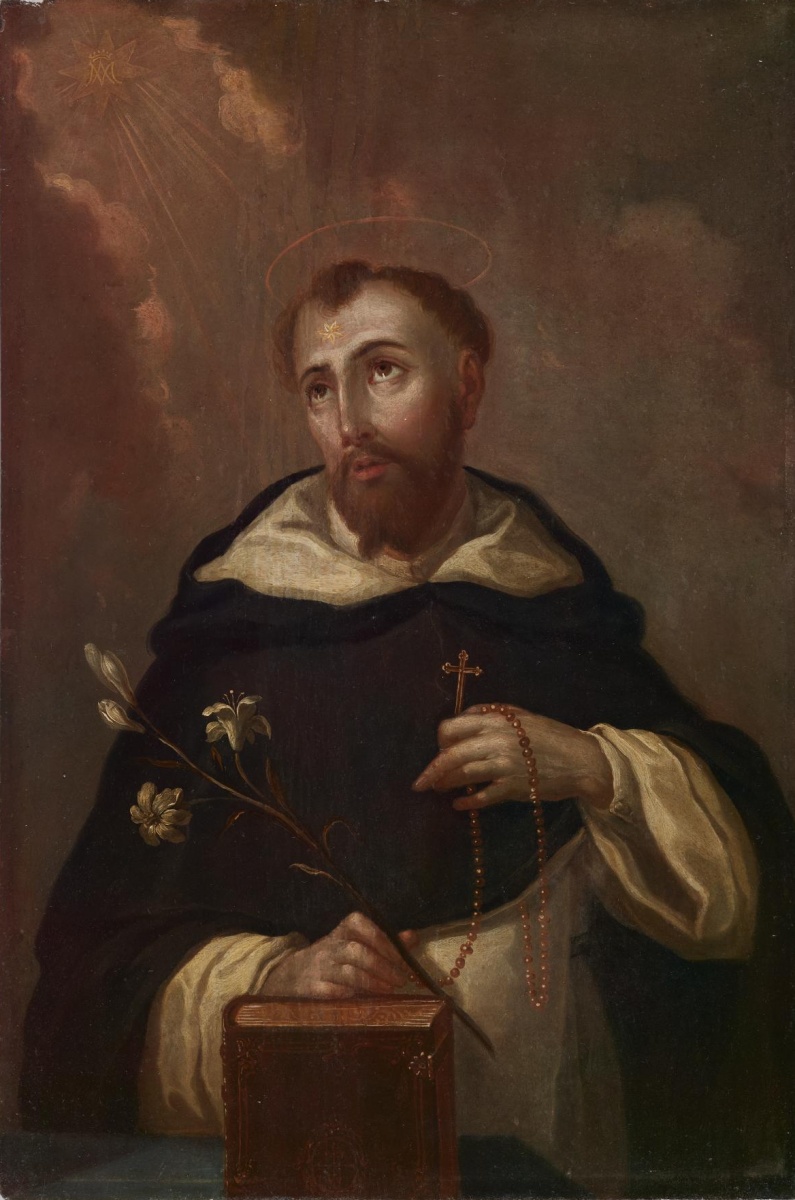 Another recent acquisition to the European gallery is José Campeche’s depiction of Saint Dominic of Guzmán, the medieval saint who invented the rosary and founded the order of monks called the Black Friars. Our new painting references both of these facts: Saint Dominic is presented wearing the white and black robe of his order, and holds a rosary in his hands. The rosary is a Christian practice centered around devotion to the Virgin Mary, and Campeche makes reference to the Virgin with the spray of delicate white Madonna lilies in the saint’s right hand, and the sun at the top left of the painting, marked with three Ms—a symbol for Mary.

Of Afro-Caribbean ancestry, Campeche was the most sought-after painter from Puerto Rico in the 18th century. His famous portraits were commissioned by Puerto Rico’s elite and his extant religious paintings hint at his important patronage by the island’s Catholic institutions.

“As a descendant of the African diaspora, the same forces of colonialism that brought Campeche’s forbearers to Puerto Rico also introduced Catholicism to the region,” says Levine.  “Our new acquisition allows us to think in brand new ways about the history of European art and its reception around the world.”

Highlights of the European Collection is on view now until February 2022. Be the first to know about upcoming exhibitions, acquisitions and events by signing up to AGOinsider.