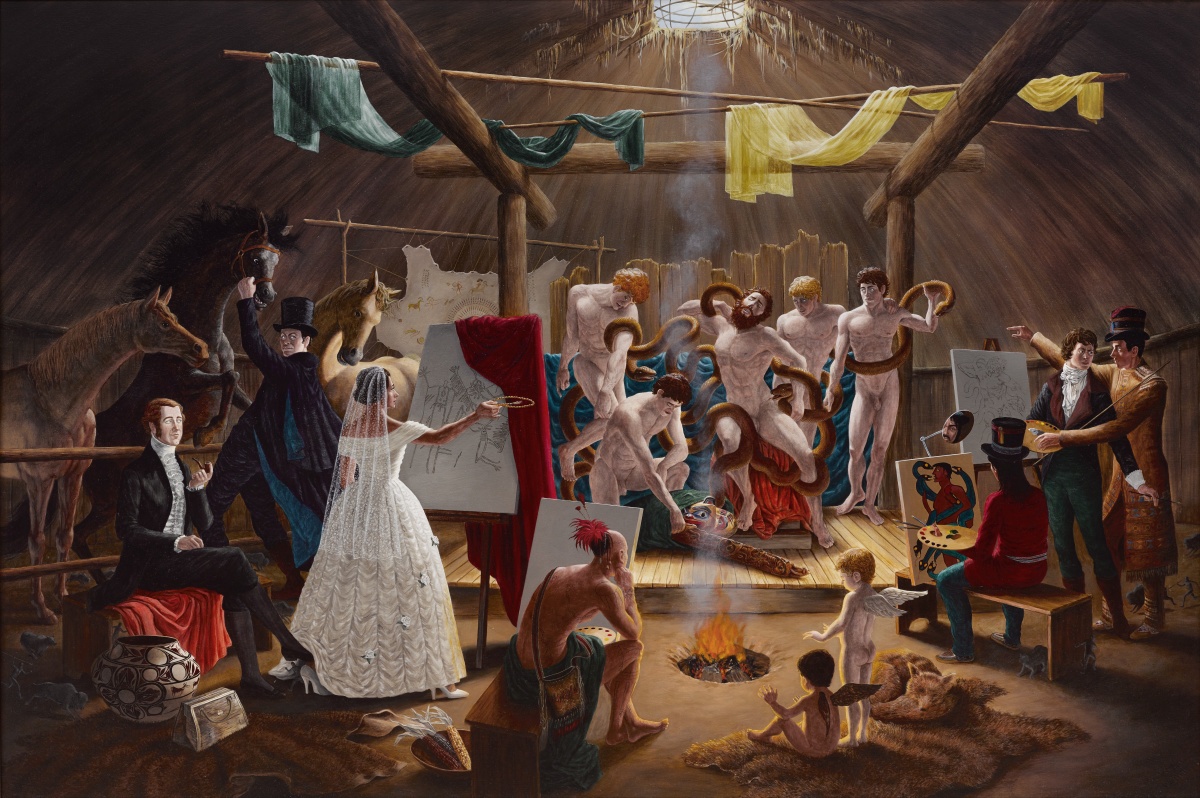 In our blog series, A Closer Look, we explore some amazing works in the AGO Collection, like our feature on a Camille Pissarro painting. This edition, we’re turning our attention to the fantastic details of artist Kent Monkman’s powerful, large-scale painting The Academy, which includes references to works you may recognize from the AGO Collection – but not in the way you’re used to seeing them.

Toronto-based Monkman is an internationally-renowned Cree artist whose fascinating works explore themes of colonization, sexuality, loss, resilience and the complexities of the Indigenous experience. Known for recasting popular figures in art history with Indigenous people, Monkman’s works often highlight how Indigenous people were traditionally misrepresented and objectified in art history.

We see that in The Academy, where Monkman reframes historical works of art including Nicolas-André Monsiaux’s Zeuxis choisissant des modèles, which depicts Zeuxis as an artist in front of a blank canvas and several nude women models. Zeuxis amalgamated the models best attributes – using them for his painting of Helen of Troy. (The painting is on view on Level 1 in the Richard Barry Fudger Memorial Gallery, Gallery 125.)

The painting also reinterprets the ancient sculpture Laocoön and His Sons -- which depicts three men struggling as they’re being attacked by serpents. In Monkman’s version, five idealized European men are at the centre of the painting – cast as objects in the Indigenous artist’s creations.

On the left is a woman who appears to be Harriet Boulton Smith. Her husband William Henry Boulton is behind her, playfully kicking up her skirt. (Boulton Smith donated her art collection and historic Grange estate to, what’s now known, as the AGO.) Look closely and you’ll find you’re actually seeing Monkman’s glamorous gender fluid alter-ego Miss Chief Eagle Testickle – a recurring character in his work. She’s creating a drawing while waving sweet grass and wearing a gown similar to the one Harriet wears in her portrait now on view on Level 2 of the AGO.

On the far right, above the depiction of Anishinaabe artist Norval Morrisseau working on his painting Self Portrait Devoured by Demons, is Monkman again, but this time as himself – making The Academy a double portrait of him in male and female roles. Monkman stands behind the easel wearing a traditional Cree Coat, caught up in an interaction with French Neoclassical painter, Jacques-Louis David. (Morriseau’s work can be found in the J. S. McLean Centre for Indigenous & Canadian art in the AGO.)

We love that Monkman’s painting includes so many interesting references. See for yourself by visiting this painting on Level 2 in the J. S. McLean Centre for Indigenous & Canadian Art.

Interested in learning more about Kent Monkman? On Wednesday, November 14 at 7 p.m. the Ontario Heritage Trust hosts Decolonizing Art History, an evening with the artist at the Elgin and Winter Garden Theatre. Monkman will discuss his travelling exhibition, Shame and Prejudice and how his art and curatorial practice decolonize art history in museum settings. For more information and to book tickets, click here.