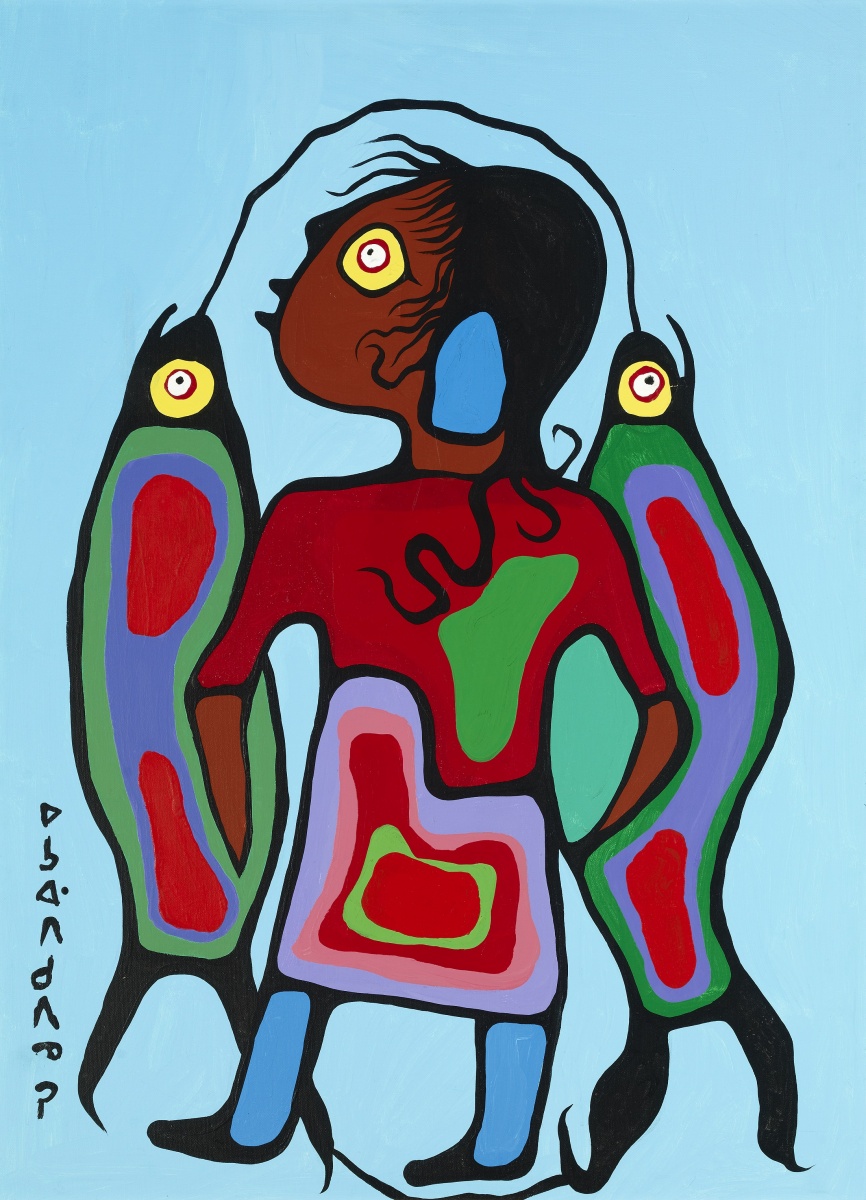 In 2020, Canadian artists represent a full spectrum of communities and voices, but throughout most of our history, this diversity has not always been reflected at major art institutions. The tide is beginning to change drastically, and that is largely due to artists who have laid the groundwork for progress. Considered by many to be the Mishomis (Grandfather in Ojibway) of contemporary Indigenous art in Canada, Norval Morrisseau has left a monumental legacy.

His surreal, vibrant depictions of Anishinaabe stories, history and cultural traditions have provided inspiration for generations of Indigenous artists. A number of his seminal works, including Boy With Fish (pictured above) and Man Changing into Thunderbird (pictured below), can be found on view as part of the AGO Collection.

Born in 1932 on Bingwi Neyaashi Anishinaabek First Nation in Northwestern Ontario, Norval Morrisseau spent his early childhood learning sacred cultural traditions from his grandfather, Moses Potan Nanakonagos, a shaman trained within the Midewiwin spiritual tradition. Nanakonogos teachings introduced Morrisseau to much of what influenced his art, including  birchbark scrolls, sacred sites, rock paintings, stories and ceremonies. At age six, he was forced by the Canadian government to attend a residential school where he endured multiple abuses. After surviving four years at the school, he returned home and was drawing regularly, spending much of his adolescent years artmaking. At 19 years old, he became critically ill and, during a healing ceremony conducted by his family, was given a new name: Miskwaabik Animiiki (Copper Thunderbird). Invigorated by his new identity, he painted prolifically throughout the 1950s and early '60s, mostly utilizing culturally traditional surfaces like birch bark and leather. After relocating to Beardmore, Ontario, Morrisseau’s work garnered local fame and was instrumental in his introduction to the art scene.

His style and technique evolved as he continued to meet other artists and purveyors of art. Canadian artist Selwyn Dewdney championed his early work, and eventually edited Morrisseau’s first book, Legends of My People: The Great Ojibway. A close relationship with Canadian painter Susan Ross landed Morrisseau a meeting with Toronto gallery owner Jack Pollock. It was at Pollock Gallery in Toronto that Morrisseau’s debut exhibition was held in 1962. Every painting was sold on opening day, making him an instant national success. This marked the first time in Canadian history that an Indigenous artist had shown work at a major contemporary art gallery.

As his visibility grew with more successful exhibitions domestically and abroad, Morrisseau began advocating for other emerging artists. He was an original member of Professional Native Artists Incorporation, founded by Daphne Odjig in 1971 as a means of promotion and support for First Nations artists in Canada. The combination of his influential style of painting and important advocacy work turned Morrisseau into a living legend of Canadian art. In 1978, he was awarded the prestigious Order of Canada for his important contributions. The AGO also helped solidify his legacy, holding the exhibition Norval Morrisseau and the Emergence of the Image Makers in 1984, curated by Tom Hill and Elizabeth McLuhan. It placed Morrisseau’s work beside a number of his contemporaries, showing the conversation and connection between their styles. They included Daphne Odjig, Carl Ray, Joshim Kakegamic, Roy Thomas and Blake Debassige.

Contemporary Indigenous art has often been overly mythologized and treated as artifact or souvenir  rather than high art. Norval Morrisseau refused to be bound by the ignorance of others, creating work that boldly challenged the art world’s understanding of his community. Sadly, he passed away due to complications with Parkinson’s disease in 2007, but his legacy will live on through the thousands of artists he paved the way for.