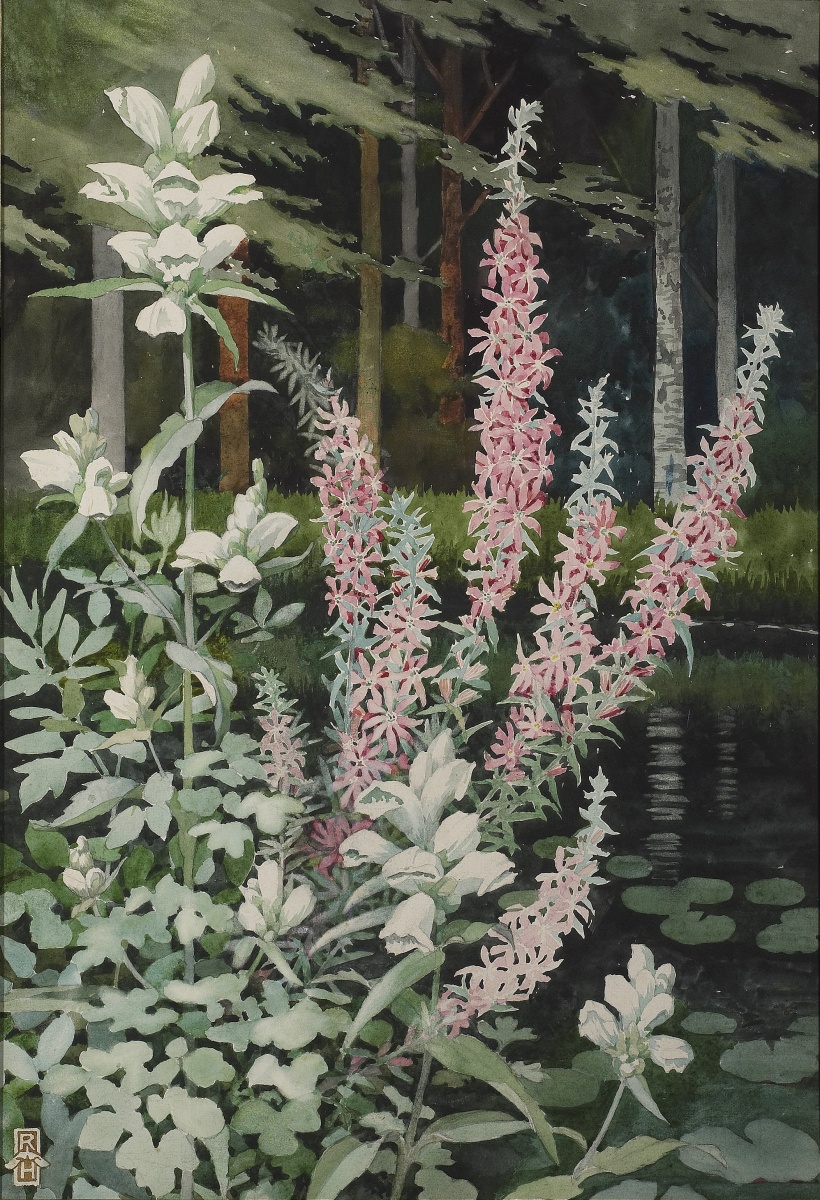 At the eastern edge of Guild Park in Scarborough, Ontario, just off the path before the faux Grecian columns and carved friezes, there stands a quiet stone monument into which is carved the determined face of Canadian watercolourist Robert Holmes. He was one of Canada’s great floral painters, and it is a fitting tribute for an artist whose greatest joys were found in nature.

Born in Cannington, Ontario, in 1861, Holmes abandoned a career in medicine to train at the Royal Academy of Art in London, England. He returned to Toronto and spent the next forty years teaching, first at Upper Canada College alongside the humourist Stephen Leacock and then at the Ontario College of Art (now OCADU). It’s said his interest in painting wildflowers stemmed from a desire to interest students in their natural surroundings.

In 1916, J.M. Dent & Sons Limited of London, England, published Rambles with a Canadian Naturalist, a collection of nature essays by Globe newspaper columnist Samuel T. Wood. Illustrated by Robert Holmes, each chapter features a motif designed by his students.

During his lifetime, Holmes’s work was exhibited in museums across North America. Writing in Saturday Night magazine in 1928, critic Gertrude Pringle remarked that "Mr. Holmes's flowers have the appearance of being caught unawares in the woods. This is indeed the case. He knows all the wooded nooks in and around Toronto for many miles. Between the painter and the flowers, there is a real affinity…..While at first Mr. Holmes painted in oils, he now uses watercolour entirely, finding it more satisfactory in expressing the fragility of flowers and few have attained such command of this tricky, difficult medium as he."

Holmes died in May of 1930, the oldest faculty member at the Ontario College of Art. In his obituary, which was carried in The New York Times, it was noted that he died suddenly after having delivered a humorous address at the College, in which he described the graduating class as the "wildflowers of which he knew so much."

The AGO is home to more than 30 of Robert Holmes’s watercolours, most completed during the summer terms when he escaped the classroom to explore the woods and wilds of Ontario. Join us as we take a ramble through the woods with one of Canada’s great artists.