May 7, 1920, was a sunny and mild Friday. Anyone wishing to visit the Art Gallery of Toronto (now the Art Gallery of Ontario) would have paid twenty-five cents to enter. Inside they would see an exhibition by locally known artists, eager to propel their art and vision to the forefront. One hundred years later, we look back at this lasting moment in Canadian art.

In 1920, the Gallery was very much in its infancy; only the year before it had changed its name from Art Museum to Art Gallery, and its exhibition space was limited to just three galleries, referred to by their shape – octagon, square and long.

Across these three galleries, 121 works were arranged. The exhibition was titled simply The Group of Seven. The artists at the heart of this exhibit were based in Toronto; many of them colleagues at the design firm Grip Ltd., all members of the Arts & Letters Club and frequent exhibitors at the Ontario Society of Artists. Some had been war artists and some taught at OCAD University. But this was a first – their first expression of their shared purpose, their first articulation of a common vision.

The exhibition was accompanied by a pamphlet, which could be purchased for ten cents. Elegantly designed, befitting a collective largely made up of commercial artists, the logo across the top was the creation of member Arthur Lismer.

Written by the Group’s de facto leader, Brantford, Ontario-born artist Lawren Harris, the double-sided pamphlet featured a lengthy foreword; it was both a vision statement and provocation in one, "The group of seven artists whose pictures are here exhibited have for several years held a like vision concerning Art in Canada," Harris wrote. “These images invite adverse criticism.” 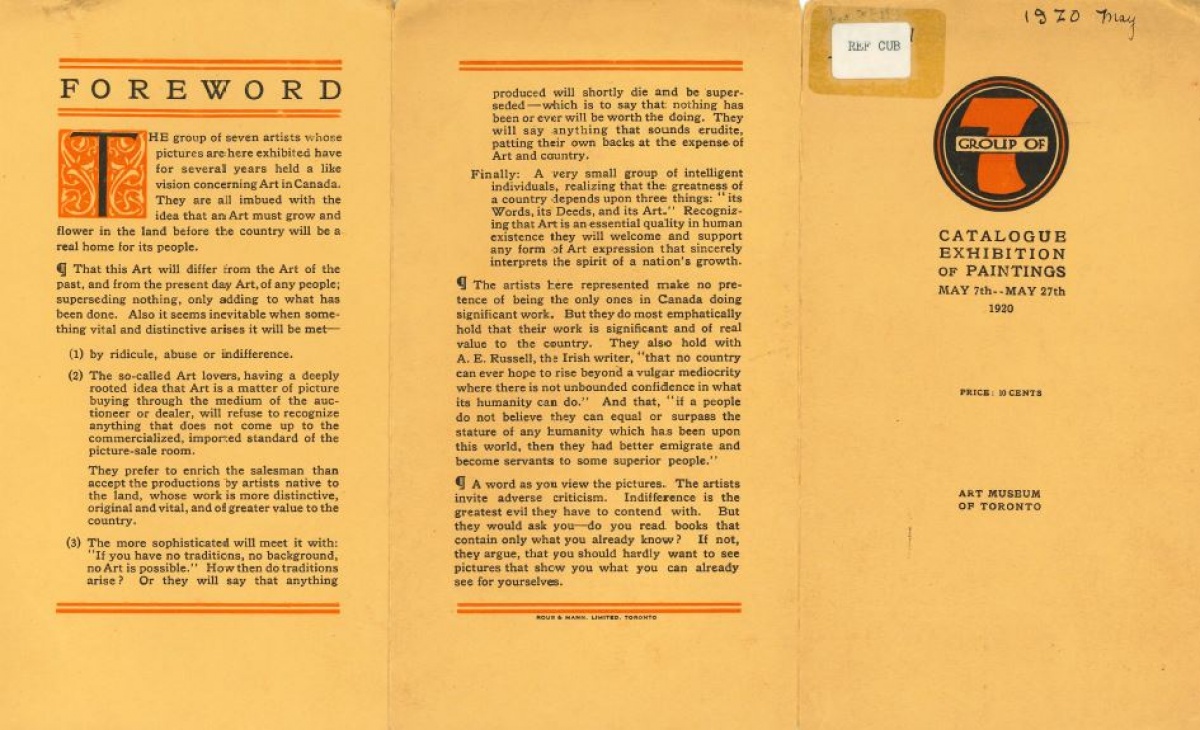 In addition to featuring select works by the original founding members of the Group, three Montreal artists were also included in that initial exhibition. At the invitation of A.Y. Jackson, who saw the Group’s aim as being national in scope, Montreal painters R.S. Hinton, R. Pilot and Albert Robinson were included. Although they themselves would not join the Group, they would serve as leading members of the Canadian Group of Painters.

Approximately 2,000 visitors would pass through the Gallery doors during the exhibition’s twenty-day run. And although the Group would sell very few works – two by Carmichael to a private buyer and three to the National Gallery of Canada: Night, Georgian Bay (Jackson), Fire-swept, Algoma (Johnston) and Shacks (Harris) – the response from critics was loud and varied.

“Are these new Canadian painters crazy?” asked TheCanadian Courier, while the Toronto Star could only concede that “these seven painters show some excellent work.”

Toronto artistic circles were not surprised – J.E.H. MacDonald’s The Tangled Garden was raising eyebrows since its debut in 1916 when Hector Charlesworth accused the artist of throwing "...his paint pots in the face of the public."

Nonetheless, they persisted, imagining in paint ancient lakes and woods, Arctic vistas and the magic of the northern lights. The Gallery remained one of their largest proponents, hosting eight exhibitions between1920 and 1931.

The Group would officially disband in 1933.

See more works from the AGO Collection, including Indigenous and Canadian art, through the AGO’s online Collection Search. Looking for more art news from the AGO and beyond? Stay tuned to the AGOinsider.