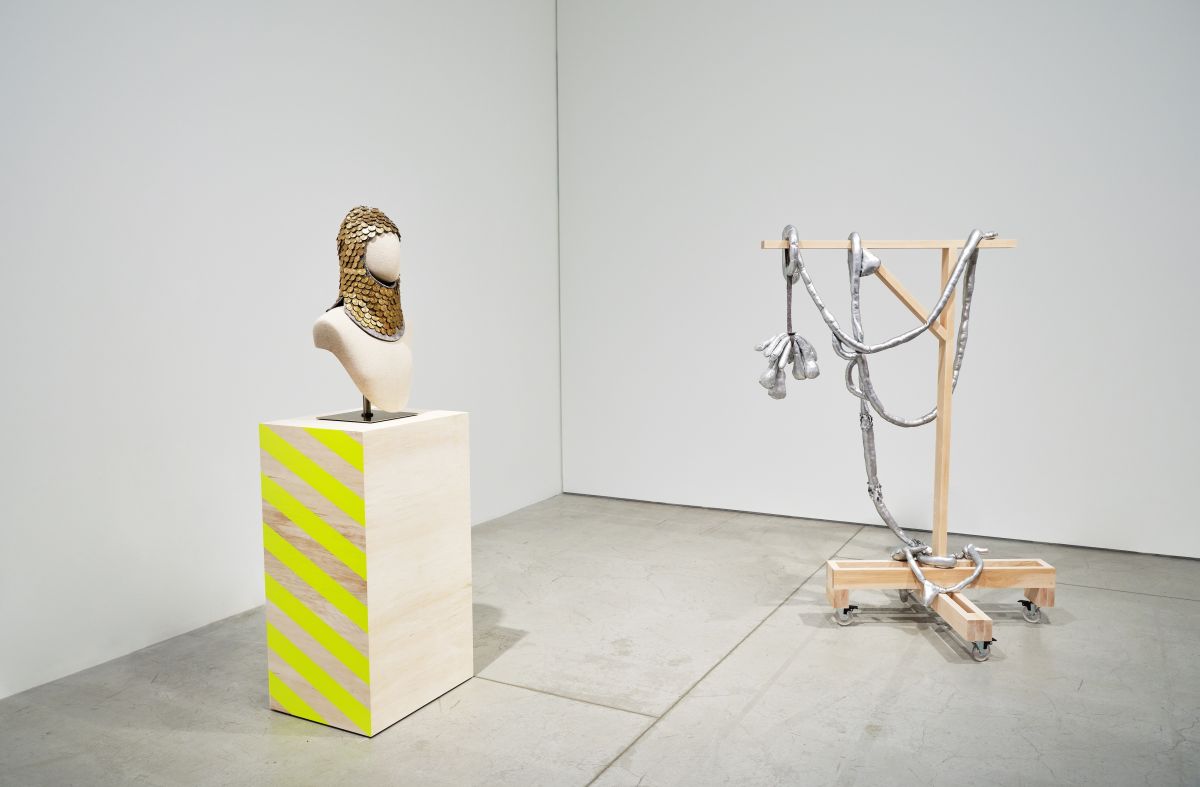 Last February, thanks to the generosity of the Canada Council’s 2021 York Wilson Endowment Award, the AGO welcomed to its Collection two recent works by celebrated, transdisciplinary Anishinaabe artist Maria Hupfield. Through her sculptural works, performances and film installations, the artist aims to make space for Indigenous histories and bodies, repurposing everyday materials and activating the works with her own body.

Currently on view on Level 4 of the Vivian & David Campbell Centre for Contemporary Art, alongside a work by Jana Sterbak, Hupfield’s Golden Dollar (Sacagawea) (2018) and The Silver-Tongued Taste of Progress (2018) are both sculptures and live performance props, designed to be activated by the artist’s touch.

Born in Parry Sound, Ontario, Hupfield is a member of the Wasauksing First Nation and is based in Toronto. "After living nearly a decade in Brooklyn, New York,” says Hupfield, “it feels like progress to bring two works home to the AGO that embody economic and symbolic international power by Native Women"

Golden Dollar (Sacagawea) is a bust adorned with a hood comprised of 500 American dollar coins, each stamped with the likeness of the 19th century Shoshone interpreter Sacagawea, referencing 500 years of occupied land and asserting Indigenous knowledge as foundational to American wealth. Portrayed in settler narratives as a helpful and benevolent guide to the American explorers Lewis and Clark on their travels across the American West between 1803-06, Sacagawea is recast in Hupfield’s sculpture as both warrior and protester, adorned in a hood of her own value, a kind of chainmail.

‘Silver tongue’ is a slang term for settlers who negotiated treaties with Indigenous peoples only to break them, and Hupfield gives shape to these disingenuous characters and the destruction they wrought in the name of progress in The Silver-Tongued Taste of Progress (2018).  Featuring silver lamé and industrial felt ropes draped over a wooden structure on wheels − itself a substitute for the Indigenous body − Hupfield continues gives form to actions and words.

Be sure to subscribe to the AGO Insider for even more exciting contemporary art news.