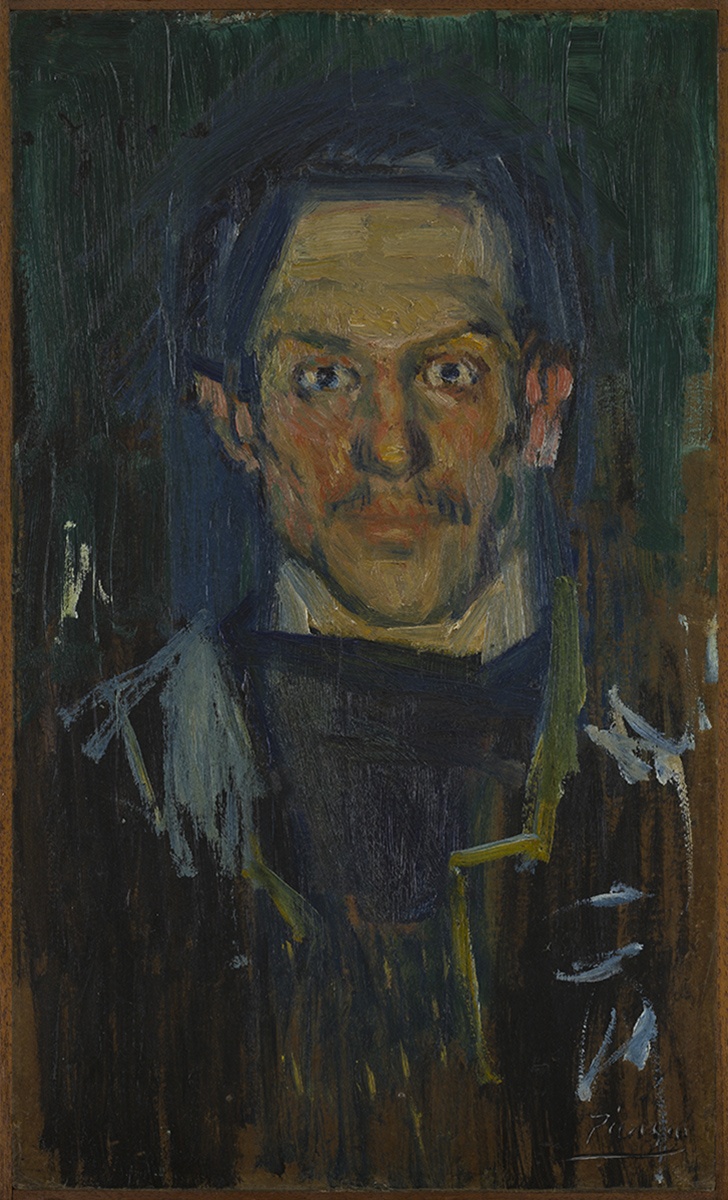 From age 19 to 23, a young Pablo Picasso travelled back and forth between Paris and Barcelona, struggling to launch his career as an artist. His signature Blue Period style, which comes to life in the new exhibition, Picasso: Painting the Blue Period, highlights just how important these two cities were to his artistic development. Drawing on recent technical studies of three important works – one made in Paris and two in Barcelona – curators Kenneth Brummel and Dr. Susan Behrends Frank were able to directly attribute creative decisions to artworks and artists he encountered in each city.

Here we present a highly abbreviated account of Picasso’s travels during this incredible time.

On January 1,  a 19-year-old Picasso arrives in Málaga, Spain, with his artist friend Carles Casagemas. But he offends his uncle and moves to Madrid at the end of the month. There he begin a new art journal, Arte Joven – with himself as its director of art and head illustrator. On February 17, Casagemas commits suicide in Paris, a loss that has a major effect on the young Picasso.

After a brief pit stop in Barcelona, Picasso heads to Paris that summer. Living and working out of the same Montmartre studio that had previously been home to Casagemas, Picasso creates new works for an exhibition being organized by famous Parisian art dealer Ambroise Vollard. Twelve of these works are on display in the exhibition.

Later that summer, Picasso visits Paris’s Saint-Lazare hospital-prison for the first time and begins sketching female prisoners. His interest in these inmates inspires him to create various paintings, including Melancholy Woman (Paris, 1901–1902; Detroit Institute of Arts) and three others on view in the exhibition.

In January, Picasso returns to the family home in Barcelona. The city is in the midst of social unrest, as a hundred thousand striking workers crowd the streets demanding living wages as the government declares martial law.

Sharing a studio with Catalan artists Àngel Fernández de Soto and Josep Rocarol, he’s inspired to paint poor, marginalized women. Five paintings from this moment, including Two Women at a Bar (Barcelona, 1902; Hiroshima Museum of Art), are on view in the exhibition. That spring, he also creates his first sculptural work, also on display.

By autumn, the 21-year-old was being mentioned in Paris art journals but continuing to struggle financially. On October 19, with a train ticket purchased by his uncle, Picasso returns to Paris. His exemption from the Spanish military draft was similarly paid for by his uncle.

Towards the end of the year, Picasso’s work was included in a Paris exhibition at Galerie Berthe Weill, marking the first time any of his Blue Period paintings went on view publicly. Crouching Beggarwoman (1902), now part of the AGO Collection, was most probably exhibited in that show.

Struggling financially, in early January Picasso sells his pastel Mother and Children by the Sea (Barcelona, 1902; Private Collection, Courtesy of Richard Gray Gallery), and with this money he travels back to Barcelona. Upon his return, he paints The Soup (1903), also now in the AGO Collection. Around this time, Picasso begins incorporating male figures in his Blue Period paintings.

Early in the year, Picasso visited a morgue at the Hospital of the Holy Cross. Moved by the sight of a woman who died during a gynecological operation, he paints The Dead Woman (Barcelona, 1903; Museu Picasso, Barcelona) shortly thereafter.

On April 12, Picasso leaves Barcelona permanently and moves to Paris. Together with his artist friend, Sebastià Junyer-Vidal, he sets up residence in the studio of sculptor and art collector Paco Durrio.

That summer, Picasso meets and becomes romantically involved with the French artist and model Fernande Olivier. She will eventually go on to become the subject of more than 60 artworks. Four major works depicting Olivier are in the exhibition.

In September, Picasso finishes his first major etching The Frugal Repast (Paris, 1904; The Museum of Modern Art, New York). Picasso sent and dedicated the impression on display in our exhibition to his friend Sebastian Junyent with the hope that Junyent would find buyers for the print in Barcelona. Olivier, in her memoir Loving Picasso described The Frugal Repast as “showing an emaciated man and woman seated at a table in a wine shop, who convey an intense feeling of misery and alcoholism with terrifying realism.”

For the 23-year-old Picasso, the end of 1904 marked a new artistic beginning and the early stages of his Rose Period, when he began painting with predominantly terracotta pigments. He would go on to lead a long and legendary career as one of the most well-known painters in history, creating art until his death in 1973.

Picasso: Painting the Blue Period is co-organized by the Art Gallery of Ontario, Toronto, and The Phillips Collection, Washington, DC, with the exceptional support of the Musée National Picasso-Paris.

Don’t miss Picasso: Painting the Blue Period, on view now. For more information or to book your tickets, visit AGO.ca.