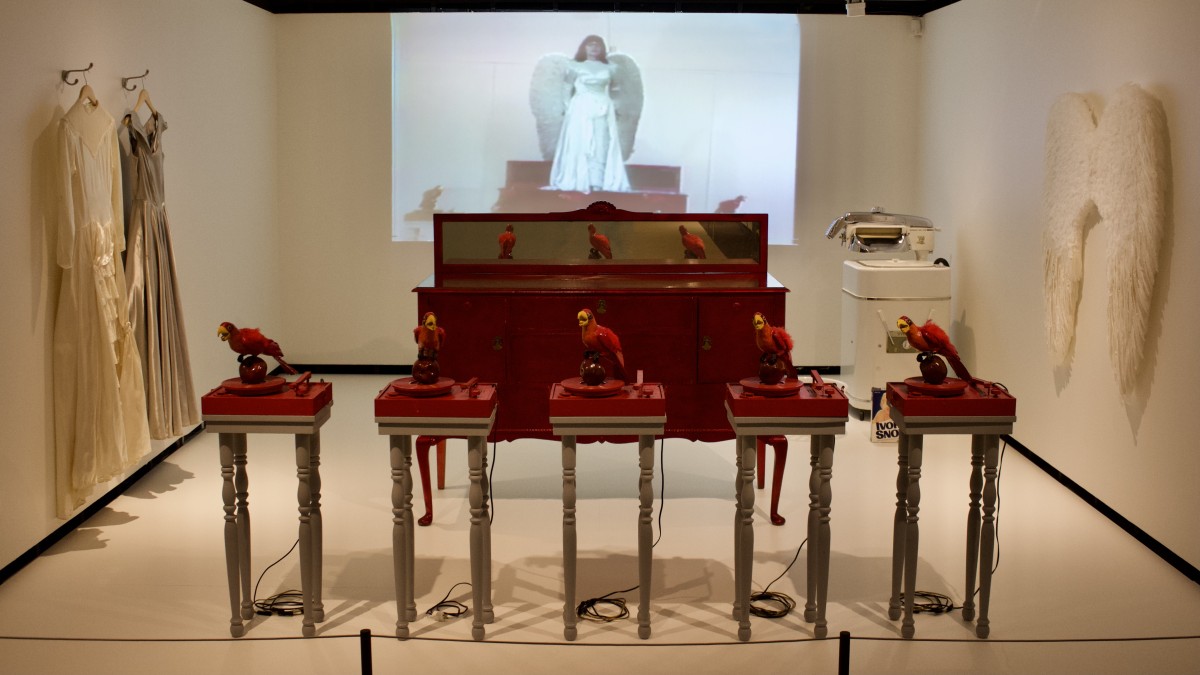 Widely acknowledged as the first performance artist in Canada, Falk, now 94, established herself through the 1960s and ‘70s as one of Canada’s most visionary and experimental artists. A landmark in Canadian art, Red Angel “is one of Falk’s most visually arresting performance pieces,” says Georgiana Uhlyarik, AGO, Fredrik S. Eaton Curator, Canadian Art. “It speaks to all the central issues in her artistic practice: objects and memories of personal significance, music, wit and ordinary activities, ceramic fruits, found objects, repetition and repurposing of components from previous works, dreams, and the juxtaposition of what at first appear to be disjointed elements.”

The work, which was acquired by the AGO in 2017, was recently revived by AGO conservators for a survey exhibition at the McMichael Canadian Art Collection.

“We always start with the artist's vision,” said Sherry Phillips, the AGO’s former conservator of contemporary art, who led the restoration efforts. “When the AGO acquired the work in 2017, Georgiana and I had lengthy discussions with Gathie in her living room about how the piece was to live and look. There were diagrams made over tea and conversations recorded. Gathie went on to film a version of the performance piece in 1977— which we knew the McMichael curators would be showing as part of their exhibition — so we had the additional challenge of having to match that existing visual record.”

For Phillips and the AGO’s conservation team, the challenge was how to replace and restore props that had been since discarded or deteriorated. Time-based media conservator Shu-Wen Lin was instrumental in establishing installation and display guidelines for the projection component of the installation piece. The artist-made and worn angel wings were too fragile to travel so new wings were recreated entirely by AGO Conservation Technician Maureen Del Degan. She manufactured new ones out of turkey, duck and chicken feathers.

The artist-painted parrots and ceramic apples were in good condition but the dresses, both original to the first performance, required repairs and pressing to stabilize and return them to presentable condition. Custom padded hangers and inserts enable the dresses to be installed securely, according to Gathie’s request that they “not hang limply, but have a bit of shape”. The record players couldn’t be re-wired to current electrical safety standards in time for the loan.

The most unique challenge was replacing the vintage wringer washer, a key set piece. “Gathie had discarded the original machine, so it took months of hunting on Kijiji and eBay to find a suitable replacement. And even then, what we found required some aesthetic intervention. So, Georgiana rented a vehicle and dropped off the machine at my home. I spent part of the pandemic in my basement, removing spots of corrosion and restoring it. I was lucky to find a suitable Ivory Snow soap flakes box on eBay. Those vintage boxes are now a collector's item.”

On view through January 8, 2023 at the McMichael Canadian Art Collection, Gathie Falk: Revelations summarizes the artist's extraordinary career. “We were honoured that the AGO allowed us to give the props from Red Angel their first viewing after their refurbishment,” says Chief Curator Sarah Milroy. “Thanks to the diligent conservation efforts of the AGO, we have been able to show Gathie’s extraordinary contribution in all its glory."