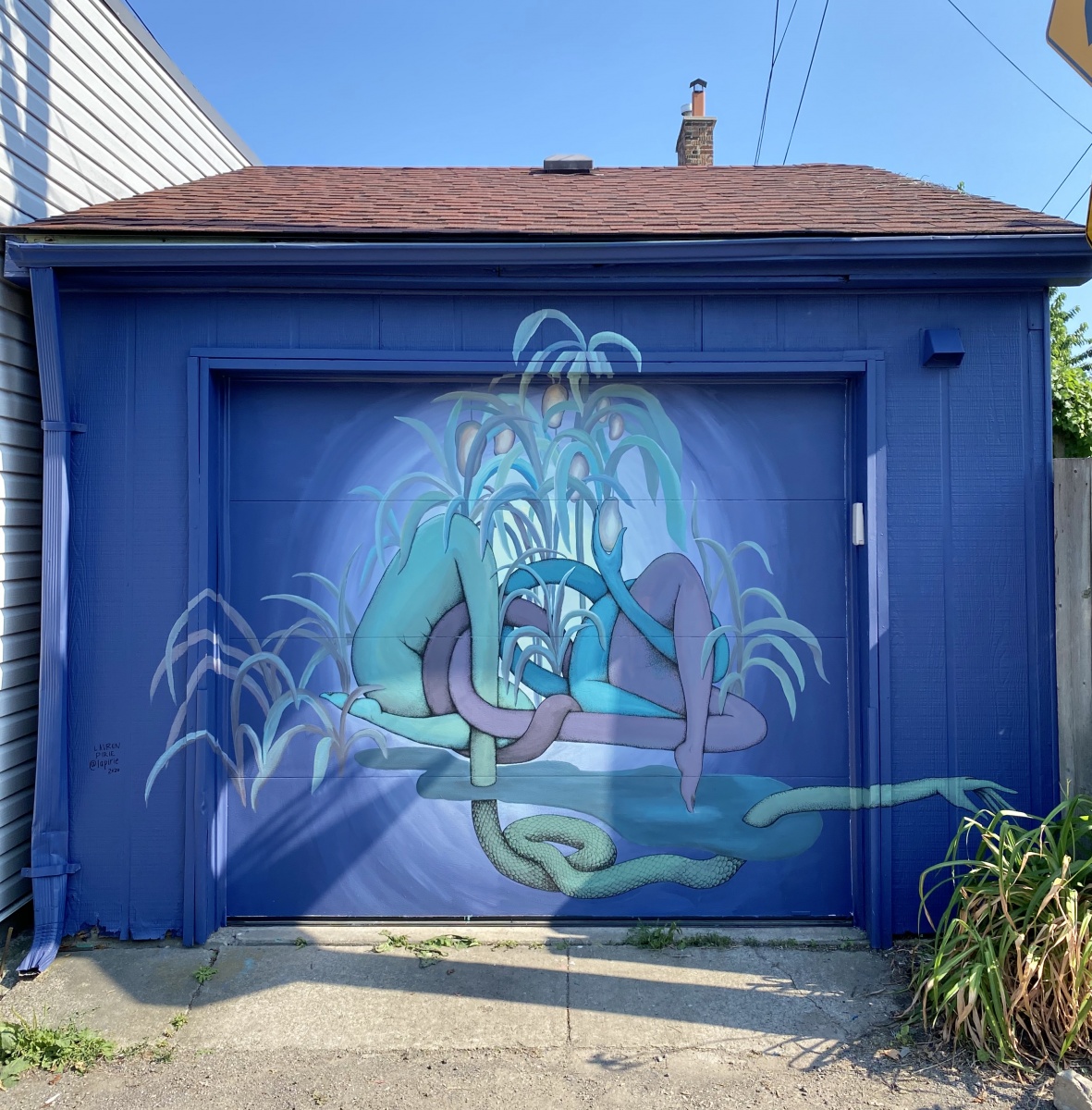 January 1, 2021, marks the beginning of Toronto’s Year of Public Art. In anticipation, we’ve been introducing you to some of the city’s notable outdoor artwork including murals, graffiti and public installations—and the artists behind them.

This week we spoke with Toronto artist Lauren Pirie. Her unique murals emote strong feelings of interconnectedness and usually feature the flowing, sensual limbs of human-serpent hybrid beings. Pirie’s mural work is part of a robust practice that includes everything from fine drawings to large-scale sculptural installations.

On the heels of her recently completed piece at 1417 Dundas West in Toronto, we connected with Pirie to chat about serpents, divine connections and navigating 2020.

AGOinsider: Your work features figures with hybrid anatomies that appear to be both human and serpent. What is the importance of serpentine symbolism, and why is this a recurring theme for you?

Pirie: Serpents have shown up and merged with human bodies in my work for a long time. It came from a very intuitive place to begin with; there’s a strong sense of physicality in my work and an inherent sensuality in the form of a serpent and the suggestion of the way it moves. Snakes might feel so far from being human, but they meld with and intertwine with human forms in my work —there’s a desire for human connection and physical touch intertwining with a desire for a physical and spiritual connection to the Earth. But snakes can conjure desire, repulsion and fear at the same time. Snakes are often associated with evil in Christian/ Western culture, but outside of those cultures, they’re connected to the Earth Mother, creative energy, water, the underworld, the divine feminine. I’m really interested in the range and the dissonance of those interpretations. I’m always trying to consider what we understand viscerally, inherently, and what we learn from experience—our own and by listening to the stories of others—versus what’s instilled in us by way of the dominant culture.

AGOinsider: In many of your pieces there seems to be a dialogue between what is submerged in water and what is exposed. How would you describe this conversation?

Pirie: There is for sure. Sometimes it's a more obvious representation of a body of water and sometimes the bodies themselves are what seem to be made of liquid, or have penetrable surfaces.  There is a very... maybe, obvious metaphor here: these anthropomorphous beings are often dipping into dark waters in order to writhe around and come to the surface again before moving forward; their progress involves confronting what lies below. But it’s also very literal. Water is healing for me. I yearn to be in it. We are made of it. We can’t live without it. And it emphasizes, again, the connection between the physical and emotional, and the natural and the supernatural.

AGOinsider: If you could paint a mural on any surface in the world, where would it be and why?

Pirie: I had a dream once that took place in this greenhouse space — a giant glassed-in terrace full of tropical plants on the side of a beautiful old plaster building. I’ve forever wanted to build some kind of artist residency. The vision has evolved over the years—I always thought it would be beside the ocean, but the space in this dream was somewhere in Ontario. I hadn’t thought about the dream in a while (thank you for asking this question, wow) but at the time I imagined a mural on that plaster wall. Aside from murals, my public art practice involves large-scale soft sculpture and lighting-based installations, and a lot of collaborative projects. I also curate for art-related events. So, to answer your question: I would paint a mural on this mystery wall of this fantasy greenhouse, attached to a space meant to house artists for residencies and facilitate collaborative projects. I’d love for the wall piece to be part of a larger installation project. I have no idea where in the world it is yet, but I do have a very good idea of some of the other artists I’d ask to join me.

AGOinsider: You’ve noted before that your work signifies interconnectedness (between humans as well as environmentally). Considering the often divisive challenges of 2020, what message do you hope to convey to the public through your murals?

Pirie: Yes, I think a lot about our inherent interconnectedness, between each other and to the more-than-human world, and also about how much we yearn for those connections. I hope that people can feel a sense of intimacy between all of these elements in the work, while also noticing the intricacies, the nuance, the ambiguity. I’m really interested in queer ecology—many of us have been taught to view life in binaries, but things are rarely so distinct or unambiguous in nature and in life —which, of course, are not separate and which we are not separate from. I hope that especially in the middle of the city, this work can be a reminder of that. I think a lot of us feel very confused right now — we live in a system that encourages competition and rugged individualism but so many of us crave community support, collaboration, and intimacy. It’s hard to show up for this properly without acknowledging our own shit first. I think a lot about how confronting our individual and collective shadows can move us toward healing and growth, but that this process is not linear, it’s winding and complex and goes on and on, but how beautiful and unknown the possibilities are if we commit to it.