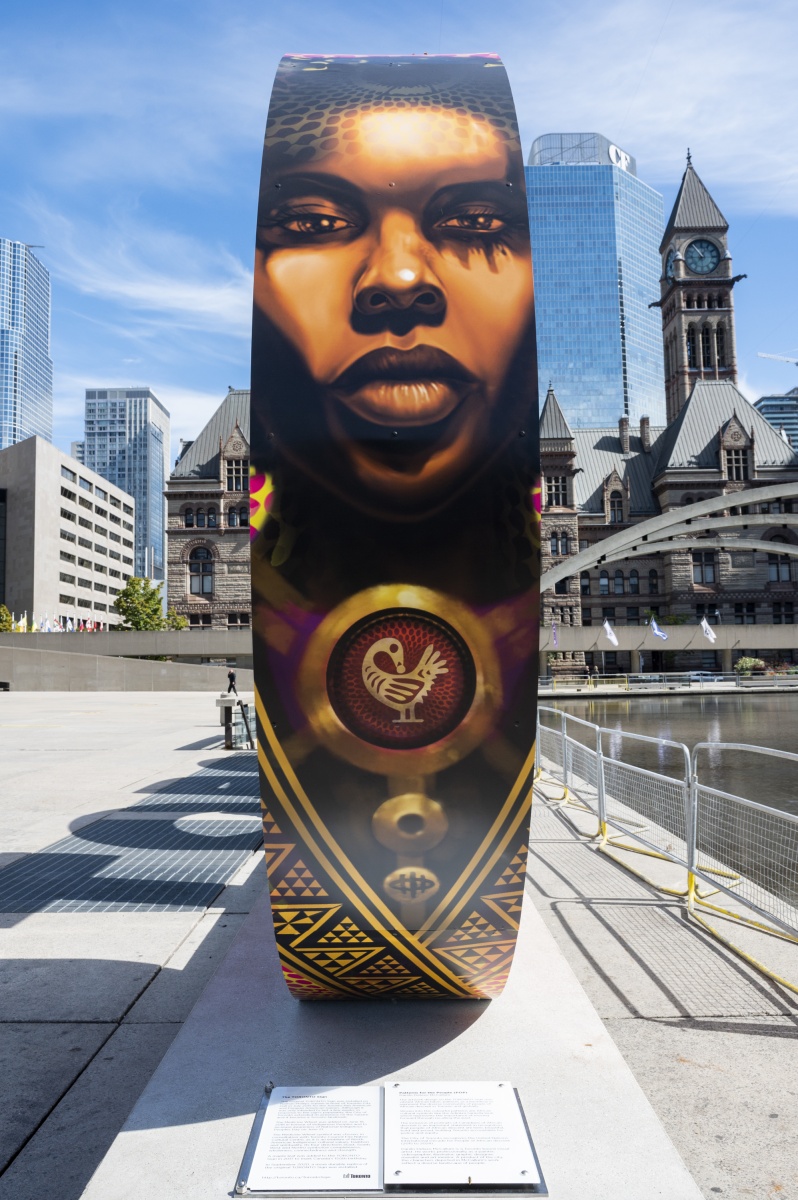 The City of Toronto has deemed 2021 the Year of Public Art, and what better way to prepare than by overhauling the iconic Nathan Phillips Square Toronto sign? Originally constructed for the Toronto 2015 Pan-Am Games, the sign was never expected to become such a fan favourite, and wasn’t built for long-term durability. This new and improved sign will last years, and features a vinyl wrap that will be re-designed annually by Canadian artists.

The inaugural wrap commemorates the International Decade for People of African Descent, as declared by the United Nations, and was designed by Toronto artist Danilo Deluxo. The eye-catching magenta and gold design is complete with patterns inspired by African fabric, along with vivid portraits of Black Canadians and traditional West African Adinkra symbols.

Deluxo’s work was chosen by a selection jury, culminating a city-wide open call for design proposals coordinated by the City of Toronto’s Confronting Anti-Black Racism unit. On September 18, he was joined by Mayor John Tory for the official unveiling of the new sign design.

We recently connected with Deluxo to find out more about the inspiration and intention behind his winning design, Patterns of the People.

AGOinsider: What was your approach to the design? And what was the submission process like?

Deluxo: My creative approach centred around three main themes. The first was honouring and celebrating the diversity within our Black community and the multiplicities of our identity. The second was to create an unapologetic offering that also represented  “the 6ix” as a global city. And third was to create a dynamic design with numerous experiences depending on the viewer’s vantage point.

I reflected on memories from my childhood growing up as a Torontonian in a proud Jamaican household. My mother instilled an importance in our heritage. I saw these African fabric patterns, unique musical instruments and so on in our home as well as when I’d visit aunties and uncles. All of this enriched me with a sense of pride in our culture and lineage.

Drawing from those experiences, I chose to explore African fabric patterns (African wax prints/ textiles) as the central theme and symbol to represent us as People of African Descent.

This initiative by the City was to commemorate the International Decade of People of African Descent (IDPAD). This was also an initiative working with the Confronting Anti-Black Racism (CABR) unit at the City. In late 2019 there was an official open call, specifically for Black professional artists and designers, to apply for the design of a new Toronto sign wrap. So I submitted a proposal with original artwork, there was a jury selection process, and my proposal was chosen. And as a Torontonian, it’s a huge honour to represent us and our city.

AGOinsider: Patterns of the People is rich with symbolism, such as Adinkra symbols. Could you elaborate on the meaning of some of these symbols, and explain why you included them?

Deluxo: I chose to break from conventions. From my research of wax prints, I often found many Adinkra symbols weren’t embedded directly into the patterns. However, for this design that’s exactly what I wanted to explore, to tell stories and weave messages inside in a sort of Afro-futurist cryptography. For example, on the mighty Medicine Wheel the symbols for strategy, faith and the Black fist appear together.

Meaning: We must keep hope and faith, but must also employ strategy in our struggle for justice and equity. And we will find intelligent ways of holding our city accountable in the fight against anti-Black racism. Here are some other symbols I used: The Sankofa Bird, Strength (Dwennimmen), Strategy/ Intelligence (Dame-Dame), Faith in a Higher Power (Gye Nyame), the Black Power Fists, the Graf Aerosol Cap, and the Talking Drum (Djembe Drum).

AGOinsider: There are some beautiful portraits in the piece. Are these actual people? If so, who are they, and why did you choose to include them?

Deluxo: Many Torontonian creatives, activists and community peoples were in my mind’s eye during the creation process. People who have done important work for our community and contributed to the fabric of this city. Individuals who continue to influence me today. People like Ian Kamau, M. NourbeSe Philips, Lillian Allen, Debbie Douglas, Aina-Nia, Quentin VerCetty, Yung Yemi, Sandra Brewster, Javid Jah, XYZ Collective, Alexis Eke, Esmaa Mohamoud, Ashley McKenzie and many others. Obviously, the women in my life that I am surrounded by such as my wife, my mother also influenced my work.

Early in the design process, however, I noticed there were too many to actually include them all. So I realized the portraiture would be symbolic. It was essential to include portraiture in the piece because clear visible representation matters. I painted a powerful Black woman as a manifestation of our beauty, our unapologetic brilliance with an unwavering gaze, holding our city accountable. Reminding us that we are here. The Boy represents the future generation: a symbol of a child that we need to protect, keep safe and breathe faith into. It is also the child within us that  needs to be protected. Only changes in reality will make that child feel safe inside.

AGOinsider: In 2020, we’ve seen a rise in global awareness of anti-Black racism. What role do you think public art like Patterns of the People play in our current climate?

Deluxo: Let me share with you a story. My wife and I are visiting a large art gallery/ museum in Paris and there are incredible works by masters all throughout the museum. We arrive in one room that is filled with a collection of black-and-white photography. We moved through fairly quickly, and as I glanced at a photo, I did a double-take - it stopped me in my tracks.  It was a portrait of a Black man. I stopped, went back, looked at it and read the statement. Within the same moment this was happening, I reflected on what made me stop - and it was simple. The image was of a person like me, that I identified with.  There was an automatic connection and acknowledgement that we exist. That our story is relevant, our lives are important.

Phrases like “representation matters” have been circulating throughout the public mainstream. I can’t express how much this phrase truly matters. Through the Black Lives Matter movement, we have seen this global awareness and the next step for meaningful change to occur we must see shifts in the dynamics of power. Whether it is more Black curators, project management in art organizations or giving us opportunities to occupy these spaces/ positions.

So public art pieces like this are very important - necessary. To paint ourselves in the picture and equation of Canada. I will continue exploring this relationship between portraiture and patterns in future work. In our fight to confront anti-Black racism, I hope we see this piece as one of those incremental victories moving forward.