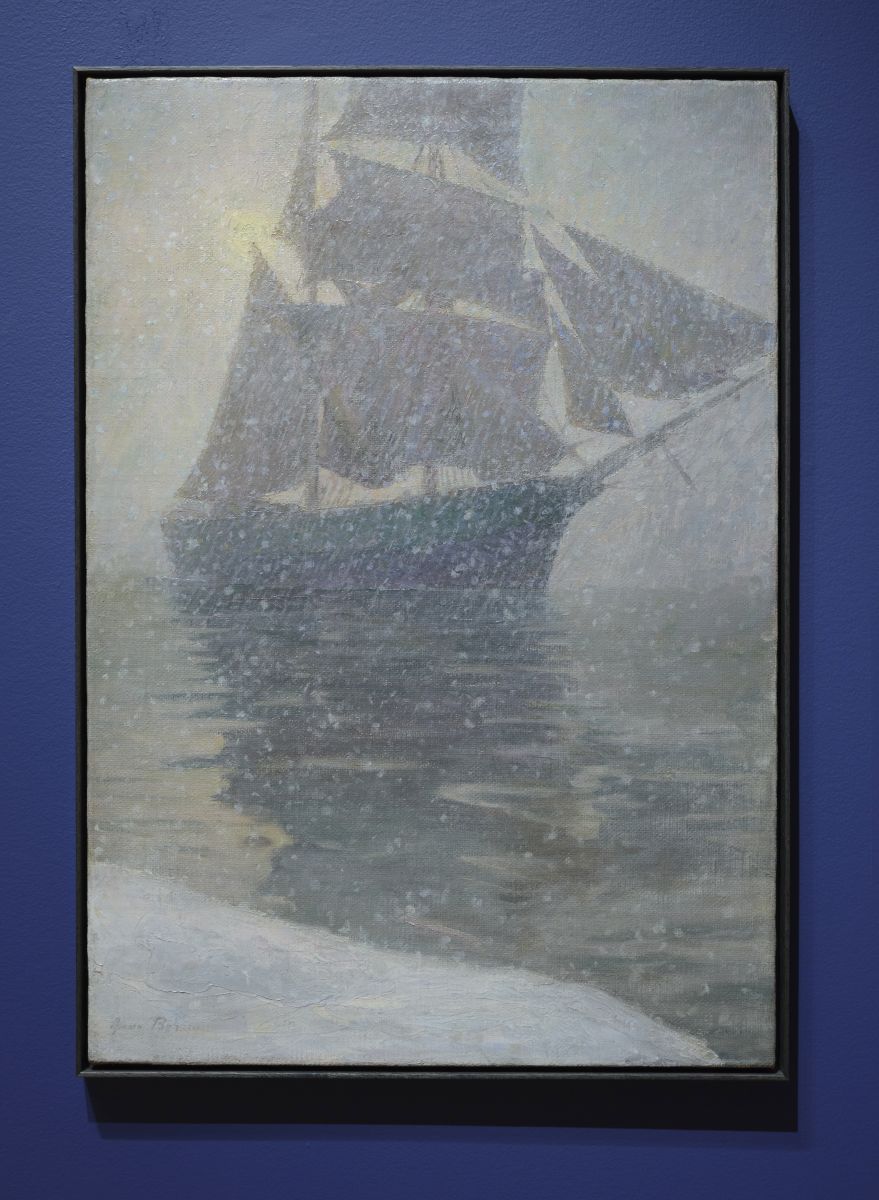 In January of 1913, Contemporary Scandinavian Art, a traveling exhibition organized by the American-Scandinavian Society, arrived in Buffalo, New York. Among the 176 works featured, seven were by the Swedish artist Anna Boberg, the sole woman artist in the entire exhibition.

Her inclusion was not by chance − as early as 1905, her extraordinary paintings had earned her praise on both sides of the Atlantic, following exhibitions in Stockholm, Paris, Berlin and Chicago. It was the Boston Daily Globe that lent her the title “Sweden’s greatest artist” in 1906, in an article sensationally entitled “Barefoot in Polar Snow: Swedish Woman Artist Braves Cold for Arctic Effects.”

Born into a wealthy and creative family in Stockholm in 1864, Boberg was largely self-taught. A contemporary of abstract painter Hilma af Klint (1862–1944), Boberg’s career was defined by her paintings of the arctic landscapes of the Lofoten Islands, an archipelago off the northern coast of Norway, 150 kilometres above the Arctic Circle.  She and her husband first visited the region in 1901. Enamored by the landscape, she remained there to paint even after her husband returned home and would return numerous times over the next 30 years, summer and winter, to paint in different light conditions. “Translating the rich sensorial experience of the Arctic sea,” describes Caroline Shields, AGO Associate Curator and Head of European Art, “became Boberg’s enduring passion for the final three decades of her life.”

Recently acquired and making its AGO debut March 12, Sunlight and Showers (1901-12) stands apart in Boberg’s oeuvre and dates to her earliest years in Lofoten. While much of her later work focuses on fishing vessels and human activity, Sunlight and Showers is, according to Shields, “an expressionist tour-de-force that captures the atmospheric effects of an Arctic snow shower.”

Not just a painter, Boberg’s artistic practice included textile design, ceramics and glass as well as writing − she wrote the libretto for an opera, an autobiography and various travelogues.  The arrival of this painting in Toronto, Shields says, is thanks in part to the research and support of two of the world's leading Boberg scholars, Arts & Science Postdoctoral Fellow Dr. Isabelle Gapp, from the University of Toronto, and Honorary Research Associate Dr. Eva-Charlotta Mebius, University of London. Their respective research, in tandem with the AGO’s acquisition, is helping to reinvigorate interest in her work.

“Boberg,” says Mebius, “in her lifetime, was compared to Monet, Segantini and Van Gogh, yet her contribution to landscape painting has not been fully recognized in art history. My research looks at the global reception of Anna Boberg’s landscapes from the Arctic, France, Italy, Switzerland, Jerusalem, and Egypt, and seeks to rewrite the predominantly male history of landscape painting to include her intelligent and original work.”

In Boberg’s 1934 autobiography, she reflected on her arctic travels, a passage of which Mebius has kindly translated for us here: “Defying the disagreeable conditions is worth the trouble, because it is simply wonderful to behold the water’s evaporation glittering like ice as it rises above the dense fog, through which the sun’s red disk glows, rather than shines. Condensation and mist welter, becoming denser, then dispersing, then torn apart, all the while revealing new perspectives of moving sceneries. And if you are lucky, you might get to experience the fabled phantom of the sea.”

Boberg goes on to describe a “ship of gigantic proportions” which, “without a sound, glided forward in the draft of the cursed breeze […] a magnificent icicle fringe dipped into the dark green reflection of the water.” The passage concludes, “Thus, the Flying Dutchman of the Polar Seas glided past me in all its terrifying glory and disappeared in the fog.”

It is in comments like these and in her self-aware styling as a woman deeply embedded in nature, carrying her homemade easel in the snow, Shields says, that we see the originality of Boberg’s contributions. “The painting, much like this passage from her memoir, combines her passion for faithfully describing atmospheric effects with a haunting poetic flourish. Together they situate her work as a bridge between two major movements of this period—Impressionism and Symbolism, which radiated across Europe and the Atlantic.”

It is that tension that resonates with Dr. Gapp, who says she finds in Boberg’s paintings “an antidote to prevailing national narratives in Norwegian and Swedish art history.” In her scenes of the glaciers and the local fishing industry of the Lofoten Islands, Gapp sees an exciting intersection between art, environmental history and contemporary climate change. “Boberg,” Gapp says, “offers an alternative to the delineation of the Arctic as a hyper-masculine space, describing herself as a ‘polar researcher’ at a time when men dominated polar exploration, art and science.”

Sunlight and Showers will go on view March 12 in the Richard Barry Fudger Memorial Gallery on Level 1, and is included with general admission.