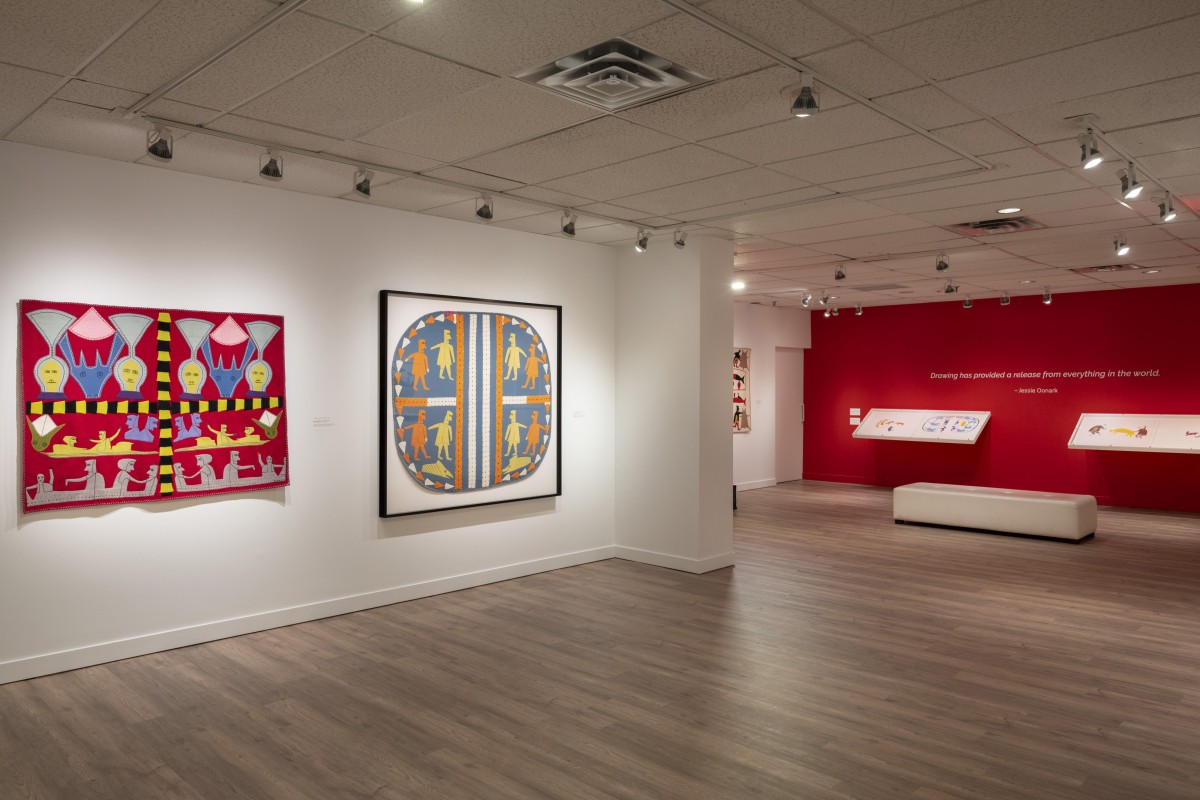 On view now at the Textile Museum of Canada is ᑕᑯᒃᓴᐅᔪᒻᒪᕆᒃ Double Vision, an exhibition highlighting the textile artworks by three groundbreaking women artists from Qamani`tuaq (Baker Lake), Nunavut: Jessie Oonark (1906-1985) and her two daughters, Janet Kigusiuq (1926-2005) and Victoria Mamnguqsualuk (1930-2016). In partnership with the Toronto Biennial of Art, the works in the exhibition build on the museum’s existing large permanent collection of textiles by Inuit artists. With a focus on a highly-distinctive art form called nivingajuliat that developed out of government-sponsored craft programs in Nunavut beginning in the 1960s, visitors can see intricate bright wall hangings alongside drawings by Oonark and Mamnguqsualuk and paper collages by Kigusiuq.

Curator Candice Hopkins, the former senior curator of Toronto Biennial of Art 2022, notes, “Together, the works of Oonark, Kigusiaq, and Mamnguqsualuk represent a matriarchal practice, one that is explored through the making of nivingajuliat, and how this practice and their kinship informed their collages, prints, and drawings.” In addition to Kigusiuq and Mamnguqsualuk, eight of Oonark’s children became artists helping to form the cornerstone of artistic production in the community of Qamani`tuaq. 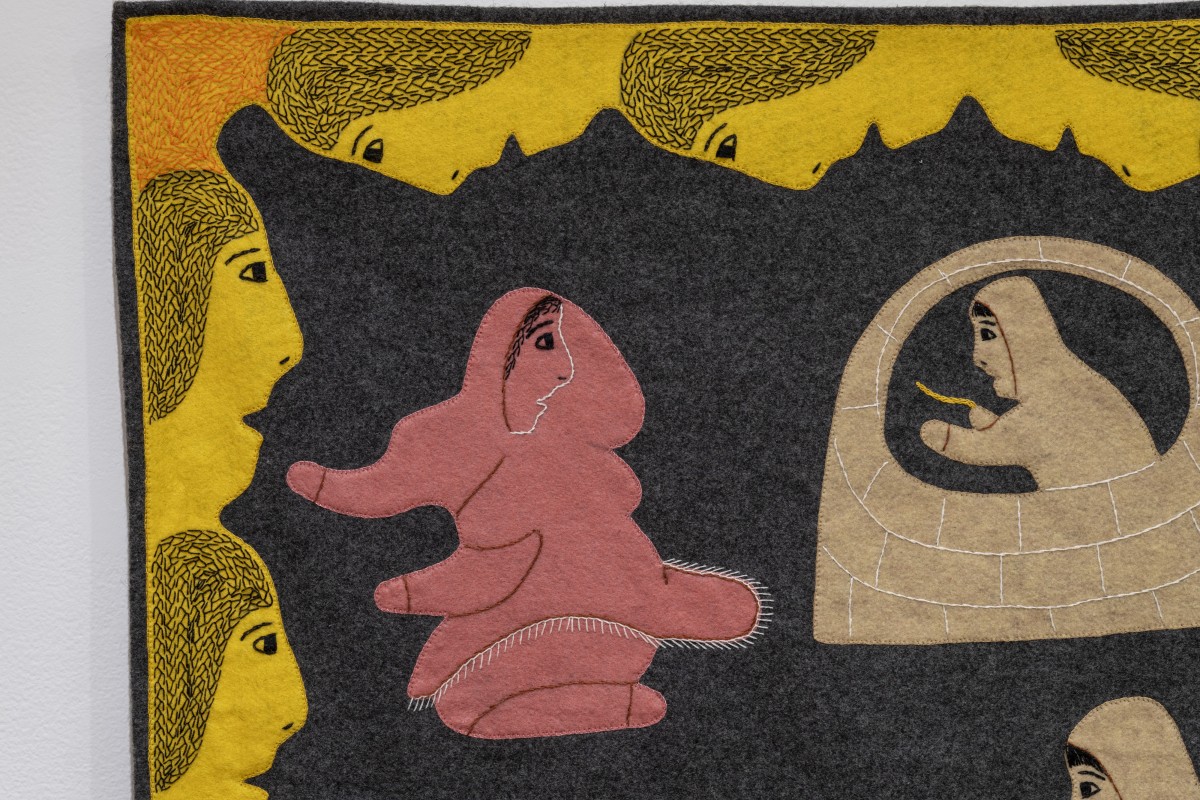 “Jessie Oonark has had a profound influence on Inuit textiles although she only began drawing and working with wool after moving to Qamani`tuaq at the age of 59,” said Hopkins. Regarded as one of the most influential Inuit textile makers, Oonark’s artistic practice emphasized the representation of women, as well as women’s tools – such as the ulu and clothing like kamiks and amauti. Her art style is characterized by its symmetry, which has been described as a kind of double vision.

Kigusiuq was always interested in representing the land in her artworks, particularly that of her family’s summer camp at Kitikat. She was originally best known for her detailed drawings but over time shifted to collage works when her arthritis made it increasingly difficult to draw. She was heavily inspired by the ‘in-between time’, the moment at dusk when the shifting light changed the way the landscape looked. She often depicted this by using patterns to create the land in her works. 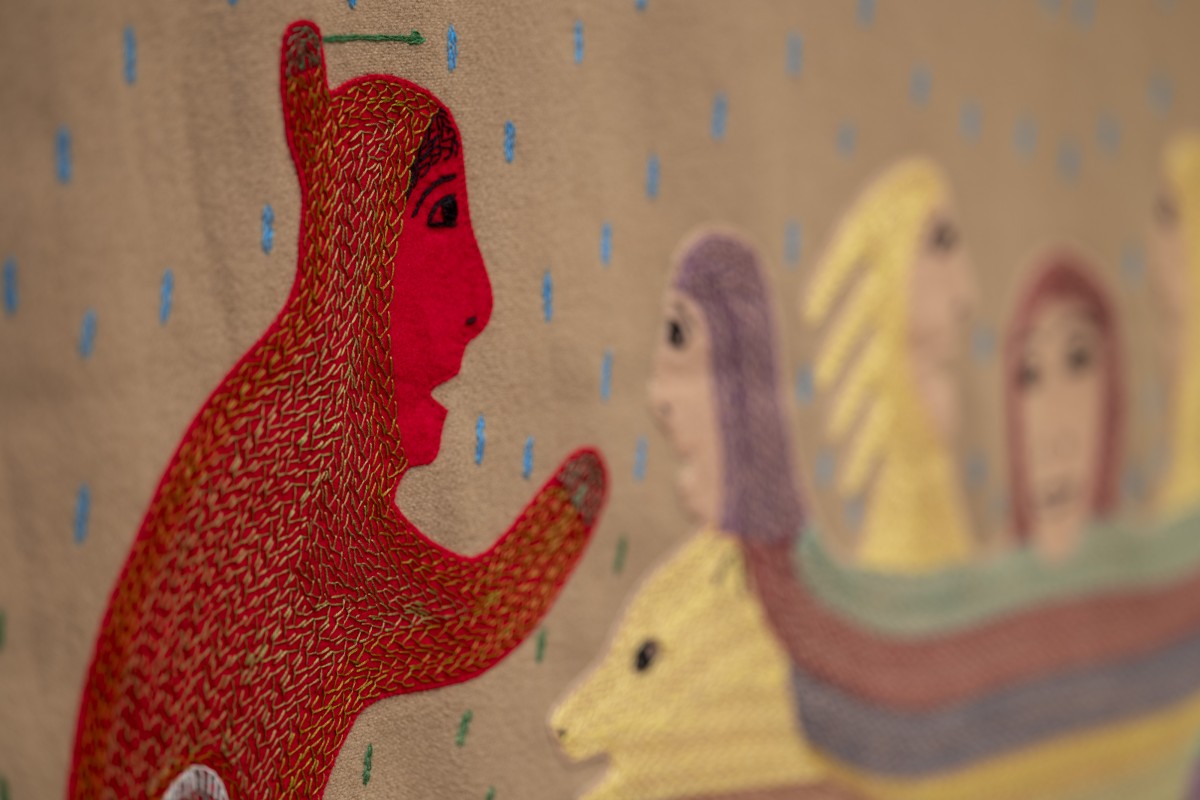 Lastly, through ink, coloured pencils and tapestries, Mamnguqsualuk enjoyed telling the stories of Qiviuq (Kiviuq) life in the form of whimsical landscapes filled with people, animals and beings from the spirit world. Her artworks show people and spirits sharing the same natural environment – mixing the real and the imaginary. Currently on view at the AGO through January 2, 2023 is a selection of 17 drawings by Victoria Mamnguqsualuk on Level 2 in the Bovey Gallery (225). This solo exhibition is curated by Wanda Nanibush, AGO Curator, Indigenous Art.

ᑕᑯᒃᓴᐅᔪᒻᒪᕆᒃ Double Vision: Jessie Oonark, Janet Kigusiuq, and Victoria Mamnguqsualuk is on view at the Textile Museum of Canada through March 31, 2023. Access to a virtual tour of the Double Vision exhibition is available here.

Sign up to AGOinsider now – don’t miss news about current and upcoming exhibitions and other exciting art beyond AGO walls.