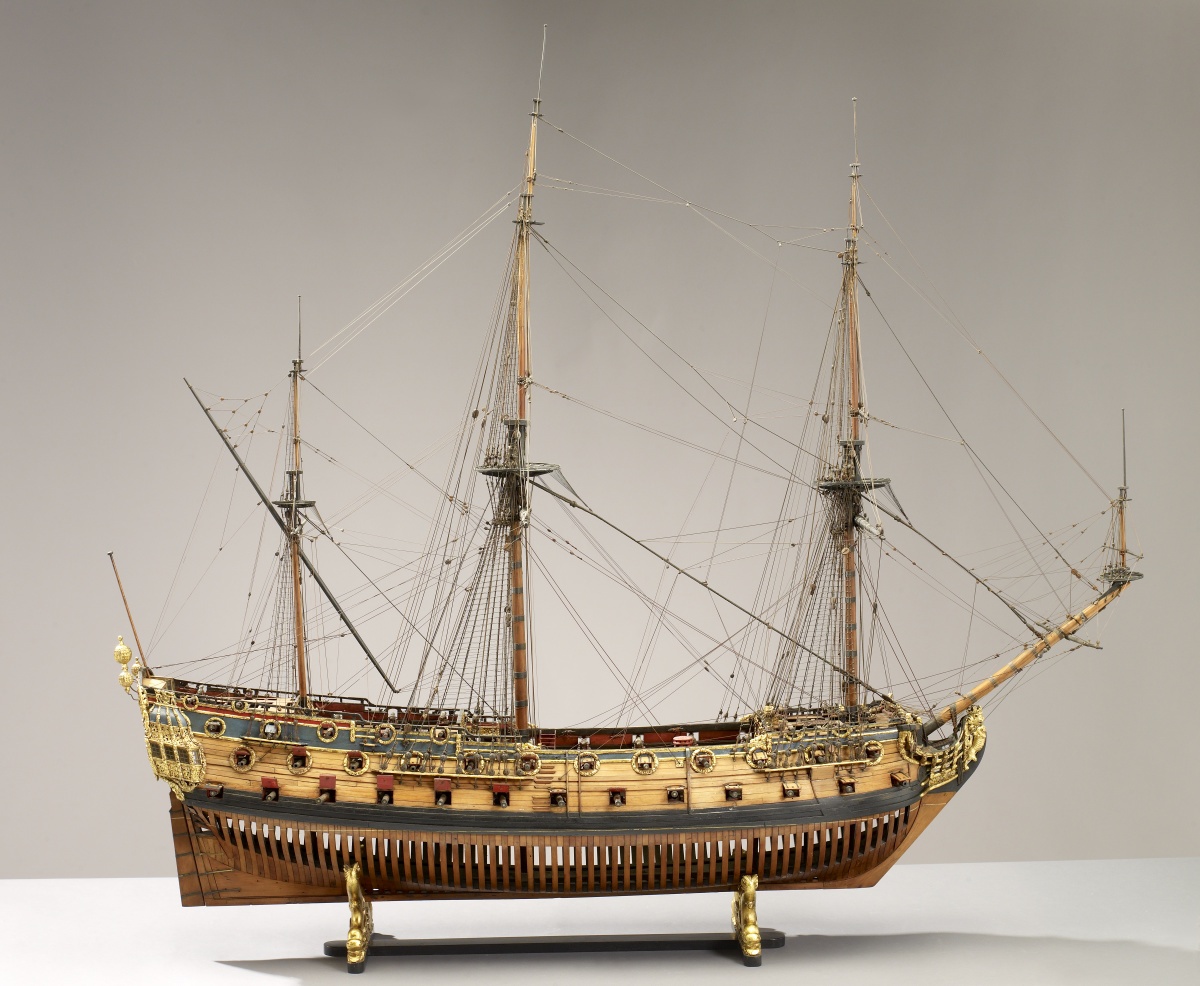 The AGO invites you to celebrate Ken Thomson and Michael Turner’s dedication to collecting ship models and to discover the link between Turner’s passion for ship models and his lifelong work on the Tintin tales, which feature ships not unlike the models in the Thomson Collection.

The highly anticipated film The Adventures of Tintin got its Canadian release yesterday. Based on Hergé’s classic adventure books, the film stars Jamie Bell as fearless journalist Tintin and Andy Serkis as his companion Captain Haddock. Together the pair set off on a treasure hunt for a sunken ship commanded by Haddock's ancestor.

We've got some great activities happening at the AGO to celebrate the release of the film. Not only can you come and see the kinds of ships that those in the film are based on, we've also got a great link to Tintin thanks to famous art collector Ken Thomson, who donated the AGO's entire ship model collection.

Thomson’s interest in ship models grew out of his close friendship with British publishing executive Michael Turner. A renowned scholar and collector of ship models, Turner also co-translated the famous/popular Belgian Tintin comics from their original French into English with Leslie Lonsdale-Cooper. Thomson met Turner in 1987 when Thomson acquired the publishing house that Michael Turner was running at the time. Turner shared his passion for ship models with Thomson, and soon the two began working together to establish the Thomson Collection of Ship Models.

Below the trailer you'll find some great examples of ships in our collection that are linked to the film. We hope you'll come and see them for yourselves! At the bottom of this post we've also got  information about some great Tintin activities taking place in the Gallery. 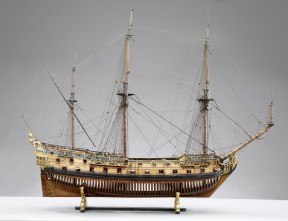 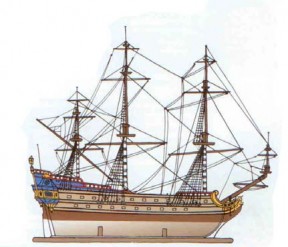 The French story The Secret of the Unicorn was set on a vessel belonging to King Louis XIV’s fleet, while the English-language version was set on one belonging to the British monarch Charles II. The events of Hergé’s story date back to 1698, making the Unicorn a contemporary of La Licorne, the 17th-century British 70-gun warship in the Thomson Collection. Both ships are third-rate, two-decker vessels with three masts, quarter galleries at the stern, fighting tops and a spirit topmast on the bowsprit. The model of The Unicorn was created after consulting several ship drawings, while the Thomson Collection’s model, previously identified as the Breda, likely also represents another ship of that period, either the Nassau or the Essex, which launched in 1699 and 1700 respectively.

This ship’s adventure was first published in daily comic strips in the French newspaper Le Soir between June 1942 and January 1943. The original drawing of the ship was not historically accurate – the actual ship had only a single row of gunports, 20 cannons and one row of windows in the stern galleries. Eventually, Hergé realized that a ship of higher rank would be more appropriate, and when it came time to publish The Secret of the Unicorn as a book, he turned to historical sources, conducting thorough research on shipbuilding in the late 1600s. The decoration of the ship was largely copied from Jean Bérain’s 1689 designs for the Brilliant. Bérain’s sketches are strikingly similar to certain parts of the Thomson model, particularly the stern galleries of the ship. 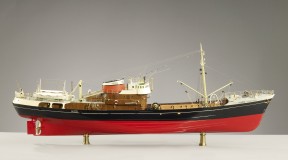 The Sirius, which features in Herge’s Red Rackham’s Treasure, was named after the first entirely steam-powered ship that crossed the Atlantic Ocean in 1838. The actual form of the vessel, however, is more modern, dating to the period around the book’s publication (1944). Like the Unicorn, the Sirius was a composite creation based on a number of real vessels. The main design of the Sirius was based on a trawler called John-o.88, which was put into service in 1936 at Ostend, Belgium. For close-up illustrations of more detailed parts of the ship such as the windlass, a device used to lift heavy objects, Hergé copied from photographs of various other steam engine trawlers.

Hergé’s Sirius is strikingly similar to the Lammermuir in the Thomson Collection. The two trawlers were contemporaries, as the Lammermuir was built in Aberdeen in 1950, just years after the Sirius was introduced in the Tintin series. A model of Hergé’s Sirius, made in 1952 by A. Van Noeyen, bears a significant resemblance to the Lammermuir in its colouring, layout and size. Both ships are trawlers known as “sidewinders,” in which the trawling nets are set up along the sides of the ship. The main difference is that the Sirius was a steam-powered vessel, whereas the Lammermuir was the world’s first diesel-engine deep-sea fishing trawler. 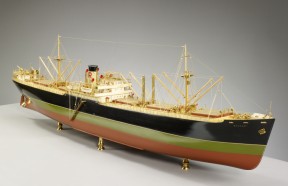 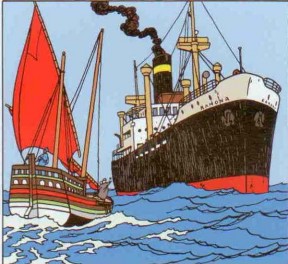 Many of Tintin’s adventures feature cargo ships, from the quarantined Pachacamac in Prisoners of the Sun to the Karaboudjan in The Crab With the Golden Claws. Hergé drew the Ramona from the book The Red Sea Sharks using photographs and a detailed plan of the steam ship Egypt, which was built at the Jos Boel & Son shipyard in Amsterdam in 1946. The more detailed sketches of the interior were taken during a four-day sail between Belgium and Sweden aboard the Reine Astrid.

Of the numerous cargo ships in this gallery, the Ramona most resembles a model in the Thomson Collection built by William Doxford & Sons Ltd. in Sunderland, England, in 1939–1940. This model served as the original design for four motor cargo ships: the Rodsley, Rawnsley, Rookley and Reaveley. The Rawnsley was bombed by an aircraft off the Greek island of Crete during World War II while on its way from Haifa, Israel, to Souda Bay, Crete. The Rodsley, Rookley and Reaveley continued to operate for the next three decades for various shipping companies around the world.

The Ramona and all the vessels built from William Doxford’s model are excellent examples of the most modern cargo ships built during World War II. They would have been similar in size, tonnage and appearance – as well as in function – as merchant cargo ships. Both the Ramona and Doxford’s model have tall air vents rigged with cargo derricks in front the bridge, which were contemporary innovations. Other modern features include the radio telegraphy rigged between the masts, as well as the angle of the bow and round shape of the stern. These additions differ from earlier cargo ships such as the Glamis (1936) and the Menin Ridge (1924), both of which can also be seen in the Thomson Collection.

Because the SS Egypt and the Rodsley, Rawnsley, Rookley and Reaveley were built during wartime, they would have been armed with guns to protect themselves against attack from enemy ships. However, it is likely that Hergé did not include guns on the Ramona, because Captain Haddock is unable to fight back after a submarine attack on the ship in The Red Sea Sharks and must radio the U.S.S. Los Angeles for assistance.

Join Tintin at the AGO for adventures in 2012!

Tintin and the Secret of the Ship Models
January 1, 2012

Join us on New Years Day as we go on a nautical adventure with Tintin and the AGO’s Ship Models collection! Inspired by the AGO exhibition Tintin at Sea, our own ship models collection and the Steven Speilberg movie, The Adventures of Tintin, we'll be tapping to the tunes of an east coast fiddle, learning how to step dance, making treasure maps in a bottle and floating homemade boats! It's going to be a rollicking good time!

Join Simon Stephens and Lesley Lonsdale-Cooper to hear about ships, ship models and Tintin.
Simon Stephens is curator of the Ship Model and Boat Collection at the National Maritime Museum, London. He curated the Thomson Collection of ship models installation at the AGO and co-curated the National Maritime Museum’s 2005 Tintin At Sea exhibition. Lesley Lonsdale-Cooper co-translated Hergé's Tintin books into English with Michael Turner.  Michael introduced Ken Thomson to ship models collecting.