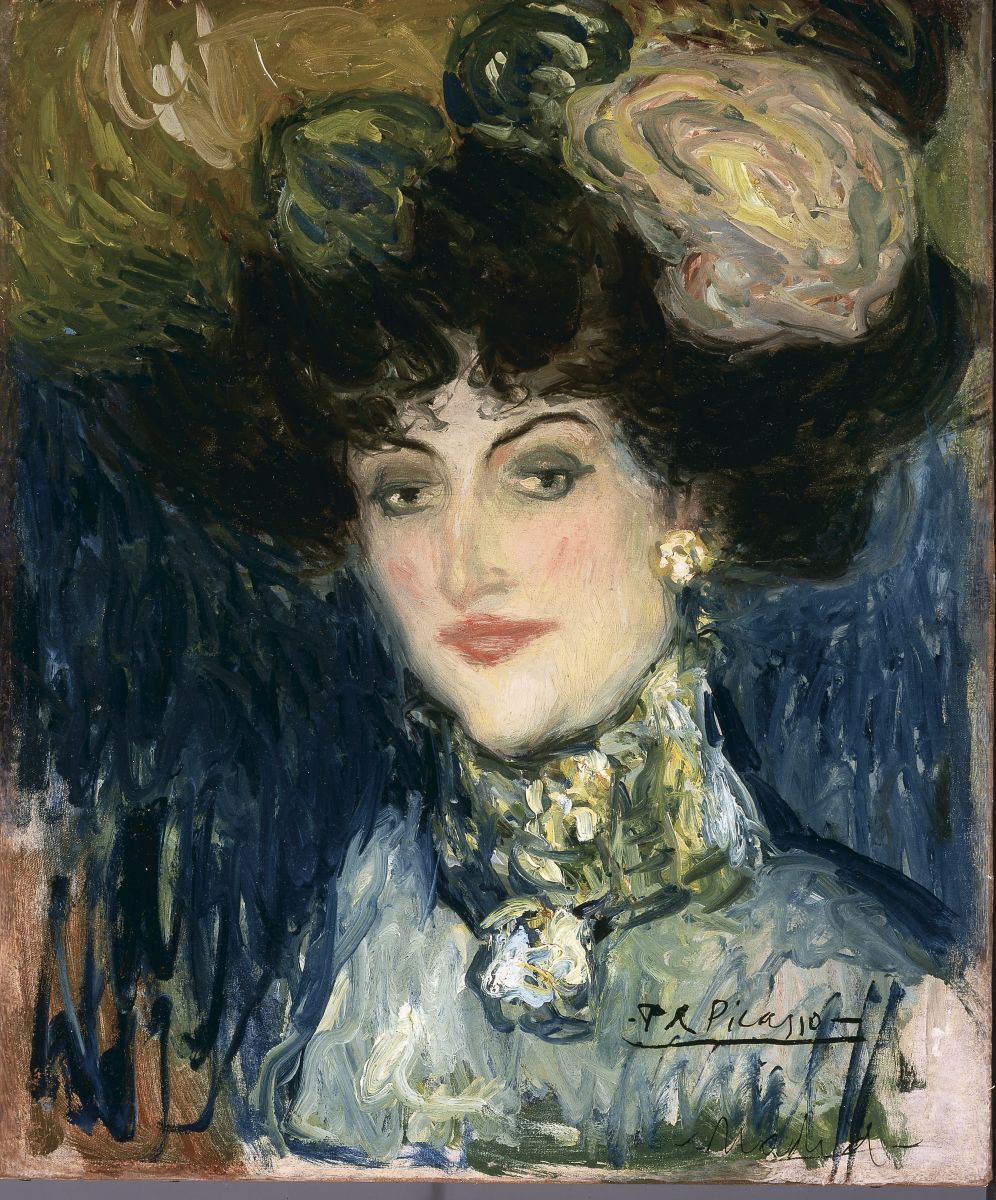 A striking portrait of a beautiful woman, exuding all the hauteur and presence of a high-born society figure, Pablo Picasso’s Woman with a Plumed Hat (Madrid, 1901) is one of several portraits of sex workers currently on view in Picasso: Painting the Blue Period. Painted in 1901, when Picasso was only 19 years old, the portrait is significant not only for its allure, but is a powerful demonstration of his rejection of the snobbish, bourgeois values of turn-of-the-century Madrid. Here, approximately eight months before he begins his radical experiments with blue, we see Picasso ennoble society's so-called fallen women, finding in their depiction an avenue for social critique.”

“Simultaneously compassionate and satirical, Picasso’s depiction of the heavily powdered and rouged courtesan in Woman with a Plumed Hat is motivated by the same youthful rebelliousness informing the avant-garde journal Arte Joven [Young Art] that he cofounded in Madrid in 1901,” says Kenneth Brummel, Associate Curator of Modern Art at the Art Gallery of Ontario..  “This painting is most probably an imaginary portrait of a woman who represents of la vie parisienne, specifically the demimonde of the seedy Montmartre district of Paris.  Utilizing the vigorous brushwork and scandalous content of the Parisian avant-garde, specifically Henri de Toulouse-Lautrec, Picasso in Woman with a Plumed Hat lampoons the conventional notions of beauty and status upheld by Madrid’s conservative bourgeoisie.”

Thanks to the generosity of the McNay Art Museum, this is not the first time AGO visitors have seen this artwork. Indeed, Toronto has a decades-long relationship with the work of Picasso. It was in 1964, when the AGO hosted the landmark exhibition Picasso and Man (1964) organized by then curator Jean Sutherland Boggs. The first ever exhibition of Picasso’s in Canada, that presentation included both the AGO’s Crouching Beggarwoman (Barcelona, 1902) and The Soup (Barcelona, 1903) as well as other works in the current exhibition, among them Street Scene (Paris, 1900; San Francisco Museum of Modern Art), Nude with Cats (Paris, 1901; The Art Institute of Chicago), and Woman with a Plumed Hat (Madrid, 1901; McNay Art Museum).

The first modern art museum in Texas, the McNay Art Museum was founded following a bequest by Ohio-born heiress and art collector Marion Koogler McNay. Her collecting habits were unique - this Picasso for instance was acquired later in her life, sometime after 1944. Rather than traveling to California to view the work, the gallerists brought the painting, along with other candidates for purchase, to McNay’s home. Typically works would be presented in the entrance hall of the residence, sometimes in the presence of students and/or other members of the San Antonio art community, and McNay would make her decision on what to purchase in the days afterward. Her decision to purchase this work by Picasso is indicative of her inclination to collect unique works by artists, preferring strong colors and works that demonstrated the “hand of the artist.”

Home to one of the finest collections of prints and drawings in the Southwest, the McNay is currently host to an exhibition Monet and Whistler in London, the centrepiece of which is no less than the AGO’s own Charing Cross Bridge, brouillard (1902). Curated by Lyle W. Williams, Curator of Prints and Drawings, Curator of Modern Art,, the exhibition features numerous depictions of the Thames River in London, including Monet’s foggy, green gold portrait, alongside American ex-pat artist James McNeill Whistler lithograph Early Morning (1878), and prints by James Jacques Tissot, John Marin and contemporary New York artist Yvonne Jacquette.

“Bodies of water have long captured the imaginations of artists, particularly Claude Monet, who often explored the magical effects of light and atmosphere on water at different times of day,” said Williams. “The McNay’s Monet and Whistler exhibition explores the aquatic fascinations of nine artists through rarely seen artworks from the McNay Collection in conversation with the Monet masterpiece on loan from the Art Gallery of Ontario.”

Courtesy of the McNay Art Museum, take a trip to San Antonio and enjoy a slow look at one of Toronto’s great treasures.

On view through January 16, 2022, Picasso: Painting the Blue Period is curated by the Kenneth Brummel and Dr. Susan Behrends Frank. The exhibition is co-organized by the Art Gallery of Ontario, Toronto and The Phillips Collection, Washington, DC, with the exceptional support of the Musée national Picasso-Paris.

Subscribe to AGOinsider for more behind the scenes stories about the masterpieces featured in Picasso: Painting the Blue Period.