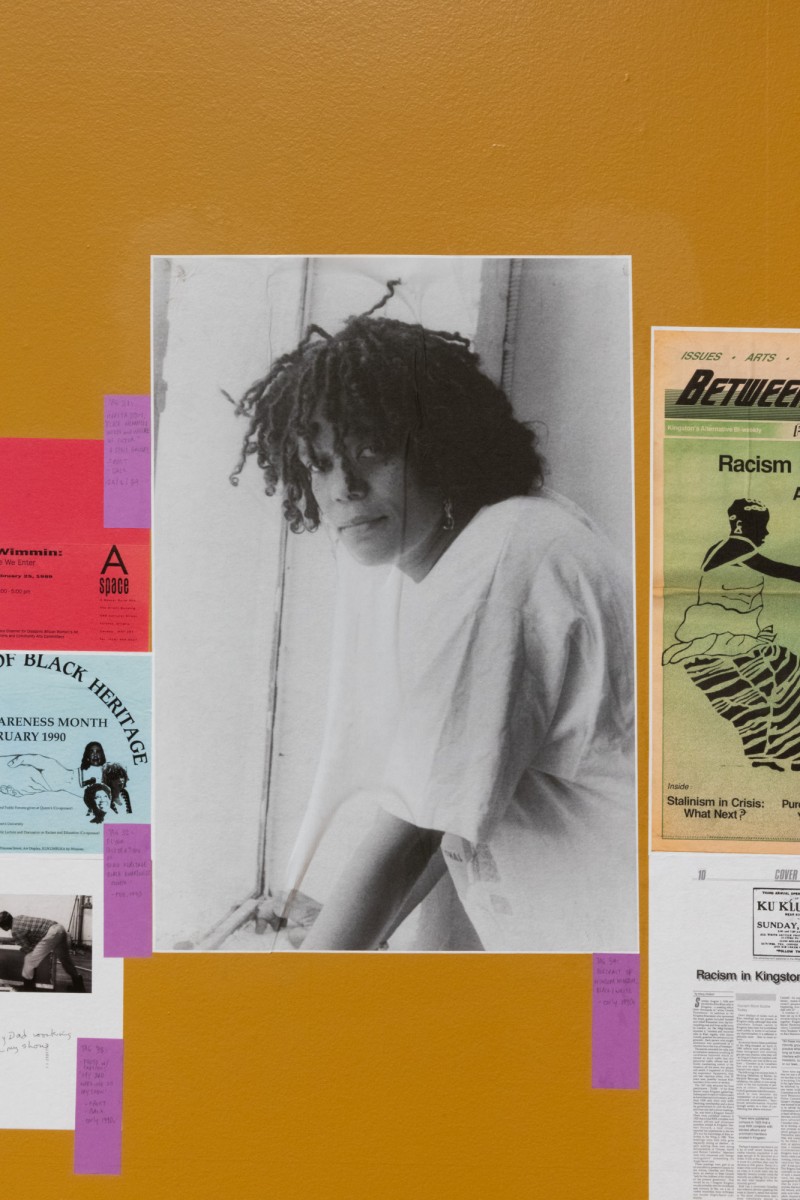 Installation detail of Pamila Matharu’s dear winsom from Where Were You in `92? at Agnes Etherington Art Centre, 30 July–4 December 2022. Photo: Paul Litherland

An exhibition on view now at the Agnes Etherington Art Centre in Kingston, Ontario begins with a question: where were you 30 years ago?

In 1992 and the years shortly after, interdisciplinary artist and educator Pamila Matharu was finding her footing as a young artist living in Toronto. It was spring ‘92 when an anti-racism protest turned into an uprising along Toronto’s Yonge Street. The protest, first in large response to the acquittals of the LAPD officers who brutalized Rodney King, later intensified when news broke that Peel Regional Police had killed a young Black man named Raymond Lawrence. This uprising, described by some as a riot, served as the catalyst for the creation of a groundbreaking, Black artist-led youth mentorship called Fresh Arts. Matharu soon got involved in the program, led by Winsom Winsom, the Ashanti Maroon multimedia artist, educator and activist. Fresh Arts gave many marginalized and disenfranchised youth in the city a much-needed outlet to channel their frustrations and lived experiences into art.

Through Where Were You in ‘92? at the Agnes Etherington Centre, Matharu brings the past forward through history and geography, not only to present the “embodied archives” of Fresh Arts “with sound, image, found texts and acts of counter-archiving of personal and political experience”, but to underscore the art and longstanding influence of her mentor Winsom Winsom. Matharu asserts that Winsom’s legacy – while known in Kingston and Canada overall – is severely under-represented and under-recognized. Winsom Winsom’s installation The Mask We Wear is on view alongside Where Were You in ‘92?, recently acquired by the Agnes Etherington Centre. This work also was once on view at the AGO in 2018 and 2019, as part of Winsom’s solo exhibition, I Rise. Where Were You in ‘92? is curated Emelie Chhangur, Nasrin Himada and Charlotte Gagnier.

Wanting to learn more about the legacy of Fresh Arts, the significance of the exhibition and the works within, we spoke with Matharu. 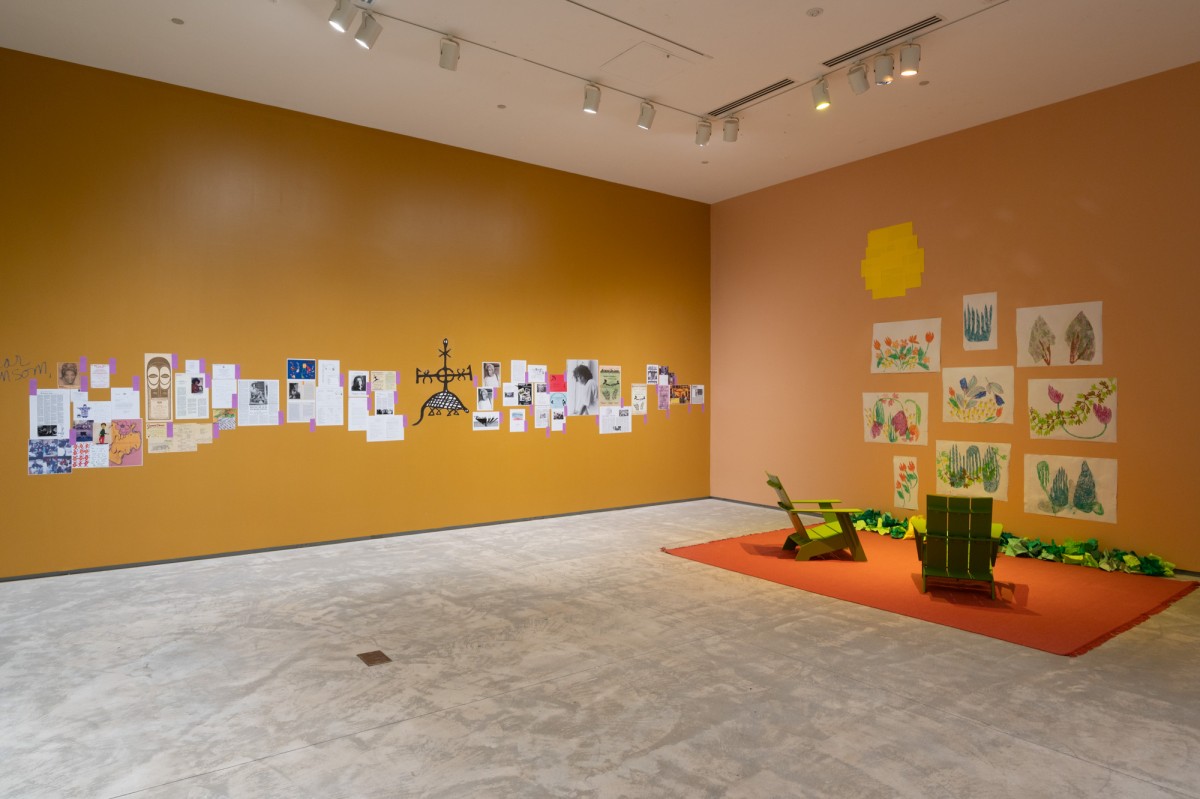 Installation view of Pamila Matharu’s Where Were You in `92? at Agnes Etherington Art Centre, 30 July–4 December 2022. Photo: Paul Litherland

AGOinsider: Using the exhibition’s title as a jumping-off point, tell us more about where you were and the art you were making in 1992. Looking back at that time of your life as an artist, what are the through lines – conceptually, visually and otherwise – that connect to the present?

Matharu: In 1992, I was completing Grade 13 at A.Y. Jackson Secondary School in Willowdale, up in North York. I was in the advanced art program at A.Y. Jackson and was one of the first recipients of the Herbert H. Carnegie Award Scholarship for my first year of post-secondary studies. Nothing really spoke to my spirit or my identity. On May 4th of that same year, I participated in my first public demonstration organized by the Black Action Defence Committee before the Yonge Street uprising broke out. It was a peaceful demonstration. Two days prior, Raymond Constantine Lawrence was shot and killed by a white, plainclothes officer. Sound familiar? Afterwards, Premier Bob Rae commissioned Stephen Lewis to write a Report on Race Relations. The report found that one of the most disenfranchised unemployed youth groups were Black, followed by Indigenous youth. Fresh Arts started that summer, but I did not enroll until the summer of 1994 when racialized youth were given access. I count this as the beginning of my art career at age 20. Looking back, I’d have to say I came up from the margins, moved toward the centre throughout my career and now back, purposefully rockin’ the margins by supporting youth! 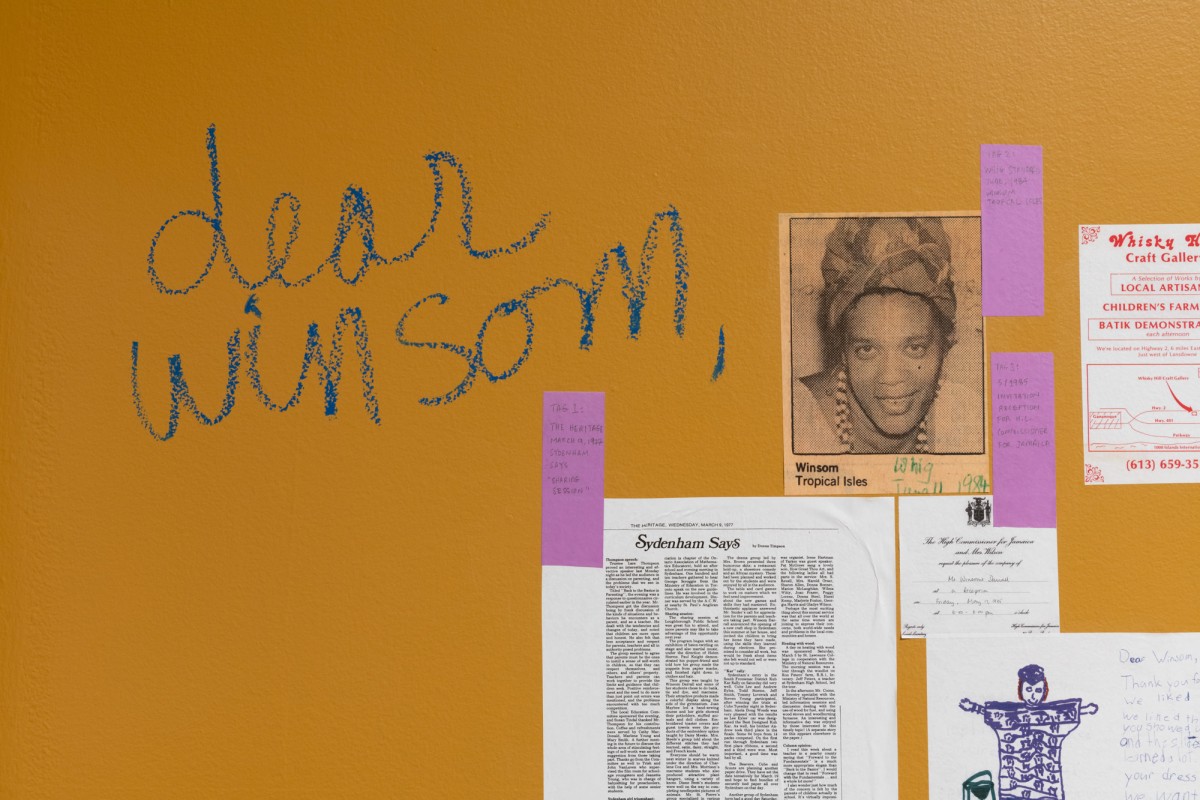 Installation detail of Pamila Matharu’s dear winsom from Where Were You in `92? at Agnes Etherington Art Centre, 30 July–4 December 2022. Photo: Paul Litherland

AGOinsider: In a past interview, you explained that Where Were You in ‘92? is “the embodied archive that I’m carrying with me, a living archive that I want to share before my time is done”. Why was it important for you to present both the legacy of Fresh Arts and your mentor-mentee relationship with Winsom Winsom in the context of an exhibition in an art centre like the Agnes Etherington Art Centre?

Matharu: There is no official record of Fresh Arts in the canon or in the archive (visual arts, writing, music, theatre, media, dance and poetry). It's been my long-held dream to put it on record. I’m just getting started and I’m in no rush to share the story – I can spend the rest of my career sharing it. You can’t take a polyphonic project like Fresh Arts and just expect it to sit quietly in the canon. It’s gonna be loud, revolutionary and full of jubilation. Our resistance is our existence!

Also, I think Winsom Winsom is highly under-represented across Canada. If you look at her global diasporic peers, they are celebrated across nations. [Canadian art institutions] oddly programs [and supports] more Black artists from the global north [instead of] the artists who are present here at home on Turtle Island. Why is that? Winsom’s activism speaks volumes, and I do feel that the labour of Black feminists is highly overlooked here in Canada. She spent close to 30 years labouring in Kingston to help cultivate a desired path for Black Kingston. Why is there no monument of Winsom there?

As a non-Black racialized person, I am acknowledging whose shoulders I’m standing on, who I am adjacent to and in proximity to and how my practice exists because I’m a Fresh Arts mentee and this is my lived experience. I’m centering Black thought rather than white supremacy. I'm still working within a feminist historical framework by affiliating and connecting through and from an intersectional genealogy. Surprisingly, at Agnes Etherington Art Centre right now, my exhibition sits beside Camille Turner’s installation featured in the group exhibition Fugitive Rituals (curated by Myung-Sun Kim). Winsom Winsom’s The Masks We Wear is placed in the room beside Fugitive Rituals. That’s three generations of Canadian artists right there! This is all thanks to Emelie Chhangur (Director/Curator, Agnes Etherington Art Centre, Queen’s University) who orchestrated the dramaturgy. I didn’t feel that [Emelie’s role] was the role of a curator, but of a dramaturge. Her dramaturgy went into shaping the content, context, situation and site specificity of the Agnes project. Emelie initially recommended me as an artist in residence in the Archive/Counter-Archive project, and she connected me to the Kingston Archives and Archives of Ontario through Archive/Counter-Archive.

AGOinsider: How do you feel that Where Were You in ‘92? and Winsom Winsom’s The Masks We Wear speak to each other, being that they both are on view at the same time?

Matharu: To me, Winsom’s spirit is widely floating throughout Agnes and in Kingston right now! My homage in the form of a collage mural gives shape and form to Winsom’s visionary thinking as an artist, organizer, educator and facilitator in Kingston and beyond.

Despite facing abhorrent amounts of oppression in Kingston, she would continue to organize, create awareness and education for members of the Black community; be they women, parents, children and youth. This community continues to face multiple barriers, not just in the education system, but also within the family court system, health care, social services and throughout many facets of Canadian society. 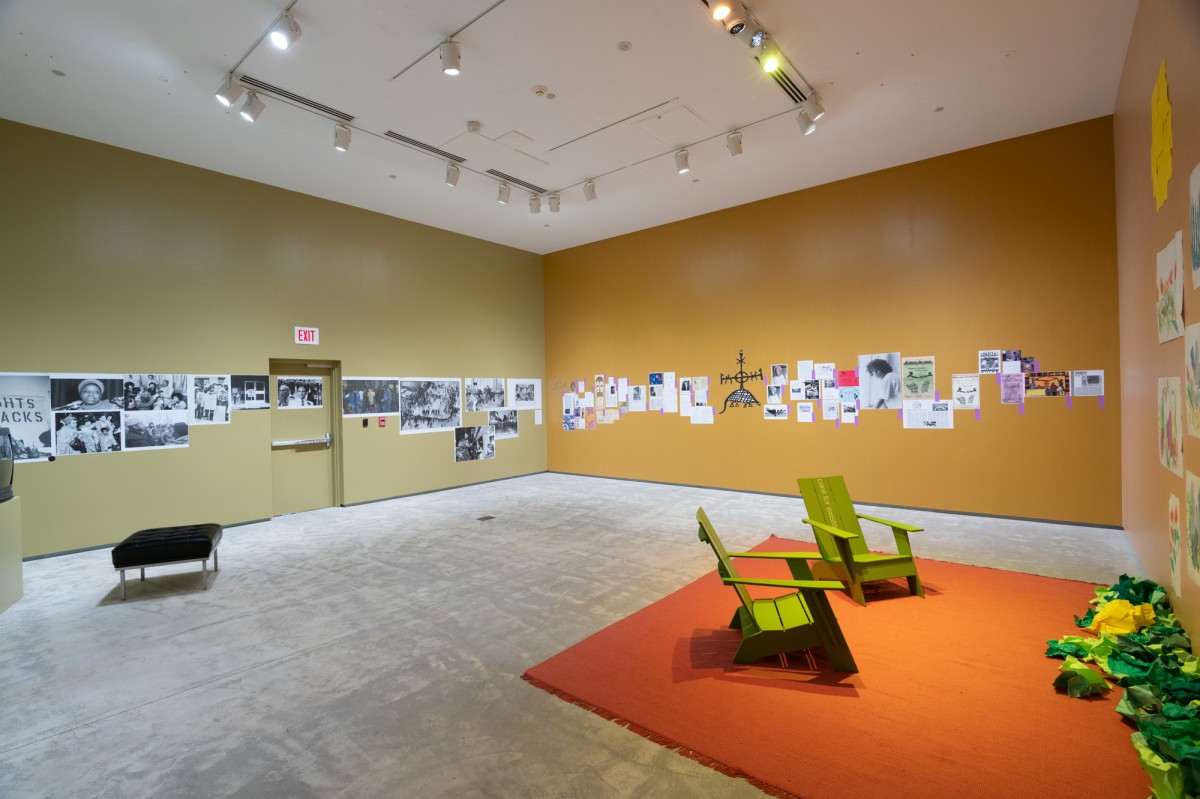 Installation view of Pamila Matharu’s Where Were You in `92? at Agnes Etherington Art Centre, 30 July–4 December 2022. Photo: Paul Litherland

Tell us about researching Winsom Winsom’s work at the AGO E.P. Taylor Library & Archives. What did you learn that you did not know before? How did that research inform your exhibition and your understanding of Winsom’s practice?

Matharu: There are about six boxes of Winsom Winsom’s archive downstairs at E.P. Taylor Library & Archives at the AGO. I’m not going to lie; it was very overwhelming. The boxes arrived officially in late April, and I arranged about 10 visits, highly suggested by Marilyn Nazar, AGO Archivist. When I quickly realized I could not borrow these selected fonds, (as there’s a time-sensitive protocol), Marilyn set us up with a scanner and away we went!  With 100 selections that focused on Winsom’s life in Kingston, we whittled it down to about 50, which made it on the wall at the Agnes Etherington Art Centre. I had fun counter-archiving through this collage mural, it’s titled dear winsom. 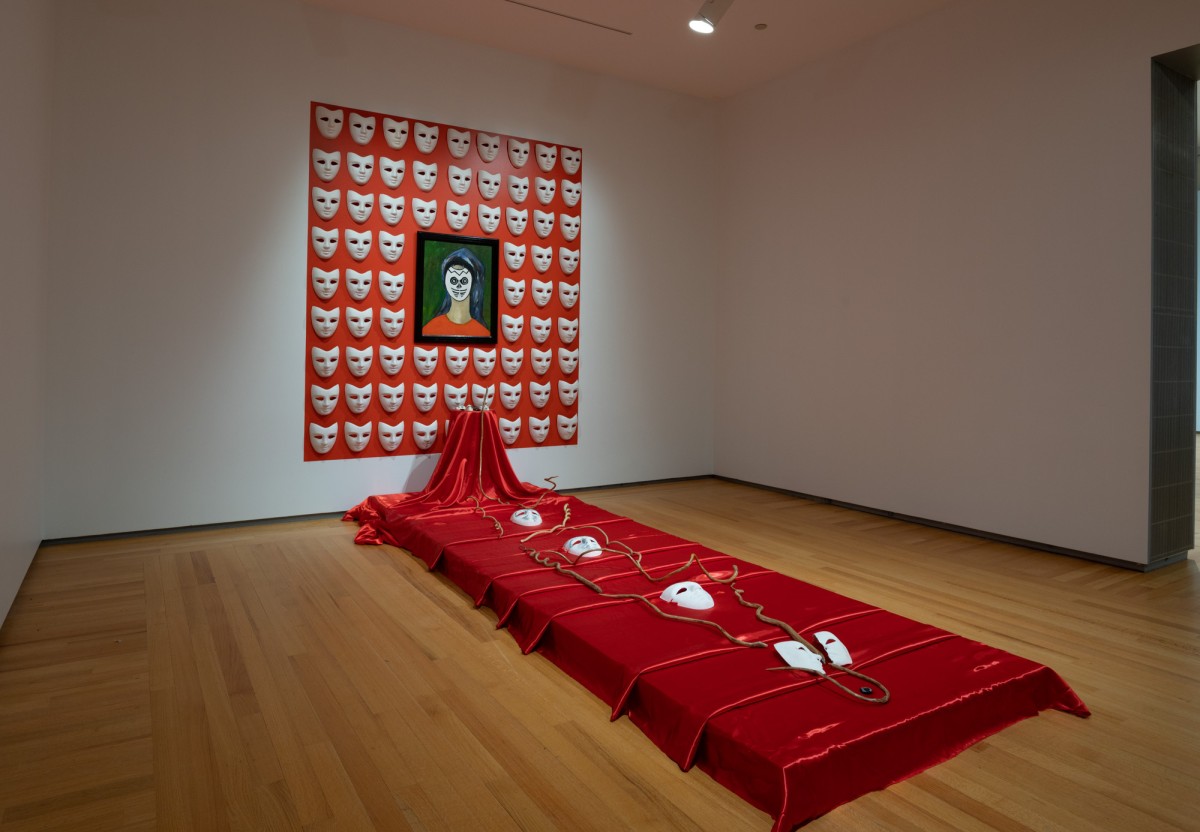 Throughout your practice, you’ve often worked collaboratively as is also the case with this exhibition. What is the connection between you, Ashley T., Cecilia Berkovic and Zoë Alexis-Abrams? Why was it important to work with them?

Matharu: Ashley T. is an emerging Jamaican-Canadian interdisciplinary artist with a background in linguistics. It was important for me to connect a new generation of Black thinkers and artists to Winsom’s legacy. In a way, I’m lifting by including this younger generation, who are unfamiliar with her. This strategy was employed in Fresh Arts, so it needed to come full circle in this exhibition. Jamaican-Canadian filmmaker Laurie Townshend was also involved, and will be involved again in the next ‘chapter’ of this work [on view] somewhere else soon. Cecilia Berkovic is a member of the feminist collective EMILIA-AMALIA. EMILIA-AMALIA member Zinnia Naqvi initially invited me to present as for the Artist File Fair talks around 2016/2017. I was to follow senior Canadian artist Vera Frenkal’s talk. It was my first visit to the E.P. Taylor Library & Archives. I have known Cecilia for over 20 years in the artists’ community and also as a member of the artist collective, Instant Coffee. I knew she would enjoy taking a deep dive with me activating and broadening Winsom’s story for Kingston through her visionary skill set in graphic design and production. Zoë Margot Alexis-Abrams is a late-emerging Métis artist who was born in Kingston and is now based in Toronto. She’s a horticulturist and an artist in vocals and cello, and self-taught in illustration. We first initially talked about gardens, her role in caring for the land and my role in caring for youth; the transformative act of caring for land and people. Her drawings and collages really spoke to me about the human condition, and then I heard her vocals and cello playing. This is Zoë’s first collaborative installation experience in a public museum/gallery space. As a decolonial arts methodology, I use my invitational platforms as an act of care by inviting women and non-binary folks to share my platform, everyone benefits, especially the public. I believe that care is a form of love, and I sure do love women and contemporary art!

The exhibition Pamila Matharu: Where Were You in ‘92? is on view at the Agnes Etherington Art Centre through December 4, alongside Winsom Winsom: The Masks We Wear.

In case you missed it, watch Pamila Matharu’s Art in the Spotlight in which she discusses her experimental documentary stuck between an archive and an aesthetic, and the politics of archives with Adrienne Connelly, Programming & Outreach Librarian and Amy Marshall Furness, the Rosamond Ivey Special Collections and Archivist and Head, Library & Archives at the AGO.