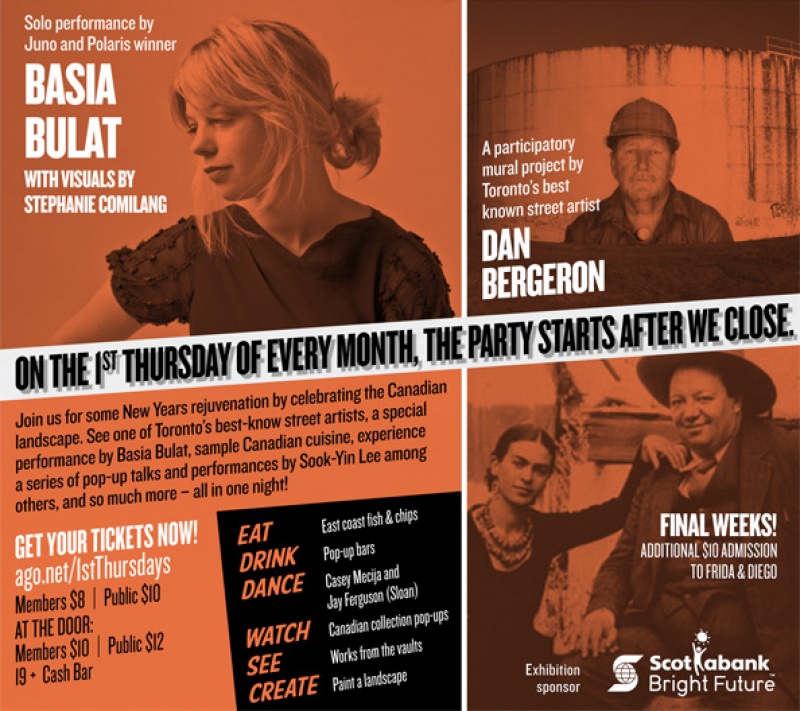 BACK TO THE GARDEN: Reimagining the Canadian Landscape

A one-night-only participatory mural project by Dan Bergeron, one of Toronto’s best-known street artists.
All night long in Gallery 248 on Level 2

$10 admission to Frida & Diego: Passion, Politics and Painting
Buy your tickets at the entrance to the exhibition or buy a combo ticket online in advance

Canadian Collection Pop-ups
8:00 – Pop-Up Talk with AGO Assistant Curator, Canadian Art Georgiana Uhlyarik
8:30 – Pop-Up Response by author and musician Dave Bidini
9:00 – Pop-Up Performance by Toronto artist Sook-Yin Lee in collaboration with Adam Litovitz entitled MORRICE FLED: Two Paintings Talk to Each Other: In 1892, Montreal-born Canadian landscape painter James Wilson Morrice (b. 1865- d.1924) moved to Paris to study. During the First World War he fled to Montreal, then Cuba where he succumbed to alcoholism. The Canadian expat died at the age of 58 in Tunis. In a room at the AGO, Lee observes his oil painting, Morocco Buildings while Litovitz examines Beach of St. Malo. Invariably they collide.

Get your draw on: AGO artist-in-residence Life of a Craphead and Toronto artist Jennifer Rose Sciarrino create their own landscape-inspired still-lifes for you to draw.
All night long in Gallery 128 on Level 1 (Craphead) and Gallery 218 on Level 2 (Sciarrino)

Paint by numbers: Learn how to paint a landscape the way your grandparents did
All night long in Galleria Italia on Level 2

DJs: Hear DJ Masarap on Level 1 from and more tunes from Jay Ferguson (of Sloan) in Galleria Italia on Level 2.
All night long

Out of the Vaults: On view for one night only! From coast-to-coast, real and imagined landscapes touching on themes of migration, exploration, and environmental distress, with works by Tom Thomson, Emily Carr, Kazuo Nakamura, David Blackwood and others.
7–9 pm in the Marvin Gelber Print and Drawing Study Centre 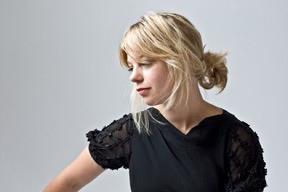 Basia Bulat is a singer-­songwriter and multi-instrumentalist from Toronto who has found acclaim for her exuberant live show, soulful voice and well-­crafted songs. She is finishing her third album to be released in 2013.

Having been nominated for a Juno and short‐listed for Polaris, Bulat has shared the stage with such notable bands as The National, St Vincent, Beirut, Tuneyards, Arcade Fire, Andrew Bird and Patrick Watson. Bulat has toured tirelessly in Canada, USA, Europe, and Australia. She has collaborated with composer Owen Pallett who created arrangements for a selection of her songs that have been performed in symphonic and orchestral concerts with Halifax Symphony Orchestra, Hamilton Philharmonic Orchestra and Kitchener-­Waterloo Symphony.

Earlier this year she was invited by Leonard Cohen to perform one of his songs at Massey Hall on the occasion of his being awarded the Glenn Gould Prize. The evening included such luminaries as Alan Rickman, Adrienne Clarkson, Colm Feore and Michael Ondaatje. The National Post said she "provided an early highlight" to the evening with her performance of If It Be Your Will. 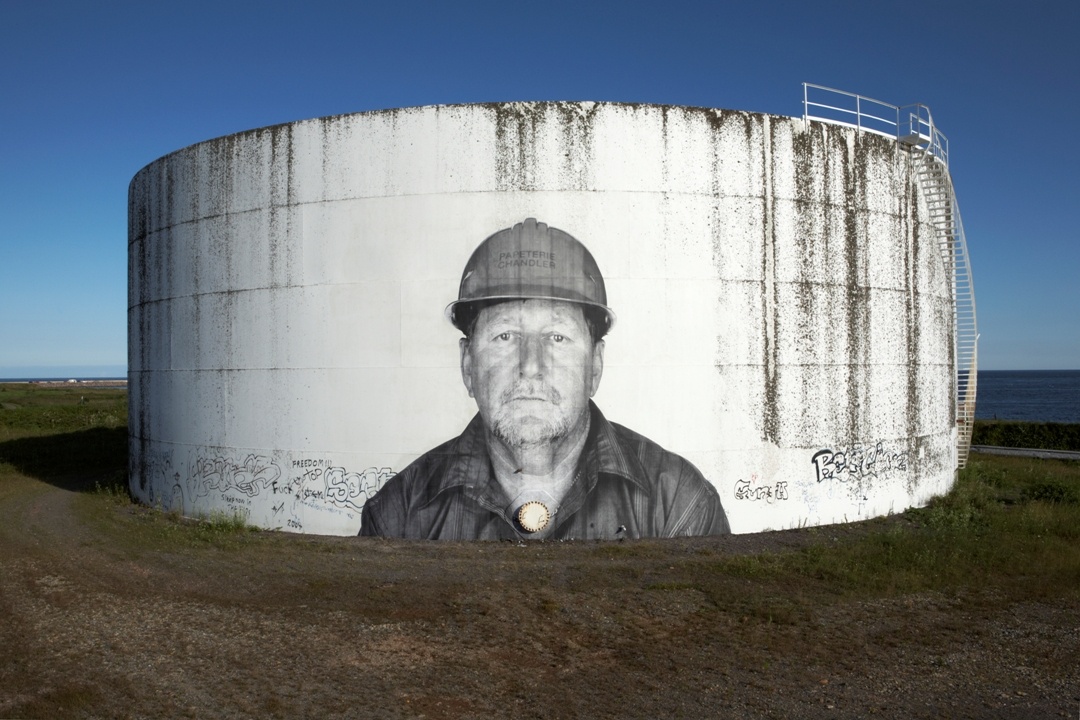 For the better part of a decade, Dan Bergeron has been creating subversive, photo-based street interventions. Bergeron’s work questions the notion of “public” space. It exposes the exclusions embedded in billboard advertising, city architecture and urban geography and reclaims those spaces for the people. Visually and thematically accessible, Bergeron’s inclusionary work documents subjects rarely focused on in mass media, and provokes reflection on identity, social relationships and the spaces that we collectively inhabit.