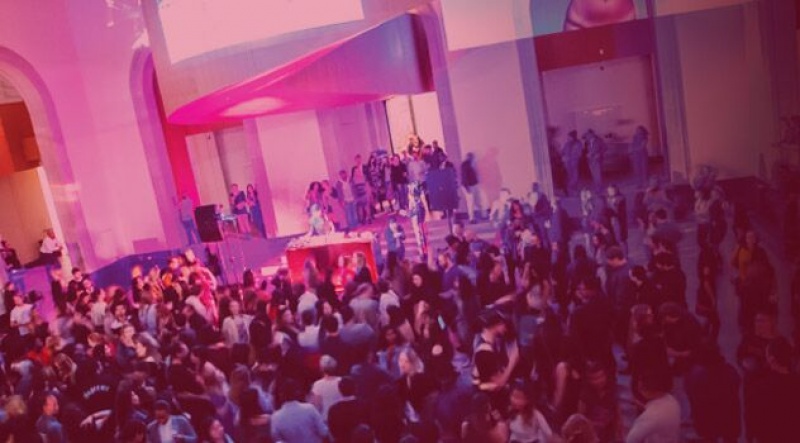 October’s First Thursday is your chance to get an exclusive preview of a selection of the 112 spectacular art projects that will be on offer at Toronto’s Scotiabank Nuit Blanche 2013, the all-night contemporary visual-art event, including Ai Weiwei’s Forever Bicycles, the massive installation set for Nathan Philips Square. Plus, Toronto pop-folk innovator Sandro Perri will headline the event, playing with a full band, and local indie darling Jennifer Castle will kick off the night with a solo performance, with live visuals by Toronto artist Maryanne Casasanta.

This year’s Scotiabank Nuit Blanche is inspired by the ready-made, a form typically associated with artist and provocateur, Marcel Duchamp, who transformed everyday artifacts — including urinals, bicycles and chairs — by placing them in the museum. Be the first to see installations by world-renowned artists who have been inspired by everyday objects, including:

Plus, the AGO’s new artist-in-residence Diane Borsato has commissioned local artist Winnie Truong to illustrate one of her greatest fears as an amateur beekeeper — getting stung in the eyes by bees. This collaborative work is presented in conjunction with Borsato’s Scotiabank Nuit Blanche performance, Your Temper, My Weather, which will involve 100 beekeepers meditating in Walker Court.

In this month's pop-up talks, curators, artists and local personalities will share their experience working with the all night art party that is Scotiabank Nuit Blanche, now in its eighth year in Toronto, including Ami Barak, curator of Exhibition A, To Get Off To A Flying Start. Both Borsato and Adams will be offering a chance for visitors to chat with them directly about their work.

Back by popular demand: Nail Art by Artists! Organized by Magic Pony Gallery and Narwhal Projects and presented by Joe Fresh, lineup to get a one-of-a-kind manicure by one of 10 local artists, including Alexandra Mackenzie, Carly Waito, Crywolf, Diana Lynn Vandermeulen, Eunice Luck, Ginette Lapalme, Melinda Josie, Michael Comeau, Selena Wong and Theo Gallaro. Receive a unique composition on your nails from 7 to 9 p.m.

This month's Out of the Vaults exhibition of prints and drawings is entitled 'Made in Toronto.' Whether by artists from Toronto or artists whose work was inspired by Toronto, the work in this one-night-only display explores this city’s urban culture from the mid-century to the present.

Plus, DJ Iris Fraser-Gudrunas returns with her infamous Gallery DJ installation in Walker Court, and drinks, delicious food, and special surprises will abound as AGO First Thursdays turns one, celebrating a full year of Toronto’s hottest art party. 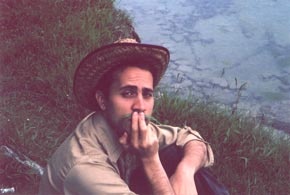 Sandro Perri makes music across a broad spectrum of sound, popular and otherwise. Both instrumental and vocal, dance, noise, drone, ambient, pop, jazz and folk, his music is borne of a curious ear and a love of re-invention. His latest record, Impossible Spaces, is an approach to song and production beyond any of his efforts to date. Pitchfork named it #38 of 2011 and it was recently long listed for the Polaris Music Prize. Dance labels DFA and Phonica each released a 12" of remixes from the album in 2012.

In live performance, both solo and with band he has appeared at Primavera Sound, ATP, MUTEK, Wordless Music Series, MOMA PS/1 Warmup, Suoni Per Il Popolo, Nuit Blanche (playing Erik Satie’s Vexations for solo piano) and various other festivals since 2003. He has also opened for the likes of Philip Glass, Michael Hurley, Destroyer, Andrew Bird, Tortoise, Pan Sonic and Oval. 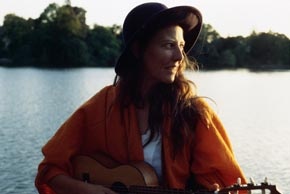 Jennifer Castle is a Canadian songwriter who predominately performs solo. She has released records on Bluefog Records, Flemish Eye, and No Quarter Records. She is currently working on her follow up to 2010's "Castlemusic", due out Spring 2014. Intimate, spare, menacing, psychedelic and beautiful are a few words that have been used to describe her work.  She has collaborated with other musical acts such as Ryan Driver, Doug Paisley, Fucked Up, Wyrd Visions and the Constantines. Also with visual artists Davida Nemeroff, Victoria Cheong, and Mira Dancy.

About Ai Weiwei and Forever Bicycles (2013) 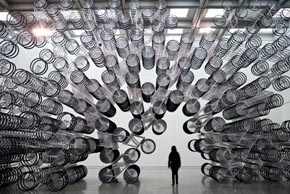 World-renowned Chinese artist and activist Ai Weiwei will exhibit a new edition of his Forever Bicycles sculpture in Toronto's Nathan Phillips Square. Consisting of 3,144 interconnected bicycles, the three-dimensional structure will create an incredible visual effect. Yong Jiu, literally translated as "forever," is the foremost bicycle brand in China; Ai re-interprets such everyday found objects in an abstract and symbolic way. The sheer quantity of bikes and the diverse perceptions of viewing points create a colossal labyrinth-like, visually moving space, which represents the changing social environment in China and around the globe.

Widely considered to be one of the most significant cultural figures of his generation, Ai Weiwei successfully assumes multiple roles, including conceptual artist, architect, curator, designer, film-maker, musician and activist. Using traditional and innovative methods of production, he links the past with the present while exploring the geopolitical, economic and cultural realities affecting the world with humor and compassion. His most recent work appeared in the German pavilion at the Venice Biennale 2013. 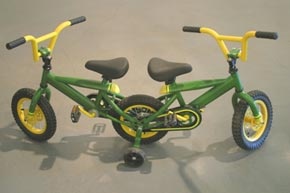 Toaster Work Wagon was originally commissioned by the international InSite Biennial (San Diego, 1997). It is a mobile concession vehicle, a street attraction for adults as well as workshop on wheels (a mutant among other vendors). The wagon features a group of various-sized bicycles that have been modified and made into double-headed pairs. Mounted back-to-back, the audience can test-ride the bikes by negotiating with each other who will take the lead. The vehicle and bicycles function as metaphor for the to-and-fro of human communication and negotiation.

Born in Edmonton in 1951, Kim Adams has been working in sculpture and installation since the late 1970s. Ranging across multiple formats, materials, and scales — from miniature to street level and utopian architectural dimensions — his works commonly involve the combination of found industrial, agricultural and automobile components in mobile assemblages. He has exhibited in major solo and group exhibitions throughout Canada and internationally, and is the recipient of the 2012 Gershon Iskowitz Prize.

About Michel de Broin and Tortoise (2013) 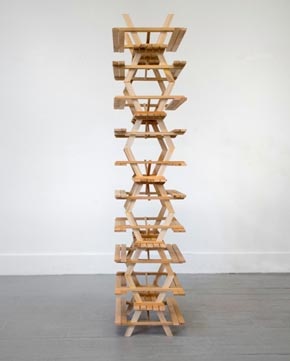 The ancient Roman "tortoise formation" was a siege technique using overlapping shields, giving protection from arrows and boiling oil, and serving as a platform to raise attackers. Inspired by the plated carapace of the land turtle, this military formation was a defensive architecture powered by humans. Tortoise is a series of assemblage sculptures using standard picnic tables — an immediately recognizable representation of North American leisure culture — as building blocks to construct elaborate structures. Supporting one another, showing their undersides and legs in an almost defensive manner against surrounding threats, the picnic tables of the Tortoise series form towering look-out and fort-like structures, defining and guarding their inner space. In this way, this symbol of leisure is turned inside out to create sculptures that resist their essential banality.

Michel de Broin (b.1970 Montréal) has garnered an international reputation for his large-scale space-investing projects such as Majestic (New Orleans, 2011), Revolution (Rennes, 2010), La maîtresse de la Tour Eiffel (Paris, 2009), and Overflow (Scotiabank Nuit Blanche Toronto, 2008). In 2007 he was the recipient of the Sobey Art Award, and he has received grants from the Harpo Foundation (Los Angeles) and the Krasner-Pollock Foundation (New York).

About Reece Terris and Display-Displace (2013) 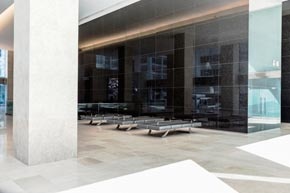 The boulevards that define the financial district are lined with numerous corporate lobbies. The grand scale of the architecture seems to be at odds with the human scale of the furniture and interior design elements but if you pay attention there is a consistency to the style of furnishings and a method to their meticulous arrangement. One communicates the persistent drive of globalized finance and capital, while the other attempts to humanize it, to make it more welcoming and accessible. Public art is often used as a means to mediate between architecture and the people that make use of a space. This suggests an artistic opportunity: to treat the furniture in the lobby as modular elements that can be combined and reconfigured to produce abstract sculptural assemblages. Like the modernist works of art that have come to be identified with corporate lobbies and plazas, these new compositions shift the function of the furniture towards the conventions of public art. The stacking and verticality of the accumulated elements temporarily disrupts the comfortable seating accommodations of the lobby to suggest an idiosyncratic individual subjectivity. The provisional new configuration parallels the upwardly mobile aspirations of globalism.

Reece Terris is a Vancouver-based artist whose work alters the expected experiential qualities of a place or object through an amplification or shift in the primary function of an original design. Past projects include a six-storey apartment building temporarily installed in the rotunda of the Vancouver Art Gallery and a wooden pedestrian bridge connecting two residential homes. He works in a variety of media, including sculpture, performance, installation and photography. 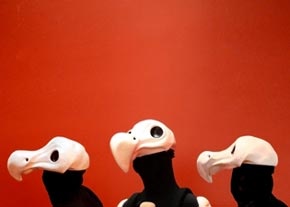 Inspired by traditional mummers parades, A Quack Cure will bring to life a merry troupe of otherwise-extinct creatures for a night of revelry aboard a float designed especially for these strange animals. Dating back to the medieval ages, mummers parades were put on by groups of masked performers traveling through the streets and into houses during holidays and festivals. A performance of some kind would occur at one or more points during theses processions, often telling a story of combat that would result in one of the characters being killed. In these plays a quack doctor would appear just in time, responding to the assailant’s regret at having killed his opponent, and bring the dead character back to life. At this point, with catastrophe avoided, the entire troupe would break into revelry and continue on their happy journey. This project is based on the same lighthearted reversal of consequences. This all-night performance supposes that a “quack cure” has undone, for this festive night, the human-caused extinctions of a small but lively selection of creatures. Unfortunately, quack cures are never quite what they hope to be.

DodoLab is an art and design-based research program, directed by artist Lisa Hirmer, that engages and responds to the public’s relationship with contemporary issues. Using experimental approaches DodoLab emphasizes open participation and exchange in projects that are critical but playful and always highly public. DodoLab has worked with art galleries, museums, universities, municipalities and social service organizations across Canada and internationally. 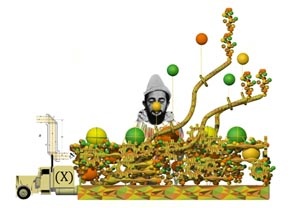 Inflated. Deflated. Clowns and balloons. It is a potent combination. Balloons inflate and cause wonder, deflate and cause despair. But what does it mean if there is no one to suffer the ecstasy of the one or the disappointment of the other? So if there are balloons there must be clowns. (X)Static Clown Factory is a Seuss-inspired enactment of the economy of desire. These are working clowns, the float is their workshop, the parade route their assembly line, and we will experience the night shift. All within a static parade that, of course, makes no “progress” whatsoever. A multi-media construction-come-depot, the float featuring balloons, custom inflatables, flagging tape, tyvek, helium, air, bubbles, and sound and light will be slowly stripped of its balloons throughout the night. Along the parade route, clowns equipped with specialized tools, gadgets and costumes, entertain through social commentary and by awarding clown paraphernalia, prizes, and ‘lantern’ balloons to the lucky and the brave. Depending on the hour you may meet a happy, sad, greedy, goofy or slightly nasty clown. Some onlookers will even be drawn in and ‘clownified’. When the last clown has punched out and the morning shift has arrived, the (X)Static clown factory will fold up shop.

Drawing on her education as a product designer, Ruth Spitzer's multi-disciplinary practice focuses on creating innovative lifestyle concepts, household products and augmented accoutrements-come-devices. Her work has been exhibited internationally. 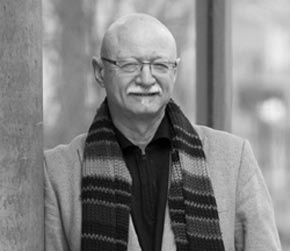 Ami Barak is an independent curator based in Paris, France. He was the Artistic Director of Nuit Blanche Paris 2003 and 2004 editions. He co-curated the Romanian Pavilion at the 54th Venice Biennale, 2011.

Most recent curatorial projects include: Foreigners Everywhere: works from the Pomeranz Collection at the Jewish Museum Vienna (Austria) 2012; Molecular Gastronomy, Young Artists Biennial 5 (Bucharest) 2012; I am also... Douglas Gordon, at the Tel Aviv Museum of Art (Israel) 2013. He is currently a Lecturer at the Paris I Sorbonne University. http://www.performinghistory.ro/ami-barak