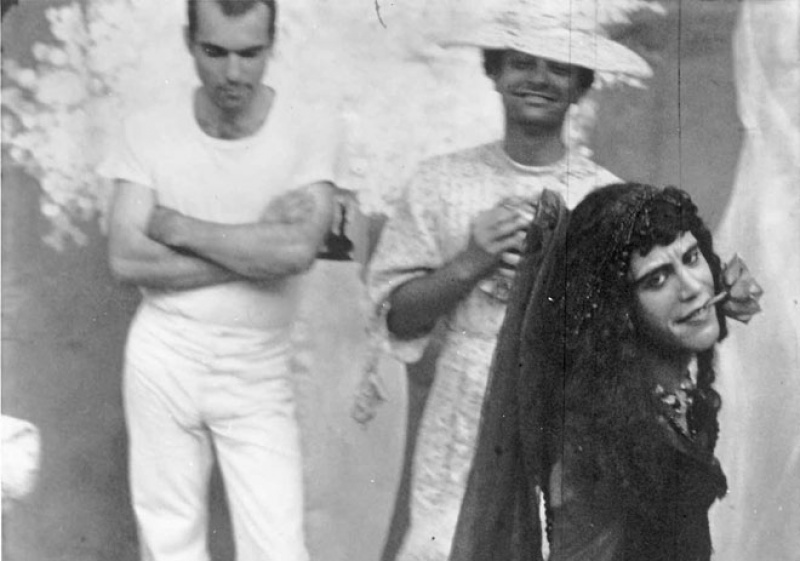 Flaming Creatures
Directed by Jack Smith
Jack Smith described Flaming Creatures as "a comedy set in a haunted music studio" – it remains a staple of queer experimental cinema. Flaming Creatures marked a significant moment in the history of post-war American film and culture. The New York City police seized the film at its premiere in 1963, and it was subsequently banned in 22 states and four countries.  And yet Flaming Creatures was, according to Smith, ultimately meant to be a comedy. On a rooftop above one of New York’s oldest (and now demolished) movie houses, characters disrupt gender and sexual norms as they act out carnal fantasies.
1963, 43 min.

Little Stabs at Happiness
Directed by Ken Jacobs
Jacobs has been called “one of the most extraordinary unknown personalities in the history of American movies” by critic J. Hoberman. Ken Jacobs describes his film this way, “Material was cut in as it came out of the camera, embarrassing moments intact. 100' rolls timed well with music on old 78s. I was interested in immediacy, a sense of ease, and an art where suffering was acknowledged but not trivialized with dramatics. Whimsy was our achievement, as well as breaking out of step.”
1963, 18 min.

Jon Davies is a Canadian curator and writer with a background in queer and film/video studies. He has written for publications such as C Magazine, Canadian Art, Cinema Scope, Criticism, Fillip, and No More Potlucks. In 2009 he wrote a book on Andy Warhol and Paul Morrissey's 1970 film Trash for the Queer Film Classics series. His curated exhibitions include Ryan Trecartin: Any Ever (2010, co-curator) and Coming After (2011–12) for The Power Plant Contemporary Art Gallery, where he was Assistant Curator from 2008–12, and the touring retrospective People Like Us: The Gossip of Colin Campbell (2008–12) for Oakville Galleries, where he was Associate Curator from 2012–15. He recently co-edited issue 5 of Little Joe magazine.