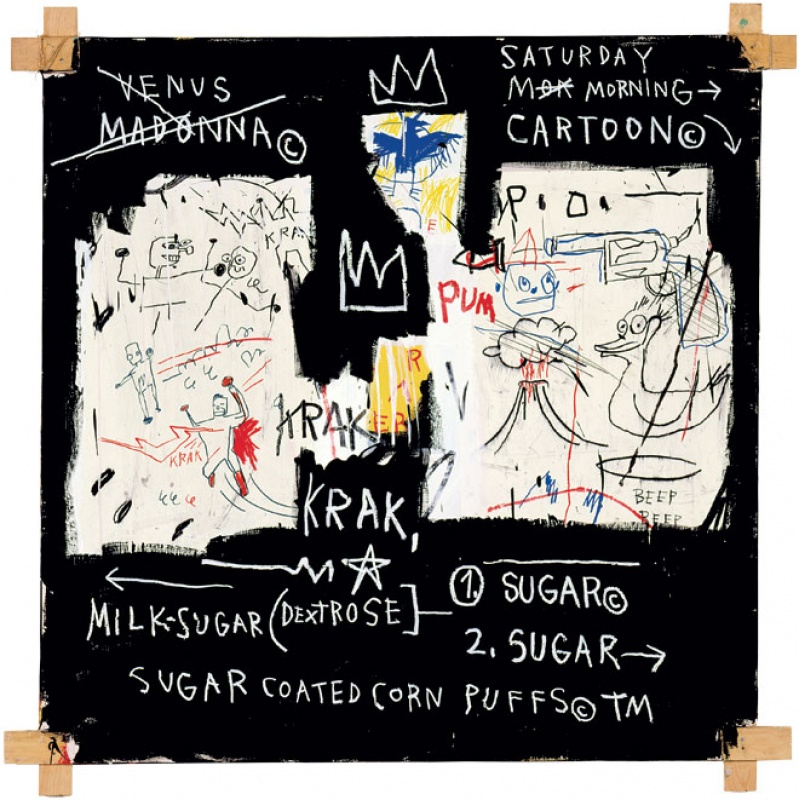 Jean-Michel Basquiat took the New York City art world by storm in the early 1980s and gained international recognition for his powerful and expressive works that confronted issues of racism, identity and social tension. On the occasion of the first major retrospective of the artist's work in Canada, we gathered together artists, writers, historians and other creative thinkers to consider the legacy of Basquiat’s work and its relevance today. How can we extend Basquiat’s groundbreaking artistic approach to confront issues of racism, class struggle, social hypocrisy, while challenging perceptions and opening up new dialogues?

Karen Miranda Augustine is a Canadian visual artist and writer whose works have exhibited in Canada, the United States, Scotland, and Haiti at the 2nd Ghetto Biennale in Port-au-Prince. She has been published and cited in various books and publications, including Caribbean InTransit Arts Journal, The Queer Encyclopedia of the Visual Arts (Cleis Press), The Art of Reflection: Women Artists’ Self-Portraiture in the Twentieth Century (Columbia University Press) and ARC Magazine. Formerly, she was the founding editor of At the Crossroads: A Journal for Women Artists of African Descent (1992–97), editor of MIX: Independent Art & Culture magazine (1999–2000) and CKLN 88.1 FM radio host of BASS: Black Afrikan Sistuhs of Soul (1992-2003). A mixed-media artist, Karen Miranda’s creative projects ride on the confluence of sex, pop culture, spirituality and the underground. She holds an MA in Interdisciplinary Studies from York University and is a contributing author to the forthcoming book Queers Were Here (Biblioasis Press, 2015).

Christian Campbell is a Trinidadian-Bahamian poet, scholar and cultural critic. He studied at Oxford as a Rhodes Scholar and teaches at the University of Toronto. His widely acclaimed first book, Running the Dusk (Peepal Tree Press, 2010), won the Aldeburgh First Collection Prize and was a finalist for the Forward Prize for the Best First Collection, among many other awards. His essay on Jean-Michel Basquiat, “J.M.B.’s Dehistories,” is published in the catalogue for the Art Gallery of Ontario’s exhibit “Jean-Michael Basquiat: Now’s The Time.” He is currently completing a book titled Dehistories: Poetry and Freedom in the Black Diaspora.

Dr. Warren Crichlow teaches in the Faculty of Education, York University, where he primarily directs undergraduate foundations and humanities informed courses in the teacher education program, and graduate courses in cultural and global studies in education. He is co-editor of Race, Identity and Representation in Education (1993, 2005).  His recent publications are: ‘’Its All About Finding The Right Excuse’’ in Joshua Oppenheimer’s The Act Of Killing. Film Quarterly, 67:2 (Winter 2014) and After Genocide: Examining Legacy, Taking Responsibility. Canadian International Council/OpenCanada.Org Online (May 2014). In addition to interests in Baldwin and the enigmatic writer W. G. Sebald, his current research investigates narratology of memory and transitional justice in emergent independent filmmaking in Rwanda.

Born Fred Brathwaite to jazz-loving parents in the Bed Stuy section of Brooklyn, Fab 5 Freddy was one of the first graffiti artists to exhibit internationally. Along with friends Futura 2000, Keith Haring, Jean-Michel Basquiat, and Lee Quinones, Fab was key in getting the art world to realize the importance of New York graffiti. His work was featured in the 1980 Times Square Art Show, where he met filmmaker Charlie Ahearn and developed the first film on hip hop culture, Wild Style, which he also produced, starred in and scored. After numerous solo exhibits and group shows in the 80s, Fab directed music videos for hip hop legend KRS-One, Queen Latifah, Nas, Snoop Doggy Dog and others, and hosted MTV’s YO! MTV Raps, which spread hip hop culture around the world. Fab has written for Vibe, XXL, The New York Times Magazine and served as an executive producer for the VH1 Hip Hop Honors TV specials. His work was recently featured in Los Angeles Museum Of Contemporary Art’s Art In The Streets, a historical survey on graffiti and street art.

Thelma Golden has been the Director and Chief Curator at The Studio Museum in Harlem since 2000. She has organized a number of exhibitions, including ‘Chris Ofili: Afro Muses 1995-2005’, ‘harlemworld: Metropolis as Metaphor’, ‘Black Romantic’ and ‘Isaac Julien: Vagabondia’ among many others. Before her appointment, she was the Special Projects Curator for Peter and Eileen Norton, contemporary art collectors and philanthropists based in Los Angeles, California. Prior to working with the Nortons, Golden was a curator at the Whitney Museum of American Art in New York City. At the Whitney, she was Curator from 1996-1998, Associate Curator and Director of Branch Museums from 1993-1996, and from 1991-1993 she was Director and Exhibition Coordinator at the Whitney Museum at Phillip Morris. At the Whitney Museum, Golden organized many exhibitions including the 1993 Biennial Exhibition (directed by Elisabeth Sussman); ‘Black Male: Representations of Masculinity in Contemporary Art’ (1994-1995) and ‘Bob Thompson: A Retrospective’ (1998) among others. At the Whitney @ Philip Morris, she conceived and organized a site-specific commissioning program and organized 18 projects with artists, including Alison Saar, Glenn Ligon, Gary Simmons, Romare Bearden, Matthew McCaslin, Suzanne McClelland, Y. David Chung, Lorna Simpson, Jacob Lawrence and Leone & MacDonald. Golden teaches and lectures at several institutions internationally including Columbia University, Yale University and the Royal College of Art in London. Golden is also a prolific writer and has contributed essays to publications about Lorna Simpson, Carrie Mae Weems, Bill T. Jones, Kara Walker, and Glenn Ligon.

Dalton Higgins is an author, live music presenter, blogger and multimedia journalist who has written six books that examine the place where the worlds of technology, diversity, and hip hop culture intersect. As a longtime Music Presenter, he’s been to Denmark, France, Australia, Germany, Colombia, England, Spain, Cuba and across the United States, boasting production credits on over 500+ live concert productions. His book Far From Over: The Music and Life of Drake – carried in the Rock n’ Roll Hall of Fame & Museum collection in Cleveland – sheds light on the iconic rapper Drake phenomenon, while his Hip Hop World book - which is carried in Harvard University’s hip hop archive - led to a 2010 Hip Hop Scholar of the Year award nomination courtesy of Washington DC’s WBLINC. He sits on the Toronto Arts Council’s Music Committee and Canada Council for the Arts racial equity advisory committee - @daltonhiggins5

Dana Michel is a choreographer and performer born and raised in Ottawa, and based in Montreal since 2000.  Before entering the BFA in Contemporary Dance program at Concordia University in her late twenties, she was a marketing executive, competitive runner and football player. In 2011, She had the honour of being a danceWEB scholar, allowing her to deepen her research process at the ImPulsTanz International Dance Festival in Vienna, Austria. Michel’s newest solo, Yellow Towel, was featured on the “Top Five” and the “Top Ten” 2013 dance moments in the Voir newspaper (Montreal) and Dance Current Magazine (Canada) respectively.  In 2014, she was awarded the newly created Impulstanz Award in recognition for outstanding artistic accomplishments and was highlighted amongst notable female choreographers of the year by the New York Times. The year concluded with Yellow Towel appearing on the Time Out Magazine (New York City) “Top Ten Performances” list.

Jordana Moore Saggese is Associate Professor of Visual Studies and affiliated faculty in the Graduate Program in Visual and Critical Studies at California College of the Arts. Trained as an art historian, her work focuses on modern and contemporary art with an emphasis on the expressions and theorizations of identity. Saggese's writing has appeared in Exposure: The Journal of the Society for Photographic Education, nka: Journal of Contemporary African Art, and  International Review of African American Art. She has published work online for Artforum, CAA Reviews, The International Review of African-American Art, and most recently Smarthistory. Her essay, "Appropriation in the Age of Mechanical Reproduction," appeared in the catalogue for the international exhibition, Ménage à Trois: Warhol, Basquiat, Clemente (2012). Her first book Reading Basquiat: Exploring Ambivalence in American Art, which reexamines the painting practice of the often-mythologized 1980s art star Jean-Michel Basquiat, was published by the University of California Press in the spring of 2014.

Dagmawi Woubshet, a native of Ethiopia, is associate professor of English at Cornell University. He is author of The Calendar of Loss: Race, Sexuality, and Mourning in the Early Era of AIDS (forthcoming April 2015 from the Johns Hopkins University Press), and co-editor Ethiopia: Literature, Art, and Culture, a special issue of Callaloo 33.1 (2010). His work has also appeared in Transition, Nka: Journal of Contemporary African Art, and African Lives: An Anthology of Memoirs and Autobiographies. He divides his time among Ithaca, New York City, and Addis Ababa.

Contemporary programming at the Art Gallery of Ontario is supported by