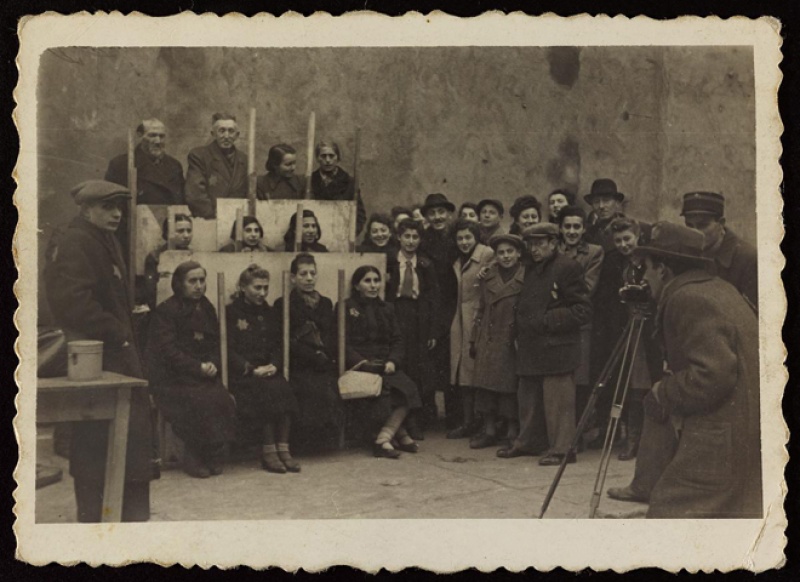 The Lodz ghetto photographs of Henryk Ross are striking for both their historical content and emotional power. Having survived  World War II, his collection reveals an intimacy that remains undiminished today. Join us for a discussion with contributors to the exhibition publication, Bernice Eisenstein, Michael Mitchell, Robert Jan van Pelt, and Eric Beck Rubin.

Eric Beck Rubin is a writer, public speaker and university instructor living in Toronto. His areas of academic specialty are disparate – Memorials and Memory, Architectural History and Theory, 19th and 20th Century Literature, Fin–de–Siècle Vienna, and South Asian and Post–Colonial Studies. The common interest is in the way works of art transmit memory, and what happens when we use fiction as a means of conveying historical truths. Eric completed an Honours BA at the University of Toronto, an MArch at McGill University, and a PhD at Goldsmiths College, University of London, on the representation of the Holocaust in novels by witnesses and non-witnesses. He has lectured on subjects ranging from Freud’s Civilisation and Its Discontents, the use of the Greek art of memory (Mnemotechnics) in the Gothic Cathedral, the novels of Imre Kertész, Memorial Day rituals (and more), at public institutions and on the radio. Over the past decade, he has taught and guest lectured on cultural history and architectural design at the University of Toronto, Waterloo School of Architecture, McGill University and Bergen Arkitekt Skole, Norway. His more recent courses, at the Daniels Faculty of Architecture, have to do with studying monuments and memorials to traumatic historical events to learn what is gained and lost when fluid and contentious histories are turned into built work.

Dr. Robert Jan van Pelt is one of the world’s leading experts on Auschwitz. He co-authored the award winning book, Auschwitz 1270 to the Present, with Dr. Debórah Dwork, and initiated and chaired the workgroup that created the master plan for the future of the Auschwitz museum. He appeared in Errol Morris’s recent movie, Mr. Death: The Rise and Fall of Fred A. Leuchter Jr. and the PBS documentary, Nazi Designers of Death.  Dr. Van Pelt was one of the four internationally renowned historians who served as expert witnesses for the defense in the Irving-Lipstadt trial.  Van Pelt received his Ph.D from the University of Leyden, The Netherlands.  His original work is in the history of ideas and architectural history.  His interest in the biographies of the architects of Auschwitz led him to study the history of the camp, which, in turn, brought him in touch with Holocaust denial.  He is the author of seven books (two of which he co-authored with Dr. Debórah Dwork), has contributed chapters to an additional twenty books, and has published more than thirty articles.  He is the recipient of various honors, including a Guggenheim Fellowship.  Dr. van Pelt holds the rank of University Professor and teaches at the School of Architecture of the University of Waterloo in Canada.  He speaks regularly on topics concerning the Holocaust in general, the history of Auschwitz and the possible future of that site, and Holocaust denial. He lives in Toronto.

Michael Mitchell worked several years as an archaeologist in the Mexican states of Oaxaca and Chiapas,  following his completion of a masters degree in anthropology at the University of Toronto,  He subsequently returned to Canada to study film and photography at Ryerson University, graduating in 1972. Since then he has worked as an award-winning freelance photographer, writer and documentary filmmaker in many parts of the world. His work has appeared in a variety of national magazines including Weekend, Today, Saturday Night, This Magazine, Maclean's, Readers Digest, Descant and Canadian Art. He has also written commemorative books for Canada Post Corporation and several exhibition catalogues for the Art Gallery of Ontario. Mitchell's personal photographic work has been exhibited in numerous North American and European museums and galleries and is in the permanent collections of the Swedish Museum of Modern Art, the National Gallery of Canada, the Portrait Gallery of Canada, and the Art Gallery of Ontario. Since 2000 he has concentrated on film and book projects.