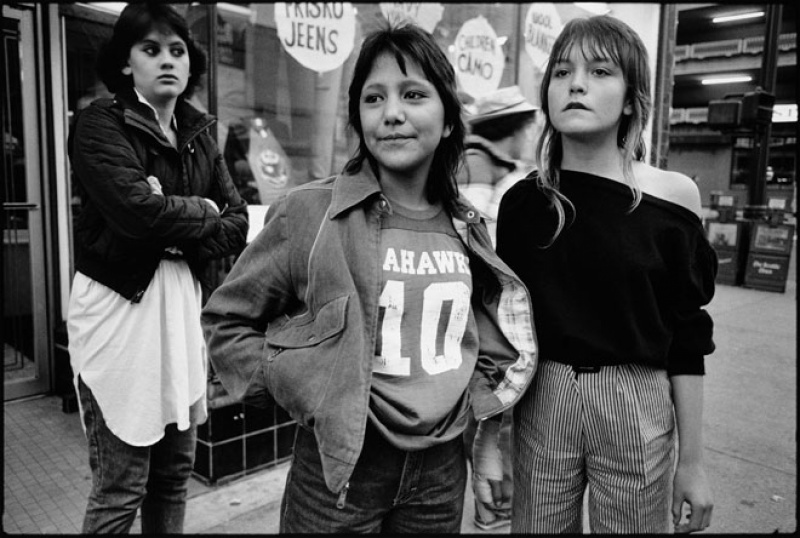 Developed from the Life magazine story “Streets of the Lost,” photographed by Mary Ellen Mark and written by Cheryl McCall, Bell’s documentary chronicles the harrowing  lives of Seattle’s homeless street children. Streetwise film employs the observational mode of direct cinema, following kids Lulu, Rat, Dewayne and Tiny as they hang out, scrap, hustle, and muse about their lives.
1984, 91 min. Streetwise courtesy of the Reserve Film and Video Collection of The New York Public Library for the Performing Arts.

Secrets From the Street: No Disclosure
Directed by Martha Rosler
"A look at the intersection of cultures and classes in the street life of San Francisco's Mission District, whose stores and restaurants, and the flamboyant Low Rider car culture, attract tourists. This video done for an exhibition held jointly at San Francisco's City Hall and its Museum of Modern Art, argues that accounts of cultural life which omit the question of social power are mythical: The real secret is the obscured relations of economic and political domination." - Martha Rosler
1980, 12 min.

“Streetwise is a late classic in cinema verité that insightfully reveals a harsh place and time too easily ignored by those outside it.” —Criterion

“… a staggering, if subtle, cinematic achievement, a poetic, attentive piece of filmmaking that hustles as hard as its characters, mirroring their grimy, tragically gorgeous aesthetic.” —Robert Greene, Nonfics

Sophie Hackett is the Associate Curator, Photography, at the Art Gallery of Ontario and adjunct faculty in Ryerson University’s master’s program in Film and Photographic Preservation and Collections Management. She has contributed to several Canadian art magazines, international journals and monographs, and she has curated or co-curated several exhibitions and public projects at the AGO, including Barbara Kruger: Untitled (It) (2010); Songs of the Future: Canadian Industrial Photographs, 1858 to Today (2011); Max Dean: Album, A Public Project (2012); Light My Fire: Some Propositions about Portraits and Photography (2013-2014); What It Means To be Seen: Photography and Queer Visibility and Fan the Flames: Queer Positions in Photography (2014); and most recently Introducing Suzy Lake (2014). Hackett was the lead juror for the 2014 AIMIA | AGO Photography Prize, a role she also held in 2010 and 2012. She is the curator of Thomas Ruff: Object Relations and co-curator of Outsiders: American Photography and Film, 1950s–1980s, both of which will open at the AGO in spring 2016.