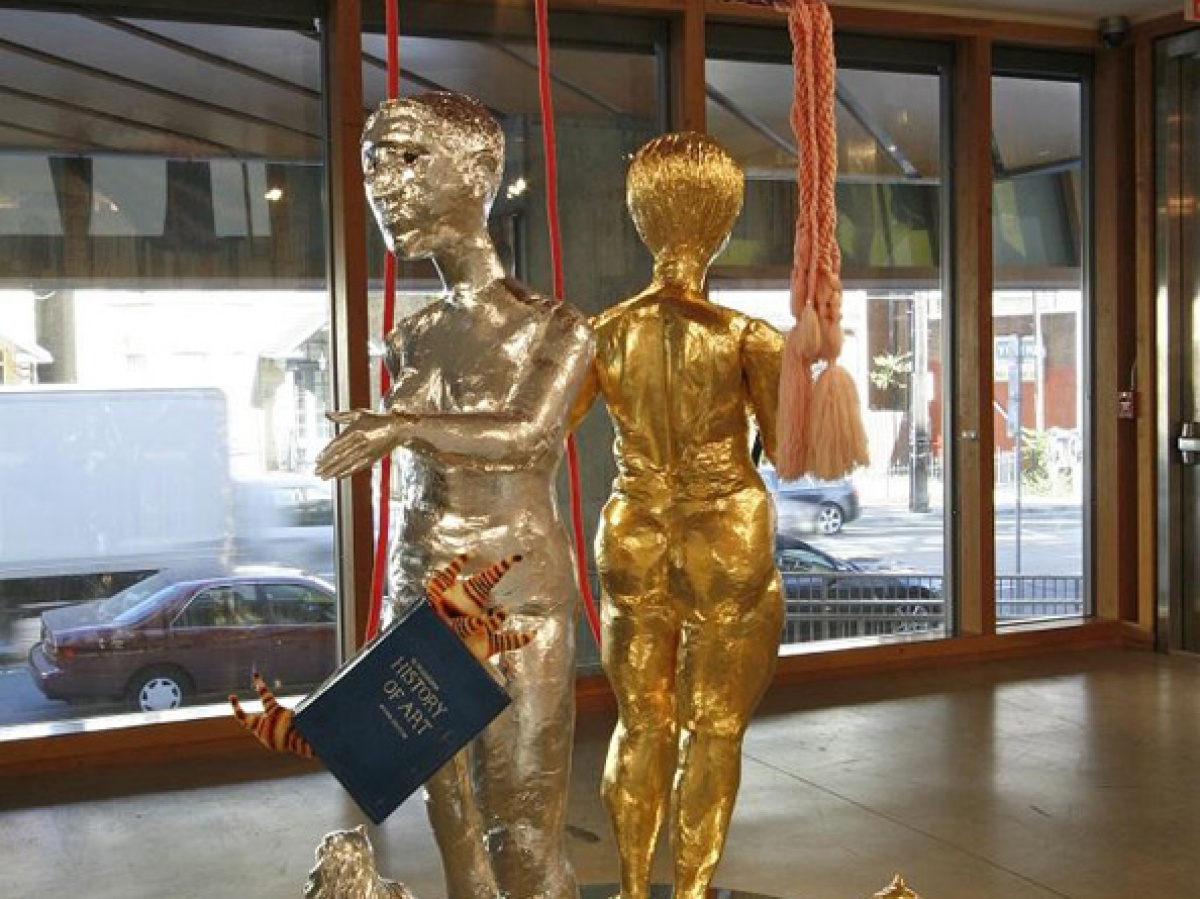 Allyson Mitchell: A girl's journey to the well of forbidden knowledge

Allyson Mitchell: A girl's journey to the well of forbidden knowledge

While living in New York City earlier this year, Allyson Mitchell spent time at the Lesbian Herstory Archives in Brooklyn. Her experiences there prompted mixed responses. The extent of the Archives’ holdings was inspiring and overwhelming, yet she found it troubling to see how hard women have had to work to collect and preserve their “herstory.”

A girl’s journey to the well of forbidden knowledge transforms the gallery space into a lesbian feminist library. One wall is lined with reproductions of drawings that Mitchell made to document and honour the books in the Archives’ holdings, the same books that have inspired her own visual arts practice. Her laborious renderings pay homage not only to the Lesbian Herstory Archives, but to all feminist presses, bookstores and libraries that have worked valiantly to advocate for the significance of women’s stories, histories and acts of resistance, often in the face of sexism, homophobia and financial constraints. Mitchell’s drawings also function as a memorial to the disappearing history of material texts that connect queer communities: as the printed page is increasingly threatened by the progression of digital publishing, more women’s publishers and book retailers are becoming extinct. Essential meeting places for lesbians, and for all women, are lost.

The sculptural figures – imposing in size, humorous in disposition, and completely exposed in their nudity – are made from papier mâché worked over store-bought mannequins. These figures are the archivists, the librarians, the students, the readers. They are arresting in their stature and state of undress, yet they are also whimsical and more than a little vulnerable. They join their countless naked sisters who already inhabit the AGO, their exaggerated genitalia serving to make the private public and questioning idealized depictions of nude and near naked women that have become the norm. They stand tall on a mirror as a new way to reflect femininity while they burn copies of Janson’s History of Art in defiance of the canon that would render them invisible.

Toronto-based Allyson Mitchell is a self-described “maximalist” artist who has gained international acclaim for her humorous yet uncompromising work, which explores feminist issues through a range of media including installation, film and sculpture. Using reclaimed textiles and cast-off crafts as her primary materials, she combines feminism and pop culture to play with contemporary ideas about sexuality, autobiography and the body. Her work has been exhibited in galleries and festivals across Canada, the US, Europe and Asia. She has also performed extensively with Pretty Porky and Pissed Off, a fat performance troupe, and has published both writing and music. She is an assistant professor in the School of Women’s Studies at York University in Toronto. Mitchell is represented by Katharine Mulherin Contemporary Art Projects.