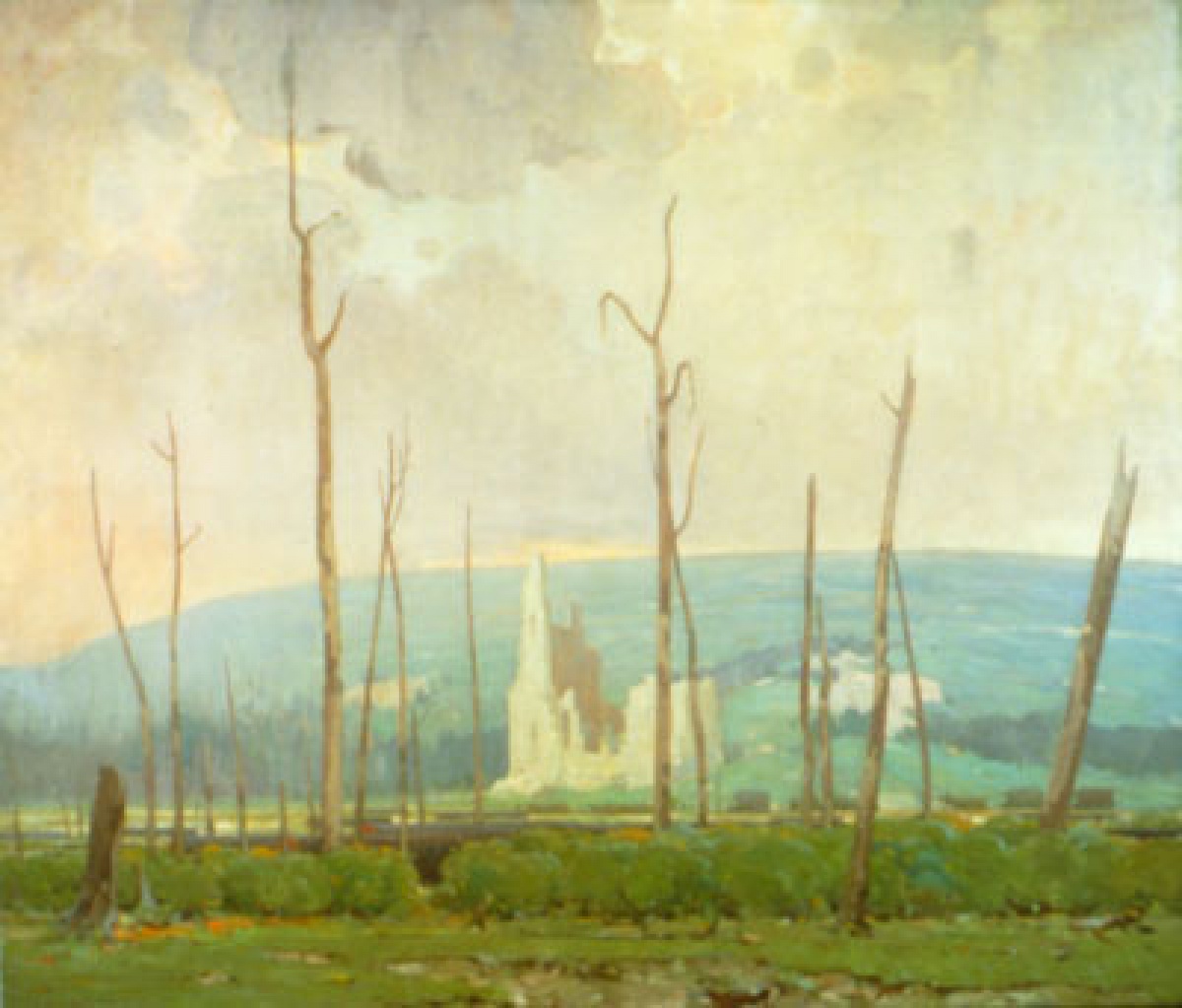 Often forgotten in conflict is the war artist. During the First and Second World Wars, Canadian war artists were courageous journalists who lived the lives of soldiers, with only pen and ink for protection. Their provocative expressions of life in wartime will be on display at the Art Gallery of Ontario from October 12, 2001 to January 6, 2002, in an interactive exhibition encouraging understanding and remembrance. The war artists, including A.Y. Jackson and Arthur Lismer in World War I, and Alex Colville, Molly Lamb Boback and Jack Shadbolt in World War II, sent home a stunning visual record of Canada's war experiences. Canvas of War: Masterpieces from the Canadian War Museum is the first major exhibition of Canadian war art of both world wars.

"The war art commissions brought intense focus to the observation of Canada's role in international conflict," says Anna Hudson, assistant curator of Canadian Art at the AGO. "A driving need for a strong national identity urged First and Second World War artists toward symbolism. While these vivid images are of a now distant past, they continue to communicate their messages to us, and so never lose their relevance."

Matthew Teitelbaum, director of the AGO, agrees that all art is contemporary. "While a work may have been painted 50, 100 or 500 years previously, it still speaks to us in our setting. We at the AGO recognize this voice that art has, and strive to display works, both in our collection and in borrowed exhibitions, in a way that promotes dialogue and gives pause for reflection."

The First World War images of battle, hospital corps, heroic portraits and gathering soldiers take the visitor through the confused emotions of life in wartime. For Fred Varley and Arthur Lismer, founding members of the Group of Seven, the ravaged landscape of Europe spoke volumes of the war's spiritual toll.

During World War II, art - painting, sculpture, architecture and design - rose to the forefront of Allied and Axis countries' demonstrations of cultural strength on the international stage. Canadian artists embraced the role of "cultural soldier," but rejected the aggressive message of political propaganda.

The AGO presentation of Canvas of War will feature a debriefing area, designed as a meeting place for visitors and veterans to share stories and to reflect on diverse experiences of war and conflict. Paintings of the Canadian War Memorials of the First World War and Canadian War Records of the Second World War are represented in the selection of 68 works from the 13,000 pieces in Canada's war art collection.

Generous support for the AGO education programs provided by the

The travelling exhibition is produced by the

Canadian War Museum and the Canadian Museum of Civilization

the Canadian Museum of Civilization

History Television is proud to be a promotional partner for this exhibition.
For more information on History of War Thursdays visit http://www.history.ca/

The AGO is proud to celebrate its centennial year, beginning September, 2001. The Art Gallery of Ontario's collection comprises more than 25,000 works representing 1,000 years of extraordinary European, Canadian, modern, Inuit and contemporary art. This important collection, along with the Gallery's preeminence in art education programs, makes the AGO one of Canada's most significant public resources for the advancement of the visual arts in Canada.