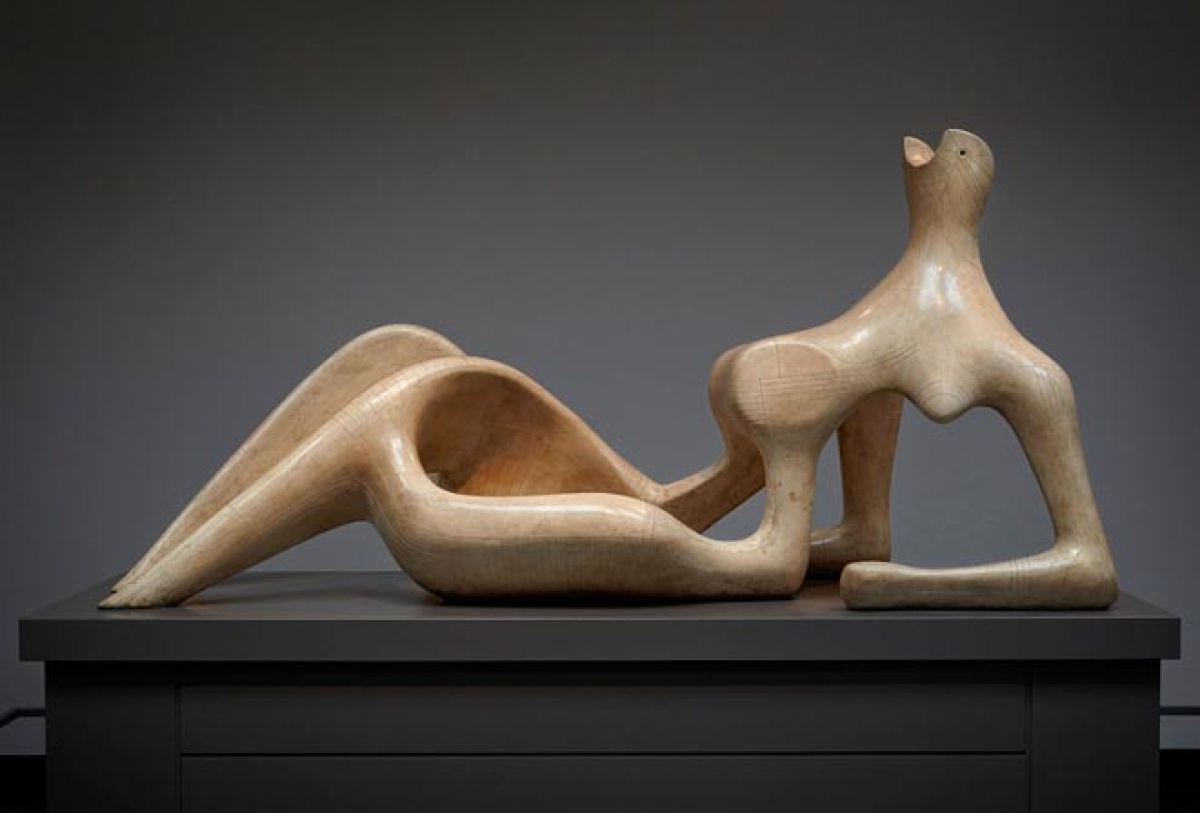 In Francis Bacon and Henry Moore: Terror and Beauty, the Art Gallery of Ontario brings together two giants of 20th-century British art in a major exhibition that features more than 130 artworks, including paintings, sculptures, drawings, photographs and archival materials.

Francis Bacon and Henry Moore: Terror and Beauty draws on the artists’ experiences during times of conflict and violence, including the London Blitz of the Second World War, to examine how confinement and angst fostered their extraordinary creativity and unique visions. It also demonstrates how the two artists reflected differently upon torment.

Curated for the AGO by Dan Adler, associate professor of art history at York University, Francis Bacon and Henry Moore: Terror and Beauty is the first Canadian exhibition of Bacon’s work and includes rarely seen Moore pieces, from both the AGO collection and elsewhere. Moore’s works are a cornerstone of the AGO collection, and pairing them with those by Francis Bacon sets them in a new light. The exhibition also presents more than 30 archival photographs by acclaimed German-born British photographer Bill Brandt. Loans for the exhibition have also been secured from several institutions, including MoMA, Tate Britain and the Museum of Contemporary Art, Chicago.

The exhibition was originally curated by Richard Calvocoressi CBE, Director of the Henry Moore Foundation and Martin Harrison, editor of the catalogue raisonné on Francis Bacon.

Organized by the Art Gallery of Ontario in collaboration with the Ashmolean Museum, University of Oxford. This exhibition was made possible through the generosity of The Henry Moore Foundation and The Estate of Francis Bacon.

You can’t be more horrific than life itself. - Francis Bacon

If I were psychoanalyzed, I might stop being a sculptor. - Henry Moore

Although they were neither friends nor collaborators, painter Francis Bacon (1909-1992) and sculptor Henry Moore (1898-1986) were contemporaries who shared an obsession with expressing themes of suffering, struggle and survival in relation to the human body. Both artists were focused, in different ways, on representing the body in various states of contortion, which reflected their experiences of conflict and violence. Drawing on the artists' own personal experiences and references, including the London Blitz, the exhibition examines how confinement and angst fostered their extraordinary creativity and unique visions.

Bacon, known as a tortured soul with sado-masochistic tendencies, embraced his passions and despairs. His work portrays the body as disfigured and deconstructed, often in states of confinement. However, he did not see his paintings as horrific but as life-affirming: “I deform and dislocate people into appearance; or hope to.”

Moore, a British war artist, was internationally renowned for his large-scale, semi-abstract bronzes. His sculptures evoke endurance and stability but, when considered in the light of his wartime experiences, they read as an effort to rebuild and redeem the fragile human psyche and body.

“I’ll tell you how I think of my own work: it unlocks the valves of sensation” - Francis Bacon

Francis Bacon's and Henry Moore's work not only made them stars during their lifetimes but up to today continues to inspire artists who work in a variety of mediums. Below, learn about and hear from creative individuals influenced by Bacon and Moore.

Gormley to Hirst: today's top artists on the genius of Henry Moore [theguardian.com]

"I often think about Francis Bacon when I look at Moore. It must be something to do with his ability to create complete visions of humanity through shapes that barely relate to anatomy. It is truth but a different reality. Bacon paints with his guts in the same way as Moore carves with a visceral instinct."
Damien Hirst

The Violent History of Kent Monkman
Images referencing works by both Francis Bacon and Henry Moore have appeared in the Canadian artist's recent paintings.

The self-guided audio tour for Francis Bacon and Henry Moore: Terror and Beauty shares perspectives on select key works and themes from the exhibition. The tour includes 18 stops and insights about the work from five experts from different fields .

Dan Adler is Associate Professor of Art History at York University in Toronto and guest curator of the exhibition. Dan talks about the art historical relevance of the art and the genesis of specific pieces.

Mark Kingwell is Professor of Philosophy at the University of Toronto. Mark talks about the spirit of the time during which Bacon and Moore lived – the effect of World War II – the first war to involve civilians. He addresses the mid 20th century philosophical, spiritual and political views in Britain and the changing attitudes to sexual preference in post war British culture.

Allan Peterkin is Associate Professor of Psychiatry at the University of Toronto, Head of the Program in Health, Arts, and Humanities. Allan talks about the modern and postmodern experience of trauma and analyses particular works from a psychological perspective.

Margaret Priest is a Toronto artist who was born during the Second World War and lived in London where she knew both Bacon and Moore.

Simon Starling is a British artist whose work is inspired by Henry Moore. His Infestation Piece: Musseled Moore is based on Moore’s Warrior with Shield, which is part of this exhibition.

Ways to listen to this audio tour on your next visit

Download the full audio tour on your mobile device - FREE

Download the free AGO Mobile App to your iPhone, iPod touch, iPad or Android smartphone or, if you already have the app, update it to get the tour. (Downloading this content will require a wifi connection or a data plan. Some charges may apply; consult your mobile provider.) Bring headphones to use with your mobile device on the day of your visit to ensure the best experience.

Purchase the audio tour with your ticket

Rent an audio wand for $4 ($3 for members) when you purchase your ticket.

“My painting is not violent; its life itself that is violent.”
Francis Bacon

“...Everything in the world of form is understood through our own bodies.”
Henry Moore

Francis Bacon and Henry Moore lived in Britain at a time of intense political and social turmoil that included two world wars. The artists – regarded as two of the greatest artists of the 20th century – had very different personalities and approaches to making art, yet both expressed their experiences of conflict and trauma through lifelong explorations of the human figure. While Bacon’s images tend towards the more autobiographical and Moore’s works consistently embrace universal themes, there are some striking similarities in their work. Both distort, contort, tear apart and reassemble the body to capture the disturbing realities of 20th-century existence. In Francis Bacon and Henry Moore: Terror and Beauty, the artists’ works are paired to create a dialogue showing their shared awareness of human suffering and mortality that is also a testament to human strength and resilience.

The exhibition explores the following themes:

Blitz: The Time and the Place

The German Blitz on England from September 1940 to May 1941 killed thousands of civilians and demolished much of the city of London, where Francis Bacon and Henry Moore lived. Approximately 100,000 people fled to the Underground stations for refuge from nightly air raids. Moore’s studio was bombed, and for a while the portable art form of drawing became his primary medium. As an official war artist, he drew Londoners huddled together in the stations deep underground, referring to them as “hundreds of Henry Moore reclining figures stretched along the platform.” The photographer Bill Brandt also lived in London at that time. Specializing in night scenes, he took evocative moonlit photographs of London in eerie darkness during the blackouts, showing buildings in ruin and people crowding into improvised shelters.

Bodies: The Distorted and the Disturbed
Bacon and Moore distorted the human form to express the violent realities and anxieties of the 20th century. The trauma of war, a new interest in psychoanalysis and shifts in religious and philosophical beliefs shaped the environment in which they lived and created the backdrop for their art. Their subjects – sometimes mythical, often monstrous – are contorted, weathered, battered or suffering. Bacon wanted to provoke viewers by attacking their nervous system, stirring up emotions and forcing them to confront reality. The voids, scars, sockets and gouges in Moore’s dismembered bodies seem to allude to enduring hardships and suffering.

Crucifixions
Although Bacon and Moore were not religious, they both used Christian themes in their art. Living in an increasingly secular, horror-and-violence-conscious age, Bacon described himself as a militant atheist and nihilist who saw little purpose in existence. Moore was a humanist who valued human dignity and felt that people could lead meaningful and ethical lives without a belief in the supernatural. Both artists, however, made images of the Crucifixion as a universal symbol of suffering and evidence of people’s capacity to inflict harm on others. Bacon referred to the Crucifixion as “a magnificent armature on which you can hang all types of feeling and sensation.”

Popes
Bacon became obsessed with a portrait of Pope Innocent X made by Spanish painter Diego Velázquez in the 1600s, although he never saw the painting in person. Instead Bacon worked on a long series of pope paintings over 14 years, referencing his large collection of reproductions of the Velázquez painting in books, catalogues and postcards. Themes of screaming and confinement run through Bacon’s series. His popes are haunted, trapped and angry and have little connection to religion other than to possibly subvert the power of the church. As Bacon once said: “It comes from an obsession with the photograph that I know of Velázquez’s Pope Innocent X…because I think it is one of the greatest portraits that has ever been made… I buy book after book with this illustration in it of the Velázquez Pope because it just haunts me, and it opens up all sorts of feelings and…imagination.”

Hybrids
Bacon and Moore created animal-human hybrids that were influenced by Surrealism, a 20th-century movement in art and literature that drew on the creative potential of the unconscious mind. The tiny head of the child in Moore’s Maquette for Mother and Child, for example, appears to be ferociously attacking its mother’s breast like a bird of prey. Moore has said that most of his mother and child sculptures have had the larger form in a protective relationship with the smaller form, but “it isn’t always so with very young children or animals… I wanted this to seem as though the child was trying to devour its parent – as though the mother had to hold the child at arm’s length.” In Bacon’s paintings, such as Man Kneeling in Grass, humans often display the urges and assume the appearance of animals.

Vulnerability and Resilience
The sense of elation that followed the end of the Second World War soon gave way to angst after revelations of the full horror of the Holocaust and the new threat of the atomic bomb. Although Bacon’s paintings offer a more private and personal view of reality, his defenceless and exposed human figures still reflect the traumas of the time. During the post-war period, Moore created numerous warrior figures, infusing their forms with undertones of anxiety and vulnerability as well as aggression. Moore’s warriors are anti-heroes, heroes that strive and fail, yet he gives them dignity through their monumental size and stature.

Francis Bacon and Henry Moore: Terror and Beauty at the AGO features more than 30 archival photographs by the acclaimed German-born British photographer Bill Brandt, including many views of London during the Second World War, as well as portraits of Bacon and Moore. Brandt, a resident of London, specialized in night scenes and captured evocative moonlit views of London in eerie darkness during the Blitz and its blackouts, showing buildings in ruin and people crowding into improvised shelters.