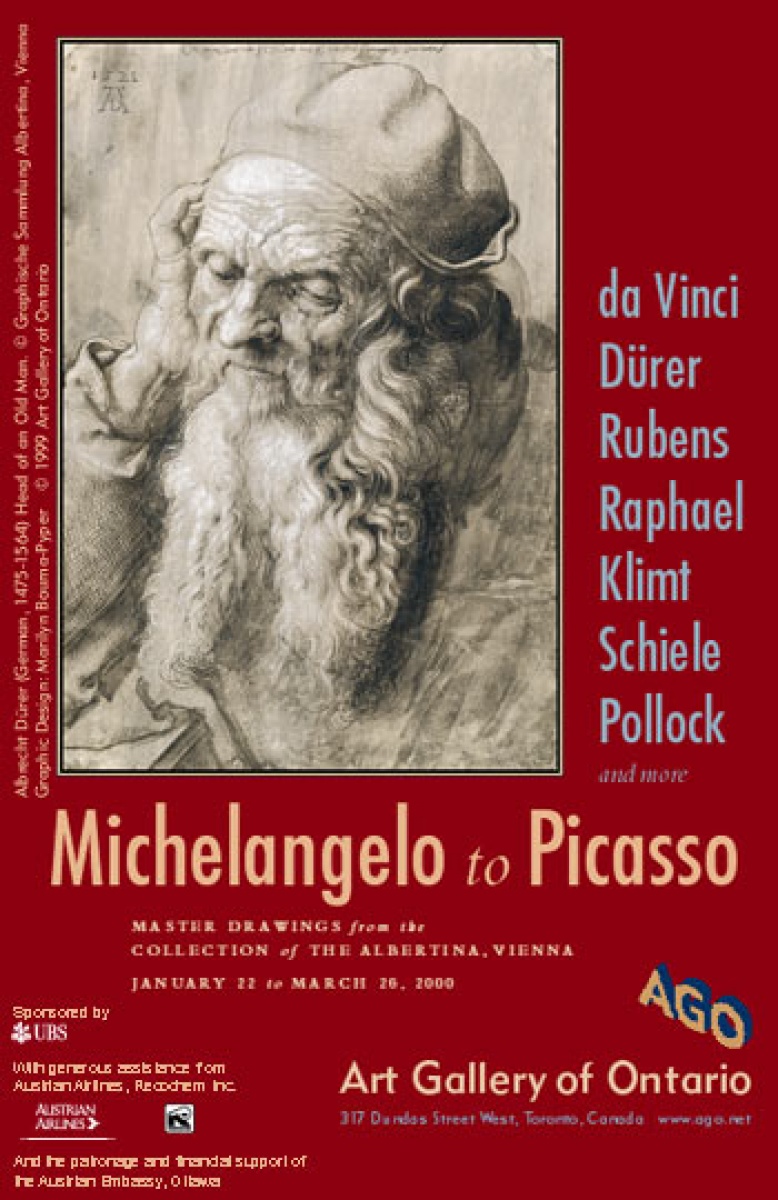 Michelangelo to Picasso: Master Drawings from the Collection of the Albertina, Vienna

In 1521 Dürer visited the Netherlands, where he made this celebrated drawing. While it is a finished portrait in its own right, it was also used as a study for a painting of St. Jerome, Dürer's most important work from the trip. The artist's inscription at the top reads: "This man was 93 years old and still healthy and strong in Antwerp." In keeping with the focus on realistic depiction in northern Europe, Dürer observed the old man closely and recorded the details of his face brilliantly.

From Michelangelo to Picasso: Great Master Drawings from the Collection of the Albertina, Vienna is a spectacular exhibition of 45 stellar drawings from the Albertina museum in Vienna. The exhibition features works by some of the greatest artists in the history of art - Michelangelo, Raphael, Leonardo da Vinci, Durer, Poussin, Rubens, Rembrandt, Tiepolo, Klimt, Schiele, Klee, Kandinsky, Cezanne and Van Gogh.

The selection of drawings in this exhibition demonstrates the breadth and strength of the Albertina’s holdings. The exhibition will provide a comprehensive overview of 550 years of European master drawings (1420-1988) from Germany, Italy, the Netherlands, Flanders, Austria and France. Highlights include Leonardo’s Figure of an Apostle, Michelangelo’s Studies for Two Arms and Seated Male Nude, Durer’s Head of an Old Man, Rembrandt’s Farm Houses under a Stormy Sky, and Picasso’s Head of a Woman.

The Albertina has one of the greatest collections of drawings in Europe. It seldom, if ever, sends groups of drawings from its collection abroad. The Art Gallery of Ontario in Toronto and the Frick Gallery in New York are the sole venues for this exhibition, and as such offer North Americans a rare opportunity to see some of the treasures from this collection.

Michelangelo is one the most influential artists in the history of Western art. A sculptor, painter, architect, draftsman and poet, he is best known for the colossal Sistine Chapel ceiling (1508-15), as well as his heroic male nudes, such as the marble statue of David (1501-04). His long life was enhanced by his ardent faith and his search for God, whose sublime purpose he saw revealed in the beauty of the human form, that "mortal veil," as he put it, of divine intention.

Italian painter, draftsman, sculptor, architect, musician, author and engineer, Leonardo da Vinci was also an investigator in the field of aerodynamics, and the leading physicist, botanist, anatomist, geologist and geographer of his time. His genius, perhaps more than that of any figure, epitomizes the humanist ideal of the "Renaissance man." His Last Supper (1495-97) and Mona Lisa (1503-06) are among the most widely popular and influential paintings of the Renaissance.

Because of the breadth of his knowledge and the universality of his achievements, Dürer is often characterized as a German Leonardo da Vinci. His large body of work includes altarpieces and religious works, numerous portraits, self-portraits and woodcuts. In 1498 he painted one of the earliest known independent self-portraits. His greatest and most enduring works were always in the realm of graphic art, which, in the manner of many ventures intended for the buyer of modest means, eventually made him rich.

A Flemish painter who explored the dynamism, vitality and sensuousness of the Baroque period, Rubens exercised in Flanders a stylistic authority at least as great as that of Michelangelo in Central Italy a century before. He spoke and wrote six modern languages, including Italian and Latin. He evolved a personal style characterized by abundant physical energy and splendid colour. Though his masterpieces include portraits and landscapes, Rubens is perhaps best known for his religious and mythological compositions.

Dutch painter, draftsman and etcher of the 17th century, Rembrandt is a giant in the history of art. Many of his paintings are characterized by expressive brushwork, rich colour and a mastery of chiaroscuro, a lighting technique designed to create drama and mystery. Rembrandt's biblical scenes and self-portraits were atypical of Dutch pictures of the 17th century; his contemporaries preferred to paint landscapes, still lifes, or scenes of daily life. He is also well known for his outstanding innovations in the relatively undeveloped medium of etching.

Austrian muralist Klimt founded the Vienna Sezession, a group of painters who revolted against academic art in favour of a decorative style similar to Art Nouveau. He painted three allegorical murals for the ceiling of the University of Vienna auditorium that were violently criticized and rejected because of their erotic symbolism and pessimism. Klimt's most popular works include The Kiss (1908) and a series of portraits he did of fashionable Viennese matrons. In these works he treats the human figure without shadow and heightens the lush sensuality of skin by surrounding it with areas of flat, highly ornamental areas of decoration.

Austrian Expressionist painter, draftsman and printmaker, Schiele was noted for the blatant eroticism of his figurative works. He was strongly influenced by Gustav Klimt, and the linearity and subtlety of Schiele's work owe much to Klimt's decorative elegance. Schiele emphasized expression over decoration, heightening the emotive power of line with an angst-ridden, feverish tension. He concentrated on the human figure, and his candid, agitated treatment of sexual themes caused a sensation before his death at age 28.

The High Renaissance ideal of harmony comes to its most complete expression in the art of Raphael, master painter and architect. Harmony was the basic purpose of any of Raphael’s compositions. His work is admired for its clarity of form and composition, and for its visual achievement of the ideal of human grandeur. He is best known for his Madonnas and for his large figure compositions in the Vatican in Rome.

Devoutly Jewish, Chagall was a Belorussian-born French painter, printmaker and designer whose works combine images from personal experience with formal symbolic and aesthetic elements. Chagall drew from his own treasury of Russian and Jewish folklore and created a personal mythology of childlike directness and intimacy. Preceding Surrealism, his early works, such as I and the Village (1911), were among the first expressions of psychic reality in modern art. His works in various media include sets for plays and ballets, etchings illustrating the Bible and stained glass windows.

American painter and commanding figure of the Abstract Expressionist movement, Pollock painted in a completely abstract manner in the rip and splash style for which he is best known. Instead of using the traditional easel, he affixed his canvas to the floor or the wall and poured and dripped his paint from a can; instead of using brushes, he manipulated paint with sticks, trowels or knives, sometimes obtaining a heavy impasto with a mixture of sand, broken glass or other foreign matter.