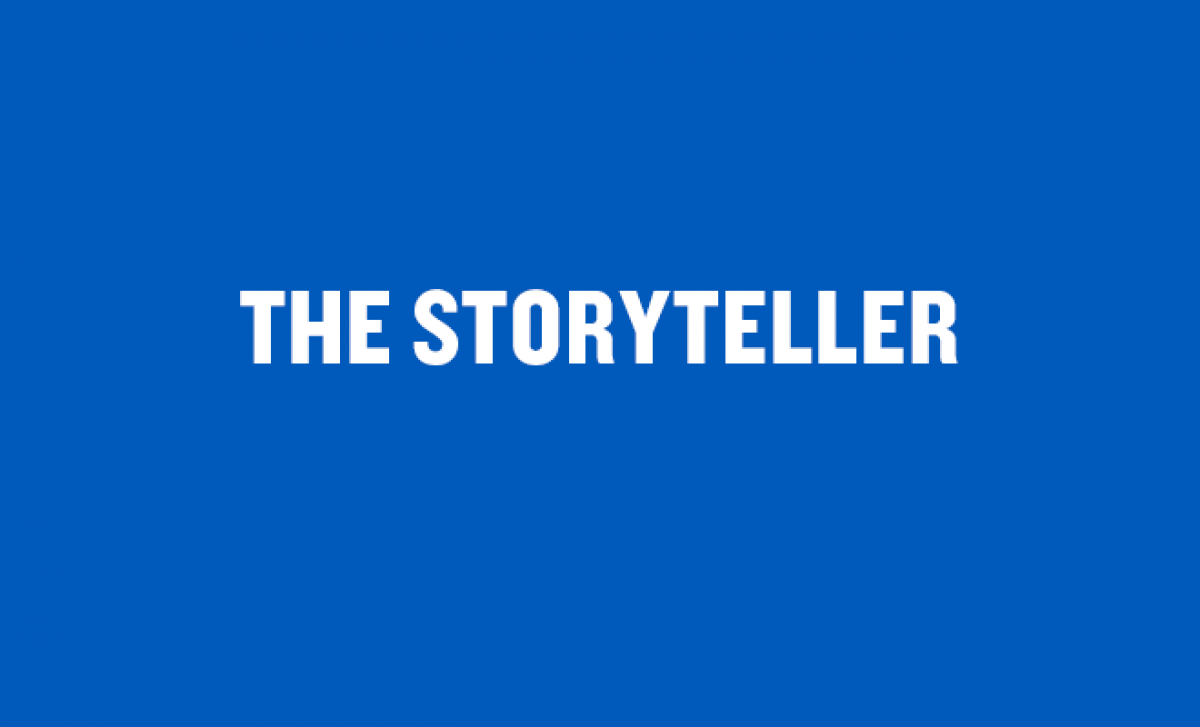 This June, a timely exhibition at the Art Gallery of Ontario explores how contemporary artists use storytelling to understand the social and political events of our time. Bold and thought-provoking, The Storyteller features video and photography, drawing, mixed media and installation works by leading international artists — including Cao Fei, Turner Prize winner Jeremy Deller with filmmaker Mike Figgis, Omer Fast, Liisa Roberts and Hito Steyerl.

The works engage a number of narrative strategies. Some are fictional reconstructions of actual events. Others are investigations into the relationship between past and present —as in Fast’s Spielberg’s List, a video exploring the experiences of extras in Stephen Spielberg’s film Schindler’s List. Some of the featured artists, like Fei, incorporate contemporary versions of fairy tales and folklore, while others offer first-person explorations of current political situations. At its heart, The Storyteller invites us to engage in each narrative so that we can explore, and understand, our own involvement in historical processes and current events.

Whose Utopia, 2006
Single-channel video with color and sound
20 minutes
Courtesy of the artist and Lombard-Freid Projects, New York

The Battle of Orgreave, 2002
Single-channel DVD video with color and sound
62 minutes
Courtesy of Artangel, London and Channel 4

London-based artist Ryan Gander takes as his focus modernism’s failed utopian gestures. The Boy Who Always Looked Up tells the story of the death of architect Ernö Goldfinger, as seen through the eyes of a boy living in the shadow of Goldfinger’s blighted urban housing project, the Trellick Tower, built in Notting Hill, London, in 1973. In this poignant study of dashed hopes combined with the promise of sustained effort, Gander uses the genre of the children’s book to cast light not only on the specific story of Trellick Tower but also on the aspirations and dilemmas of contemporary urban development more generally. The sinister yet strangely magical floating installation compliments the sense of impossible wonder at the book’s core.

Objects of War no. 3, 2006
Single-channel video with color and sound
55 minutes
Courtesy of the artist

Objects of War no. 4, 2006
Single-channel video with color and sound
72 minutes
Courtesy of the artist

Joachim Koester is a Danish artist based in Copenhagen and New York whose photographs and videos consider the relationship between geography, biography and historical recollection. For the above photo essay, Koester recreated the path traveled by Immanuel Kant on his daily walks through his native Kaliningrad. As Koester seeks to rediscover what Kant might have witnessed, he simultaneously confronts traces of multiple histories, from medieval ruins and abandoned Communist-era building projects to contemporary high-rises. What results is a vision of self and history as phenomena that must be lived and encountered rather than chronicled once and for all.

War Tourist in the Suburbs of Paris, (one of five episodes of the project War Tourist), 2004-08
Single-channel color video with sound
19 mins., 42 secs.
Courtesy of the artist

Emanuel Licha’s War Tourist in the Suburbs of Paris is part of an ambitious project composed of five videos shot in infamous sites of war or disaster that Licha surveyed with the help of a local guide, as tourists do when visiting exotic landmarks or ancient ruins. But here, the Canadian artist—who divides his time between Montreal and Paris—travels no further than his own backyard: the outskirts of the French capital in the aftermath of the 2005 riots. As Licha’s guide points out his former home—a building destroyed in the riot—recalls the tear-gassing of the local mosque, and suggests that the violence was less a reprisal to the ambiguous deaths of two local teens at the hands of the police then an expression of the pent-up economic and racial frustrations of the neighborhood’s mostly poor, black Muslim inhabitants, his dispassionate “tour” transforms into a heartfelt story, a moving account of lived experience.

Missing Books is an artists’ collective based in Amsterdam dedicated to republishing books that have never been reprinted and thus are available only on the secondhand market. The installation Un oscuro día de justicia consists of two components relating to the Argentinian writer and activist Rodolfo Walsh, who was shot in Buenos Aires on March 25, 1977, presumably by agents of the country’s military dictatorship: Walsh’s 1973 novel by the same title (here republished and translated into English for the first time), which draws metaphorical parallels between his years in boarding school and Argentina’s political situation; and a video that imaginatively reconstructs Walsh’s route through the streets of Buenos Aires on the day of his death. Both Walsh’s book and the accompanying video use fiction as a means of approaching an otherwise inaccessible historical reality.

14B4, Lt. Col. Bulimore, commander of Task Force 1/6, meets with the sheiks of Buritz to discuss money for local projects. The sheiks were always interested in my drawings and often asked for them as gifts. Baquba, Aug, 2004 (from the series Iraq, 2003-05), 2004
Watercolor and ink on paper
10 3/4 x 15 in.
Courtesy of Postmasters Gallery, New York

11A2, Iraqi police barricade on Abu Nawas Street, Next to the Tigris River. These barricades were part of the elaborate defenses around the Palestine and Sheraton hotels. June, 2004 (from the series Iraq, 2003-05), 2004
Watercolor and ink on paper
12 1/4 x 15 3/4 in.
Courtesy of Postmasters Gallery, New York

Rakowitz is an American artist of Iraqi-Jewish descent, noted for making politically charged installations and public projects. His recent work considers the contemporary crisis in Iraq. For The Storyteller, Rakowitz will present a version of his recent Return project, in which the artist resurrected his grandfather’s import-export business to Iraq in order to bring Iraqi dates to the U.S for the first time in twenty-five years. The installation will recreate the store in Brooklyn that Rakowitz temporarily occupied in the winter of 2006-07 – complete with wall panels, date products, objects involved in transport and, most important within the context of this exhibition, emails and blog reports detailing Rakowitz’s conversations with visitors to the store (as well as with his Iraqi contacts) about their first and last encounters with Iraqi dates. For Rakowitz, social consciousness resides as much in the opportunity for communicative exchange as it does in real political action.

What’s the Time in Vyborg?, 2000-04
Single-channel video with color and sound
87 minutes
Courtesy of the artist

Liisa Roberts is a Finnish-American artist living in Helsinki and St. Petersburg. Between 2001 and 2004, Roberts directed a project in Vyborg, a formerly Finnish, subsequently Soviet and currently Russian city that houses one of the great architectural works of Alvar Aalto: a municipal library built in 1933, when the city was under Finnish jurisdiction, and heavily damaged during WWII. Roberts’ project takes as its point of departure the joint Russo- Finnish effort to restore Aalto’s library, initiated after the fall of the Soviet Union. Working with a group of six local teenage girls and a large number of collaborators from different disciplines, Roberts developed a program of narrative-based exhibitions, performances, publications and TV presentations that take the library and its restoration as a prism through which to imaginatively explore the present, past and future of Vyborg and its inhabitants.

Journal No.1: An Artist’s Impression, 2007
Single-channel video with color, black-and-white, and sound
21 minutes
Courtesy of the artist

Hito Steyerl is an artist based in Berlin whose videos explore the uncertain relationship between aesthetics and documentary truth. What, her work asks, is a “document” and how can we retain an authentic connection to the real world while acknowledging the provisional nature of meaning? Journal No. 1: An Artist’s Impression, takes as its subject the first Bosnian newsreel, made in 1947 and destroyed in 1993 during the Bosnian war. In the video, a Bosnian artist attempts to reconstruct the lost newsreel—which depicted literacy classes offered to Muslim women as part of a general emancipation program under Tito— according to divergent accounts by two eyewitnesses. As various stories emerge, including that of the artist himself, the final result is a meditation on the multifaceted nature of war and national identity.

The exhibition is organized and circulated by

Guest curators for the exhibition are

The Andy Warhol Foundation for the Visual Arts, the Horace W. Goldsmith Foundation and the iCI partners.