University of Manitoba
Jean Borbridge is currently pursuing a Bachelor of Fine Arts Honours at the University of Manitoba. Her practice primarily focuses on photography and painting. Her interest in documentary photography began when she took a semester off of school to live and volunteer in Monrovia, Liberia in 2016. Her work often depicts spaces that carry identity, history, and memory that live within and beyond their boundaries. Her fascination in photography has grown from her practice as a painter, as she is drawn to spaces that are layered both physically and conceptually. In her series, The Poetics of Liberia Monrovia, she documented abandoned former colonial buildings that still remain guarded long after their desertion. Her series acts as a reminder of the history of colonialism, war and the current political climate of the region. Her work has been shown at the Winnipeg Art Gallery and most recently a site-specific installation at the national historic site, The Forks, in conjunction with LandMarks2017. 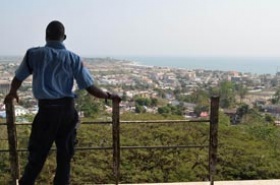