University of Guelph
Rachel Meneguzzi is a photo-based artist completing her BA in Studio Art at the University of Guelph. Meneguzzi’s work explores both materiality and human interaction with photography and digital imagery and works in various photographic mediums of camera-less and digital photography. In past work, Meneguzzi has been interested in the use of technology within both physical and online spaces, investigating both human relation with technology and exploring unconventional materiality and installations of photography. More recently, Meneguzzi has been working with the translation of three-dimensional spaces and objects into two-dimensional photographic images as well as the translation of two-dimensional photographic imagery into three-dimensional photographic objects. This process of translation is accomplished through physical manipulation of paper, darkroom techniques and camera techniques. As a result, Meneguzzi’s work often encourages the viewer to question both what they are looking at and how the image was created. Her practice moves beyond traditional photography and challenges photography in a contemporary context. Recent achievements include placing in the University of Guelph’s Juried Art Show, receiving the Gordon Couling Scholarship and showing in Withheld at the Boarding House Gallery in Guelph, Ontario. 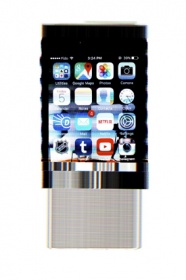