University of Toronto
Maximilian Suillerot was born in Mexico City in 1991. He holds French and Mexican nationalities. After spending all of his life in Mexico City, he moved to Paris in 2010 where he began his artistic training at the Ateliers de Recherche, de Création Artistique et D’Enseignement Supérieur (Les ARCADES) in Issy-les-Moulineaux. Upon finishing those studies, he moved to Canada in 2011 to further his education at the University of Toronto, where he obtained a Specialist degree in Visual Studies (hons) in 2016. He currently lives and works in Toronto. As a multi-media artist he works trying to understand inner processes, as well as the limits of intimacy and personal experiences. His work is part of an ongoing exploration of humans in relation to death, grief, personal narrative and mental isolation amongst other categories. His practice plays with concepts that encompass the duality of presence and absence. Portraits are used to raise questions surrounding relationships and to play with the evident fragility of existence. The human concept of memory is questioned and put to the test. Rituals are created as a coping mechanism to deal with life; the reality of uncertainty is exposed, and all of its consequences are accepted. 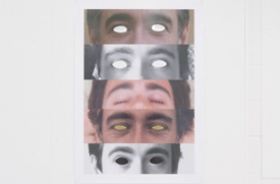