OCAD University
Mara Gajic is currently a student at OCAD University pursuing a BFA in photography. Her work is driven by elements of performance and costume to explore open narratives of self-construct and personal psychology and the quiet space between imagination and reality. Often using herself to stage her images, she imposes new realities on both herself and her photographs through the embodiment of a performative role to communicate underlying personal states in the form of colourful visual narratives and to initiate an unspoken dialogue between the viewer and artist, which is mediated through the photograph. In spring 2014, Mara was the recipient of the Emerging Artists and Designers Scholarship. In February 2015, she took part in Here, her first group exhibition at Autumn Gallery in Toronto alongside nine photography students from OCAD. Some of her most recent work has been selected to be in the Art with Heart Auction in fall 2015. 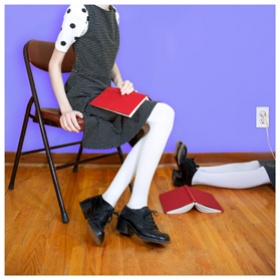