Laurie Simmons stages photographs and films with paper dolls, finger puppets, ventriloquist dummies and costumed dancers as “living objects,” animating a dollhouse world suffused with nostalgia and colored by an adult’s memories, longings, and regrets. Simmons’ work blends psychological, political, and conceptual approaches to art-making, transforming photography’s propensity to objectify people, especially women, into a sustained critique of the medium. She has received many awards, including the Roy Lichtenstein Residency in the Visual Arts at the American Academy in Rome (2005), and fellowships from the John Simon Guggenheim Memorial Foundation (1997) and the National Endowment for the Arts (1984). She has had major exhibitions at the Museum of Modern Art, New York; Baltimore Museum of Art; San Jose Museum of Art, California; Walker Art Center, Minneapolis and she has participated in two Whitney Biennial exhibitions (1985, 1991) and was included in the 2013 Venice Biennial. Her work is represented in many noted collections including the Los Angeles County Museum of Art; the Metropolitan Museum of Art, New York; the Art Institute of Chicago; the Solomon R. Guggenheim Museum; and the Whitney Museum of American Art, New York, among others. 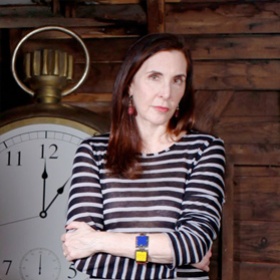