LaToya Ruby Frazier was born and raised in Braddock, Pennsylvania. She earned a B.F.A. in applied media arts from Edinboro University of Pennsylvania in 2004, and an M.F.A. in art photography from Syracuse University in 2007. She completed the Whitney Museum of American Art Independent Study Program in 2011. Her work is informed by late 19th- and early 20th-century modes of representation in documentary practice. With an emphasis on postmodern conditions, class, and capitalism, Frazier investigates issues of propaganda, politics, and the importance of subjectivity.Her work has been shown in museums and galleries in New York City including the Whitney Museum of American Art: 2012 Whitney Biennial, P.S.1 MoMA 2010 Greater New York, the New Museum of Contemporary Art 2009 triennial Younger Than Jesus, the Bronx Museum of the Arts, Living and Dreaming, the Museum of the City of New York, Moveable Feast and at the Andy Warhol Museum Pittsburgh Biennial, Gertrude's /Lot. Her first solo-museum show Mother May I was held at the Museum of Contemporary Art Detroit in 2010. Her upcoming 2013 solo-projects include, A Haunted Capital at the Brooklyn Museum and Witness at Contemporary Arts Museum Houston. Frazier's work has been exhibited internationally at the 2012 Daegu Photo Biennale, Daegu Korea, the 2011 Incheon Women Artists' Biennale, Incheon Korea, in Commercial Break, Garage Projects Venice, Italy and with Galerie Michel Rein in Paris. Currently LaToya is a featured artist in the Art 21 documentary series New York Close Up. Since 2007 she has been the Associate Curator for the Mason Gross Galleries at Rutgers University, where she has also taught photography in the Mason Gross School of the Arts. In 2012 Frazier was appointed critic in photography at Yale University. 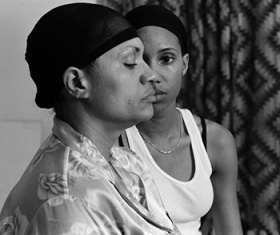