Canada
Stocki was raised in Winnipeg, Canada. She earned two undergraduate degrees from the University of Manitoba (Bachelor of Science and Fine Arts) before completing her Master’s degree in Photography at Yale University (2009). Elaine has exhibited at the Deutsche Guggenheim (Berlin) and Zach Feuer (New York). She divides her time between Brooklyn, New York and Winnipeg, Canada. 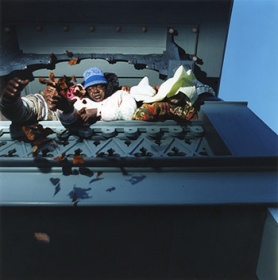