Mexico
Federico Gama was born in Mexico City in 1963. He studied journalism at the National Autonomous University of Mexico and graphic design at the Autonomous Metropolitan University Xochimilco. He has been a documentary photographer of urban youth and themes since 1988. Gama’s work has received numerous awards and recognitions. In 2008, he was nominated for the All Roads Photography award by the National Geographic Society. In 2002, he was awarded the main prize at the 10th Photography Biennale organized by Centro de la Imagen. During the tour of the exhibition for this biennale, Gama won the Audience Award in the cities of Mexico and Oaxaca. In 1999, Gama received first place in the International Biennial of Photography in Puerto Rico. In 2001, he was among the finalists for the first edition of the Premio Nuevo Periodismo Iberoamericano en Cartagena, Colombia. He was a fellow of the Young Creators Grant program of FONCA in 1997.

Gama has participated in 20 individual and 33 group exhibitions in Mexico, Italy, Argentina, Guatemala, Brazil, Germany, China, the United States and Spain. He has lectured at conferences and university courses, and at schools of photography. He is co-author of Jóvenes, Cultura e Identidades Urbanas (Youth, Urban Culture and Identities) (Porrúa and UAM Iztapalapa, 2002), and Cholos a la Neza, Otra Identidad de la Migracion (Cholos a la Neza, Another Identity of Migration) (IMJ, 2008). 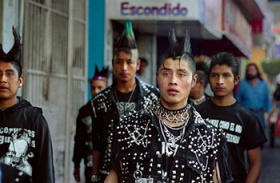