Museographer, researcher, writer and editor, Alfonso Morales graduated in social and political sciences as well as from the University Centre for Film Studies at UAM. He was part of the founding team for the Centre for Graphic Arts of the General National Archives. Morales Carrillo has held directorships of the departments of research and museology at the National Museum of Popular Culture. He has coordinated research and exhibitions, both national and international, on different subjects related to popular culture in Mexico: the review theatre, the circus, the comic strip, calendar images, games of fortune, music, radio and cinema. Morales Carrillo was curator of the exhibition Asamblea de Ciudades: Cultura y vida cotidiana en la ciudad de México, 1920–1950. He has contributed to the conservation and dissemination of various photographic, artistic and political archives, including that of photographer Manuel Ramos and caricaturist Abel Quezada. Morales is author of Los recursos de la nostalgia (essay), Parches y remiendos (short story), El Gran Lente (a historiography of José Bustamante’s photo studio), El teatro de los hechos (research into the career of Enrique Metinides, a yellow press/human interest journalist), Foto insurrecta (a survey of the works of photojournalist Rodrigo Moya), Iconofagia (essay) and Eternidad fugitiva (essay).

Morales Carrillo is co-author of Imaginarios y fotografía en México 1839–1970. He has written for theatre and cabaret, among them Atracciones Fénix, a play directed by Jesusa Rodríguez and invited for participation at the Mozart Festival in Vienna, Austria. Morales Carrillo was awarded an Ariel for his artistic direction of the movie La Leyenda de una mascara, directed by José Buil. Morales has published essays and articles on the history of photography in Mexico, and on the work of specific authors. He was chief of photography of Foto-Click and Zonas magazines. He is currently director of Luna Córnea magazine, published by Centro de la Imagen, as well as curator of the photography collection at Fundación Televisa. Morales’s most recent project was Gabriel Figueroa: Cinefotógrafo. 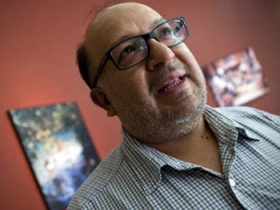