Canada
Raymonde April was born in Moncton, New Brunswick, in 1953 and grew up in Rivière-du-Loup, in eastern Quebec. She lives and works in Montreal where she has taught photography at Concordia University since 1985.

A photographer and artist, she has been known from the late 70s on for her minimalist practice inspired by the day-to-day, at the junction point of documentary, autobiography and fiction. Her work is often exhibited in Canada and abroad, and major solo exhibitions include «Voyage dans le monde des choses», organized by the Musée d’art contemporain de Montréal in 1986, «Les Fleuves invisibles», produced by the Musée d’art de Joliette in 1997 and circulated in Canada and France until 2000, and «Tout embrasser», presented at the Leonard and Bina Ellen Art Gallery of Concordia University as part of Le Mois de la photo à Montréal 2001.

Raymonde April’s works are in leading Canadian museums and many private collections. In November 2003, Raymonde April received the Prix Paul-Émile Borduas, the highest distinction attributed by the Government of Quebec to an artist working in the visual arts. In 2004, she was artist-in-residence at the Conseil des arts et des lettres du Québec studio in New York City. 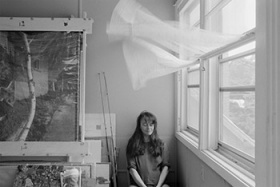