University of Lethbridge
Angeline Simon was born in Vancouver, British Columbia in 1993, and is currently completing the BFA Art Studio program at the University of Lethbridge. Her work has been presented in both public and private institutions, including a group exhibition at the Southern Alberta Art Gallery in Lethbridge. Presented with the opportunity of a dark room, analogue photography became a central role in her practice as she primarily works with medium format. Engaging with notions of psychological space, her interest lies in creating work that manipulates perception and explores relationships between subject and environment. As a descendant of European and Asian ancestry, her work also focuses on constructing narratives that are influenced by these different cultures. 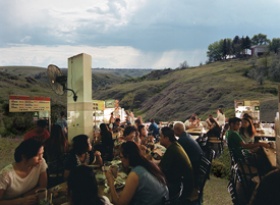