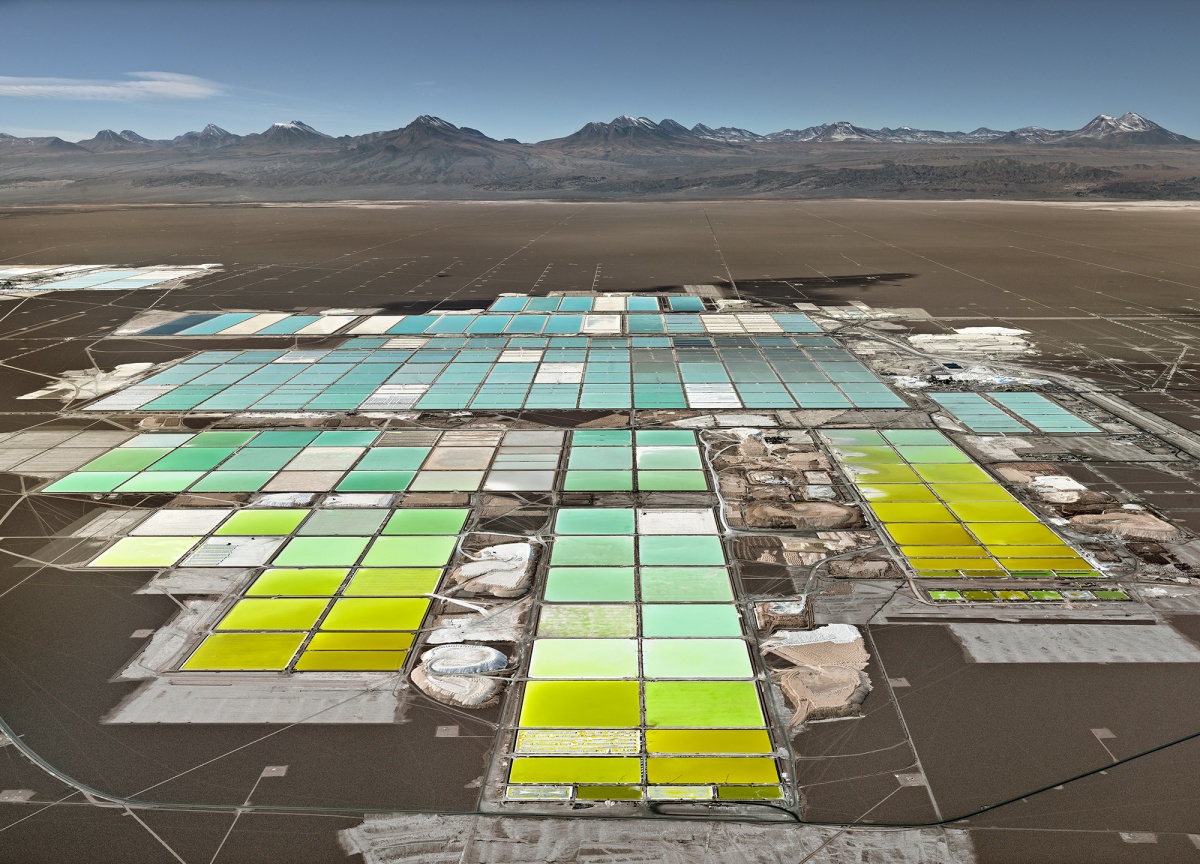 TORONTO and OTTAWA – Next fall, the Art Gallery of Ontario (AGO) and the Canadian Photography Institute (CPI) of the National Gallery of Canada (NGC) will co-present Anthropocene, a major new contemporary art exhibition that tells the story of human impact on the Earth through film, photography, and new experiential technologies. Co-produced with MAST Foundation, Bologna, Italy, the exhibition is a component of the multi-disciplinary Anthropocene Project from the collective of photographer Edward Burtynsky and filmmakers Jennifer Baichwal and Nicholas de Pencier. Organized by the artists in partnership with the three organizations, Anthropocene will run at the AGO and NGC simultaneously from September 2018 through early 2019.

The Anthropocene Project is based on the research of an international group of scientists making a case to formally change the name of the present geological epoch from Holocene to Anthropocene – the “Human Epoch”. This name change—a controversial idea currently under vigorous and passionate international debate—would represent a formal recognition and acknowledgement of what Burtynsky, Baichwal and de Pencier call the “human signature” on the planet. This scientific research has greatly influenced Burtynsky, who has been investigating human-altered landscapes in his artistic practice for 35 years, and directly relates to themes explored in the ongoing film and video work of Baichwal and de Pencier. The exhibition adds to the first retrospective of Burtynsky’s works titled Manufactured Landscapes (2003), organized by the NGC, as well as the three artists’ trilogy of films—Manufactured Landscapes (2006), Watermark (2013), and Anthropocene (expected 2018)—as a major vehicle to raise awareness of these important issues in sharp, visually compelling detail. Visitors will come away with a lasting sense not only of humanity’s collective impact on the planet, but also their individual impact.

“Climate change is a global phenomenon that cannot be ignored. By bringing together contemporary art with environmental science and anthropology, our two museums will lead a global conversation with a uniquely Canadian perspective about matters that impact us all,” said Stephan Jost, the AGO’s Michael and Sonja Koerner Director and CEO.

“Edward Burtynsky, Jennifer Baichwal, and Nick de Pencier are Canadian artists who are at the very forefront of their fields,” added Marc Mayer, Director and CEO of the National Gallery of Canada. “These exhibitions demonstrate the power of art to engage us aesthetically and intellectually on issues of pressing concern.”

The exhibition also includes a number of powerful high-resolution video installations that document the progression of human influence according to research categories of the Anthropocene Working Group scientists, including terraforming, extinction, anthroturbation (human tunnelling) and technofossils (human created materials, such as cement and aluminium). Through innovative augmented reality features, visitors will also be able to experience places and practices we are all connected to or responsible for but do not normally see.

“Our ambition is for the work to be revelatory, not accusatory, as we examine human influence on the earth both in planetary scale and geological time. Humans now change the earth’s system more than all natural forces combined, and we want to bear witness in an experiential way to these lasting impacts. The shifting of consciousness is the beginning of change,” the artists emphasized.

The simultaneous installations at the AGO and NGC are a rich pair of distinct experiences with certain key works appearing in both venues. Further details, including dates and subsequent venues, will be forthcoming. Follow #AnthropoceneProject for updates.

Anthropocene is organized by the Art Gallery of Ontario and the Canadian Photography Institute of the National Gallery of Canada and co-produced with the MAST Foundation, Bologna, Italy.

Edward Burtynsky is known as one of the world’s most respected photographers. His remarkable photographic depictions of global industrial landscapes are included in the collections of over 60 major museums around the world, including the National Gallery of Canada, the Museum of Modern Art, the Guggenheim Museum in New York, the Reina Sofia Museum in Madrid and the Los Angeles County Museum of Art in California. His imagery explores human systems imposed on the land.

Burtynsky’s distinctions include the TED Prize, The Outreach Award at the Rencontres d’Arles, the Roloff Beny Book Award and the Rogers Best Canadian Film Award. He sits on the board of directors for the Scotiabank CONTACT Photography Festival and The Ryerson Gallery and Research Center and is the Co-Founder of the Scotiabank Photography Award. In 2006 he was awarded the title of Officer of the Order of Canada and in 2016 he received the Governor General’s Award in Visual and Media Arts. Burtynsky currently holds seven honorary doctoral degrees. The National Gallery of Canada organized and toured the first retrospective of Burtynsky’s work, Manufactured Landscapes, in 2003.

Jennifer Baichwal has directed and produced documentaries for over 20 years. Her films have appeared around the world, winning awards nationally and internationally. Let It Come Down: The Life of Paul Bowles won an International Emmy in 1999. The Holier it Gets won Best Canadian Film at Hot Docs in 1999 and three Gemini Awards. Manufactured Landscapes, about the work of Edward Burtynsky in China, was released in 12 countries and won numerous international awards, including Best Canadian Feature Film at TIFF 2006. Act of God, about the metaphysical effects of being struck by lightning, opened the Hot Docs Film Festival in May 2009. Payback, an adaptation of Margaret Atwood’s Massey Lectures produced by Ravida Din and the National Film Board, premiered in competition at the Sundance Film Festival in January 2012 and was released in Canada and the U.S. that spring. Watermark (co-directed by Edward Burtynsky, produced and filmed by Nicholas de Pencier) premiered at the Toronto International Film Festival in September 2013, won the Toronto Film Critic’s Association prize for Best Canadian Film 2014 and the Canadian Media Awards prize for Best Documentary 2014.

Nicholas de Pencier is a director, producer, and director of photography working in documentary, performing arts, and dramatic film. As a producer and DOP, his credits include Let It Come Down: The Life of Paul Bowles (International Emmy), The Holier It Gets (Best Canadian, Hot Docs), The True Meaning of Pictures (Gemini, Best Arts), Hockey Nomad (Gemini, Best Sports), Manufactured Landscapes (Best Canadian Feature, TIFF; Genie, Best Doc), Act of God (Gala opening night, Hot Docs), and Watermark, (Special Presentation, TIFF and Berlin, Toronto Film Critics Award for Best Canadian Film, and CSA for Best Documentary). In 2010 he shot the documentary adaptation of Payback, which was selected for Sundance, 2012 and released theatrically in Canada and the U.S. de Pencier was admitted as a full member to the Canadian Society of Cinematographers in 2012.

More recently, Baichwal and de Pencier have moved into video installation work, producing content for the Tragically Hip’s Fully Completely and Man Machine Poem tours (2014/2016), as well as collaborating with the Rheostatics for Music Inspired by the Group of Seven at the AGO (2015). Their latest installation Ice Forms was part of The Idea of North: The Paintings of Lawren Harris, also at the AGO. Baichwal and de Pencier recently completed Long Time Running, a feature documentary on the Tragically Hip’s 2016 cross-Canada tour, which premiered at TIFF and is currently in broadcast and theatrical release.

ABOUT THE CANADIAN PHOTOGRAPHY INSTITUTE

The Canadian Photography Institute of the National Gallery of Canada is a creative and innovative centre dedicated to sharing, collecting, and questioning photography in all its forms. It brings people and communities together at the museum, online, and around publications to see, appreciate, and study photography. The Canadian Photography Institute was established in 2015 and officially launched in October 2016. Its collections build upon the National Gallery’s Photographs Collection. The Institute benefits from the unprecedented support of CPI’s Founding Partner Scotiabank, the Archive of Modern Conflict and the National Gallery of Canada Foundation. For more information, visit: gallery.ca/cpi.

ABOUT THE NATIONAL GALLERY OF CANADA

The National Gallery of Canada is home to the most important collections of historical and contemporary Canadian art. The Gallery also maintains Canada’s premier collection of European Art from the 14th to the 21st centuries, as well as important works of American, Asian and Indigenous Art and renowned international collections of prints, drawings and photographs. Created in 1880, the National Gallery of Canada has played a key role in Canadian culture for well over a century. Among its principal missions is to increase access to excellent works of art for all Canadians. For more information, visit gallery.ca and follow us on Twitter @NatGalleryCan, Facebook, YouTube, and Instagram.

ABOUT THE ART GALLERY OF ONTARIO

Located in Toronto, Canada’s largest city of 6.5 million, the Art Gallery of Ontario (AGO) is one of the largest art museums in North America. The AGO’s collection of close to 95,000 works ranges from cutting-edge contemporary art such as Untilled by Pierre Huyghe to European masterpieces such as Peter Paul Rubens’s The Massacre of The Innocents; from the vast collection by the Group of Seven to works by established and emerging Indigenous Canadian artists; with a photography collection that tracks the impact of the medium with deep holdings of works by artists such as Garry Winogrand and Diane Arbus; and with focused collections in Gothic boxwood miniatures and Western and Central African art. Drawing on this collection—as well as collaborations with museums around the world—the AGO presents wide-ranging exhibitions and programs, taking special care to showcase diverse and underrepresented artists. A major expansion designed by Frank Gehry in 2008 with lead support from the family of Ken Thomson makes the AGO a highly-photographed architectural landmark. Visit ago.ca and follow @AGOToronto to learn more.

ABOUT THE MAST FOUNDATION

The MAST Foundation is a non-profit institution in Bologna, Italy, created in 2013 to develop a cultural centre (MAST), which aims to promote corporate and social welfare, to foster creativity among the younger generations by offering educational programs for children, teenagers and adults, and to support projects related to photography. The MAST Collection consists of over 3000 works that trace the history of photography and tell the story of the extraordinary significance of industry and labour from the end of the 19th century until today. The PhotoGallery is an exhibition space curated by Urs Stahel presenting group and solo projects by celebrated photographers and younger talents. The MAST Foundation also organizes Foto/Industria, Biennial of Photography on Industry and Work, which reached in 2017 its third year with 14 exhibitions.