Workers Dance (Young Workers, 2021) consists of a set of photographs and videos that depict hired participants who had lost employment as a result of the pandemic-induced economic crisis. The photographs are headshot portraits that present each participant from the shoulders up and utilize visual strategies from Socialist Realism to form a critique and tell a hidden joke that is embedded in the photographs. The photographs are separated with a space between their corresponding videos that depict the rest of each participant’s body dancing laboriously to the government’s unemployment support agency’s telephone holding music. The resultant work is a multifaceted contemplation on the current pandemic-induced economic crisis and its effects on the working class, a reflection on multiculturalism, affirmative action, and art history; as well as a self-reflexive critique on the intentions behind producing culture about the working class. 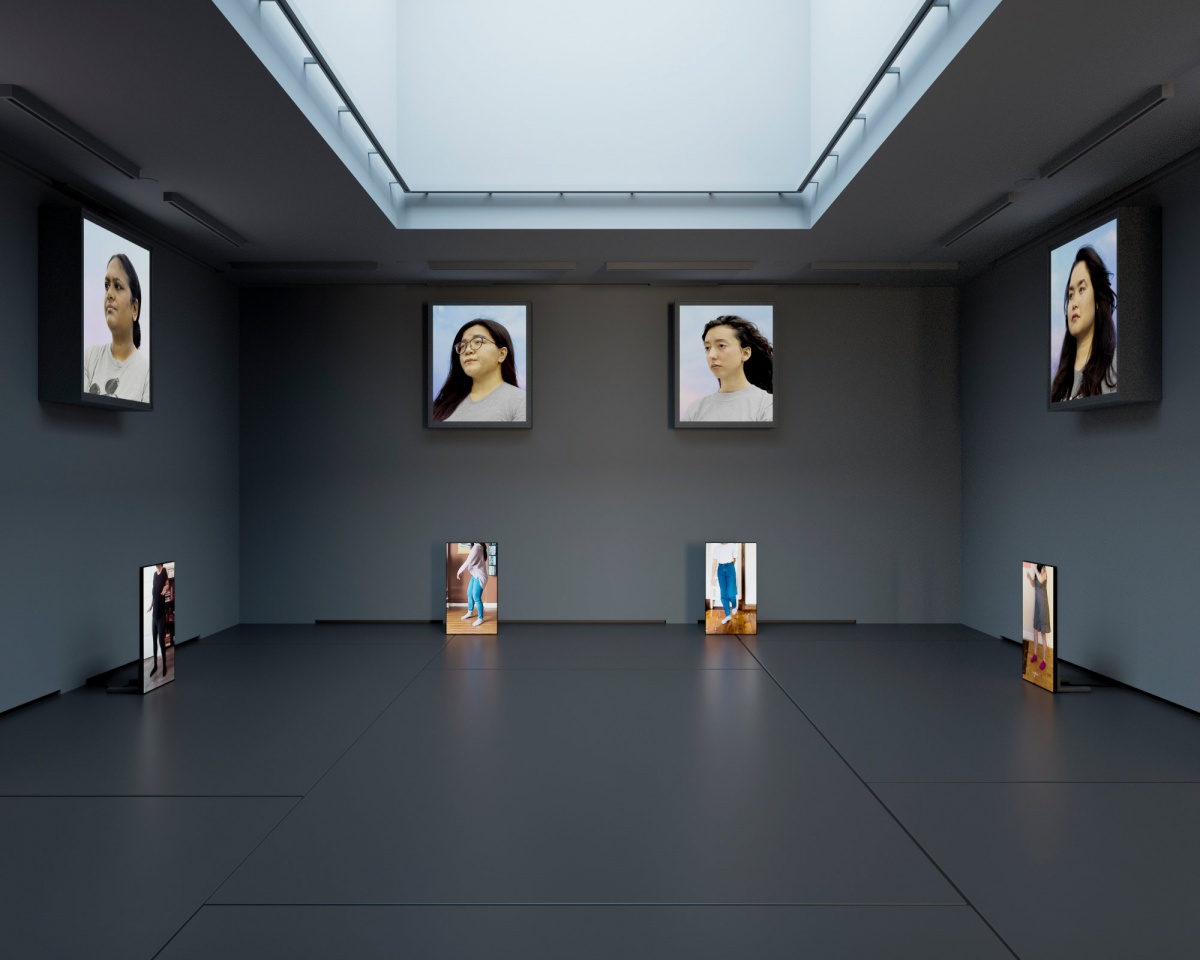 The title of my project is in part an homage and further development of an artwork by Jeff Wall entitled, Young Workers (1978-1983). Years prior to the crisis and this Artist-in-Residence program, I had known and appreciated this work by Wall wherein the artist utilizes the pictorial conventions of Socialist Realist portraiture. Wall’s Young Workers (1978-1983) features a standardized posture and positioning of the subjects in the artwork, requires the series to be viewed in aggregate rather than individually, and the series is installed above the natural sightlines of a viewer towards the ceiling of a gallery wall. These are conventions that are utilized to portray elite political cadres and leaders in sociailst republics and communist states, however, Wall had deployed these conventions on regular working class people. This would have been a striking statement when Wall debuted Young Workers (1978-1983) in West Germany, when across the Berlin Wall and the Inner German Border, these conventions were being utilized to exalt political elites1. Following and adapting the pictorial and conceptual threads of Wall’s Young Workers (1978-1983), I have produced my own rendition of young workers in Workers’ Dance (Young Workers, 2021).

My first task during the residency was to hire and work with a new generation of workers who are 35 or under; had experienced a work stoppage due to the pandemic-induced economic crisis, and who have received government support for subsistence. A Call for Participants was produced and circulated amongst my network for approximately two weeks at the beginning of May 2021. Participants were expected to have their images produced in their likeness, have their images shown publicly as artworks, attend virtual meetings, be photographed, and to video record themselves with their own cell phones and in their own dwellings. The Call of Participants also inquired about the type of work that the participants do, their preferred name and gender identifications, and the cell phone that they would use to video record themselves.

Of the 26 applicants that had responded: 77% were female or non-binary identifying; 50% were non-white 2; 70% were service workers3; the median age was 27; and the iPhone 8 was the most common cell phone, and therefore the most widely used camera in the pool of applicants. Applicants resided primarily in Toronto, with some from Mississauga, North York, and Scarborough. Initially, I had the idea to cast a group of people who were statistically reflective of the demographics of the pool of applicants. However, the task became less and less desirable because I had realized that I was now operating as an amateur census bureau.

In this frame of mind, I reexamined Jeff Wall’s Young Workers (1978-1983) and realized the artwork had a composition of 50% non-whites, and a visible gender split of 50% male and 50% female. Wall’s artwork seems to be reflective of the progressive politics from the period within which his artwork was created, which was in the era building up to the passing of the Canadian Multiculturalism Act in 1988. The fact that I had not initially noticed the demographics within Wall’s artwork speaks to the ubiquity and establishment of multiculturalism three decades onwards in my daily life in Toronto. 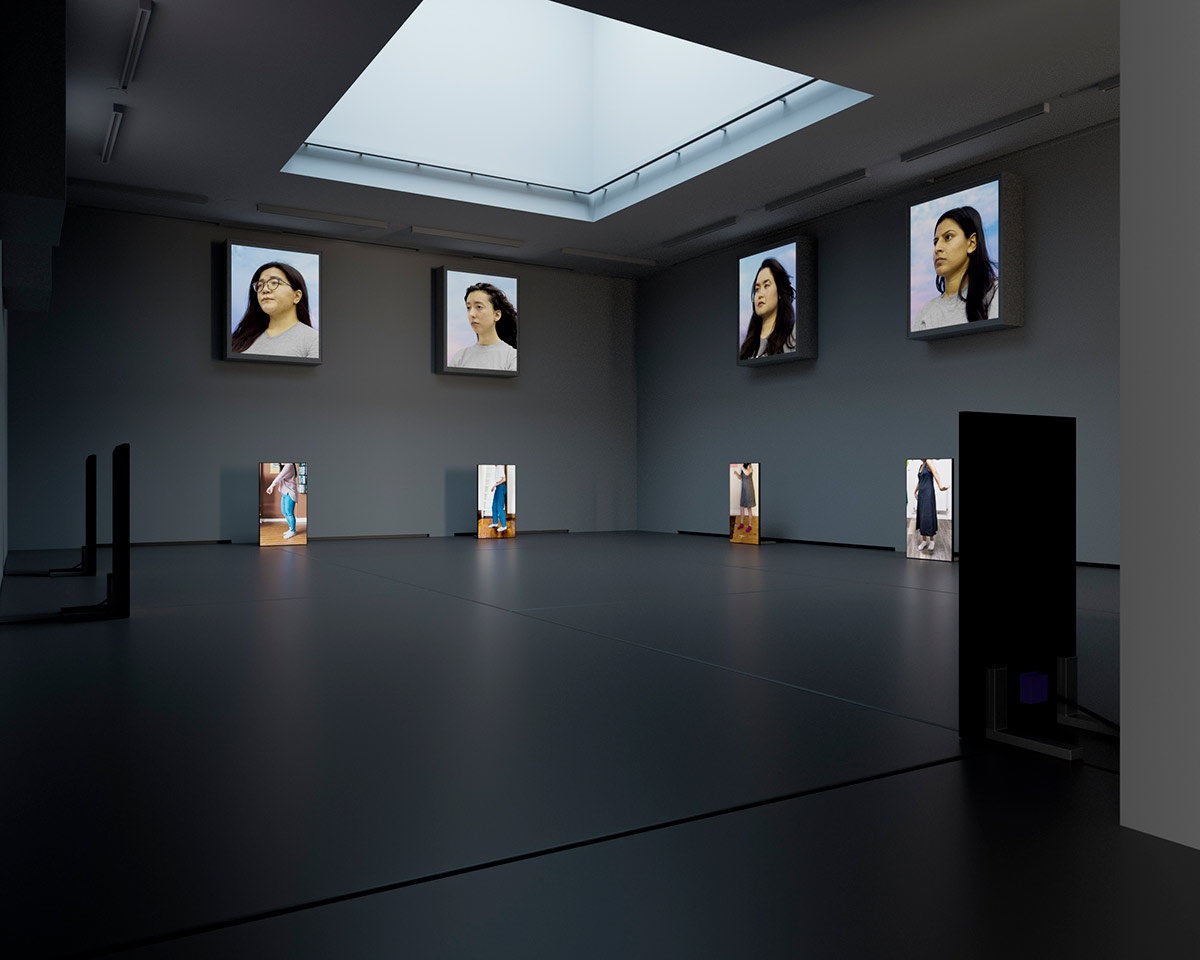 I decided to only cast a group of participants who were non-white and who self-indentified as female or non-binary. This group also inadvertently continues a national chronicle of people who migrated to Canada during the formation or after the passing of the Canadian Multiculturalism Act. Indeed, many of the participants who were cast have some familial link to Asia Pacific, Middle East, and South America; and the countries within these regions that experienced Cold War conflicts and destabilization efforts. The saying “we are here because you were there” comes to mind. The gender composition of the group is meant to be reflective of the asymmetrical impacts on women, and specifically women of colour, during the pandemic-induced economic crisis, where there is a compounding crisis of labour for wages and for the social reproduction of the household during pandemic stay-at-home orders. I wanted to cast a group of people who could function as a portrait of a new generation of workers at a moment of crisis in the early Twenty-First Century. While the resultant group do reflect the particularities of the moment, they also naturally reflect the limits of this one project, in both its demands of the participants to possess a specific quality of ability, as well as the limits of the channels and two-week period for which the Call for Participants was circulated. These limitations resulted in a pool of applicants who often possessed some level of higher education, were upwardly mobile, and were adjacent to or worked partially4 in the fields of culture and academia. There were no Black or Indigenous applicants, nor applicants from construction, agriculture, and manufacturing sector5. These limitations could be improved upon should this project be continued in different locations and in response to new economic crises. 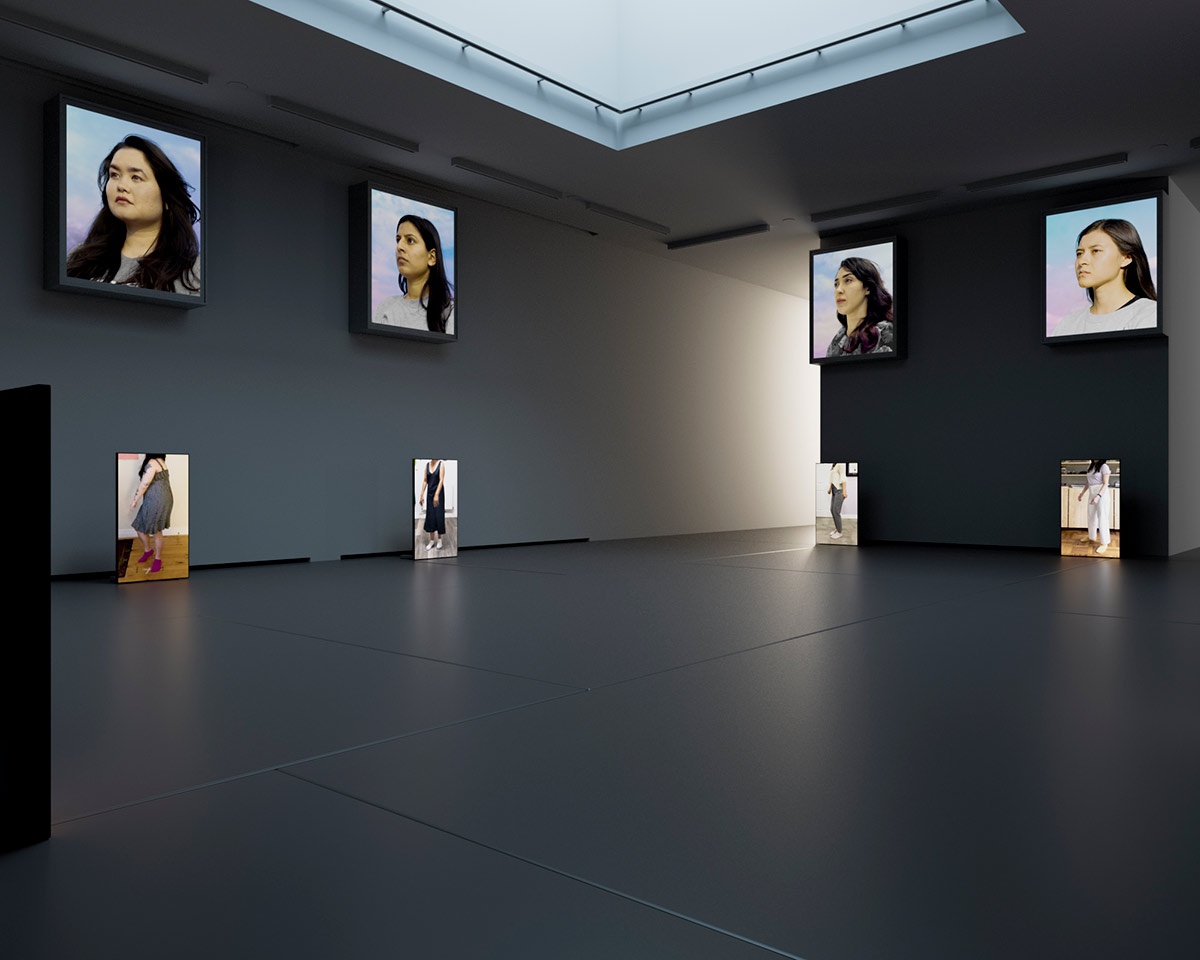 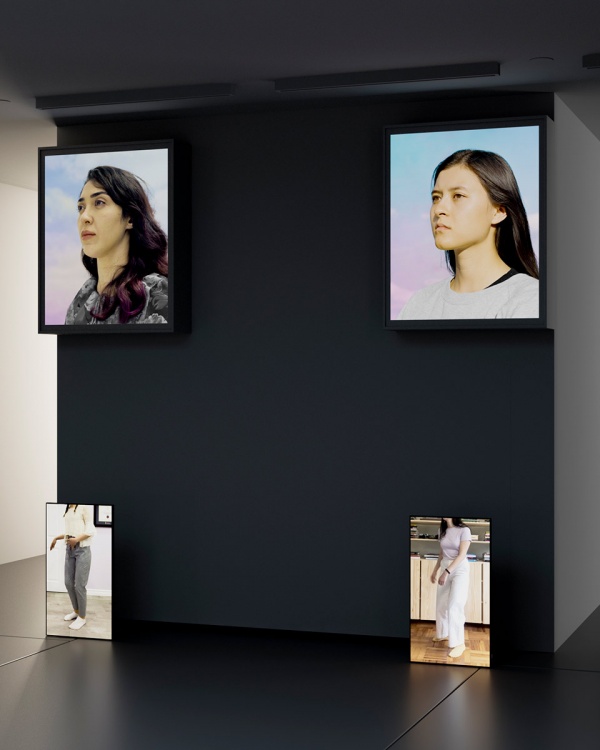 After the participants were cast, one-on-one virtual meetings for logistics and introductions were held. These conversations were incredibly honest and meaningful. In most cases, many participants felt a sense of bittersweetness about their situation. Being able to take a prolonged break from work and receive subsistence from government support programs provided a reprieve from the labour intensive and sometimes verbally abusive work in the service industry; an opportunity to rest, to consider new career options, and to volunteer for initiatives that were fulfilling for each participant. Others continued to struggle, due to being unable to fully qualify for government support programs. These participants had completely fallen through the bureaucratic cracks, and were faced with a very difficult job market in the midst of a pandemic. After the initial introduction meeting, another meeting was staged to find the most appropriate place in each of the participants' homes to record themselves dancing to the telephone holding music of the government’s unemployment support agency. After this meeting, I sent the participants drawings to match on the cameras on their phones, as well as a special mix of the telephone holding music. We then scheduled a time for the participants to record themselves and where I would also virtually direct the recording and provide technical support. 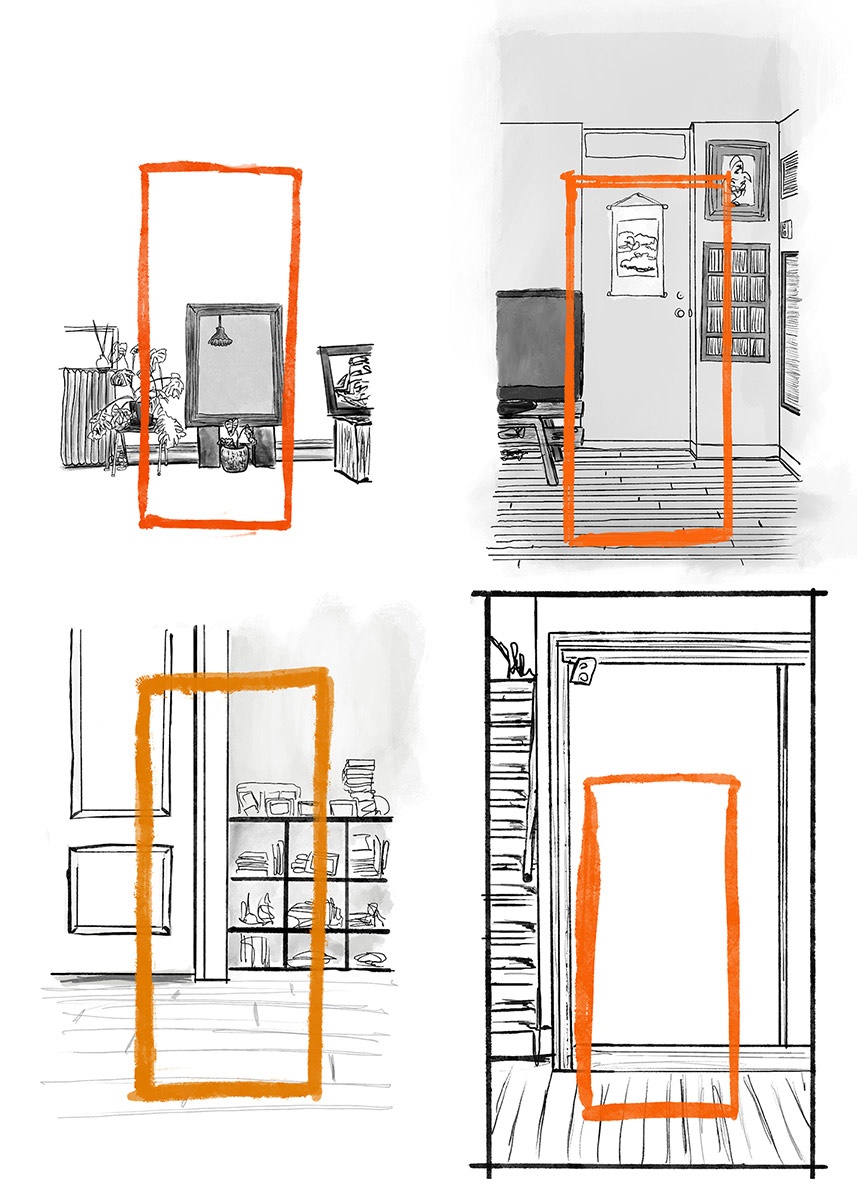 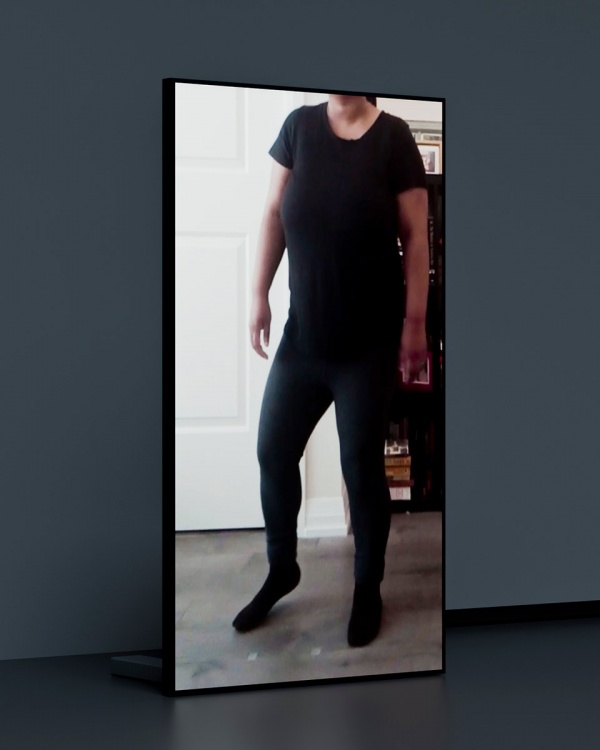 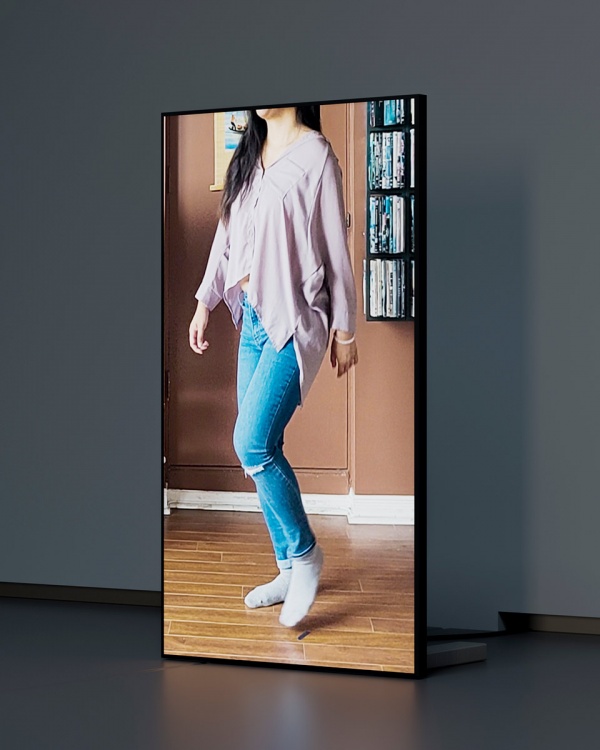 The final step of my production with the participants involved outdoor photoshoots to create headshot photographs that follow the compositional strategies in Jeff Wall’s Young Workers (1978-1983). These photographs were produced on a large format 4x5 camera that yielded high-fidelity images that stand-in contrast to the cell phone-quality videos. These summer photo shoots concluded with a debrief of the project over a meal or a bubble tea. The rest of the production took place in my studio on digital editing suites to complete the photographs and videos. As a completed whole, Workers Dance (Young Workers, 2021), presents distinct components that are meant to be considered all together. 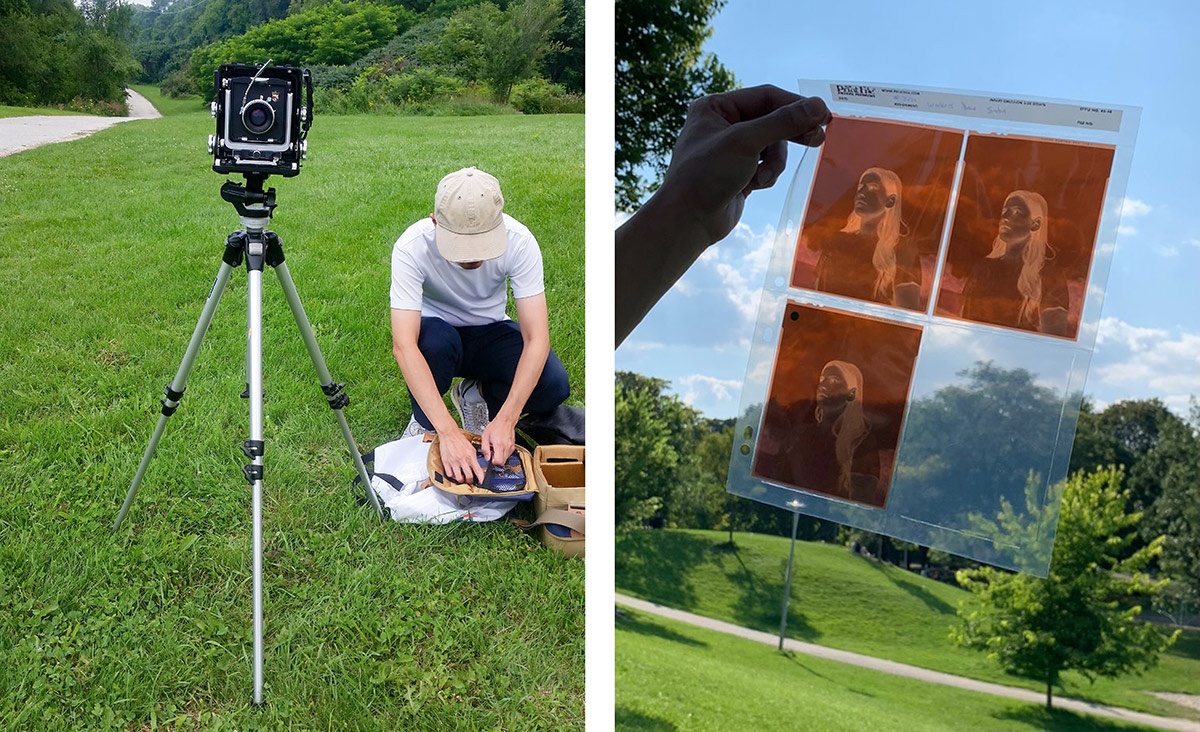 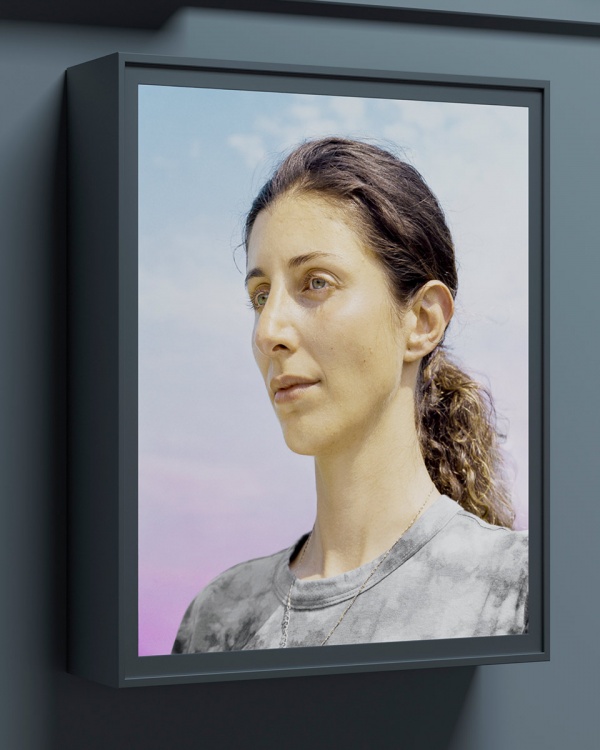 The photographs are meant to exert a sensation of power. The scale and positioning of the photographs require a viewer to gaze upwards, as if looking towards the sky, to observe the towering participants. The participants ascend through the clouds, disconnected from the realities of their material conditions on Earth. These photographs deploy conventions used to represent political elites and authoritarian rulers on normal working class people, and within these photographs is a self-deprecating joke: they embody the English-language idiom of “a head stuck in the clouds”6. This self-deprecating joke is meant to break the powerful illusions projected by the photographs, while also breaking the romanticization of the working class by artists, academics, ideologues, politicians, and employers when they claim to speak for the working class. The illusions of the photographs are further interrupted by the videos situated below that emanate the telephone holding music of the government’s unemployment support agency. 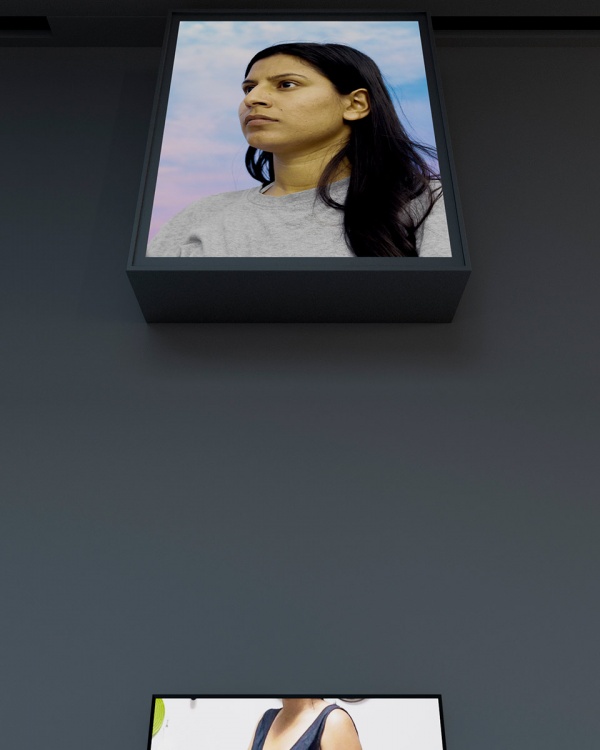 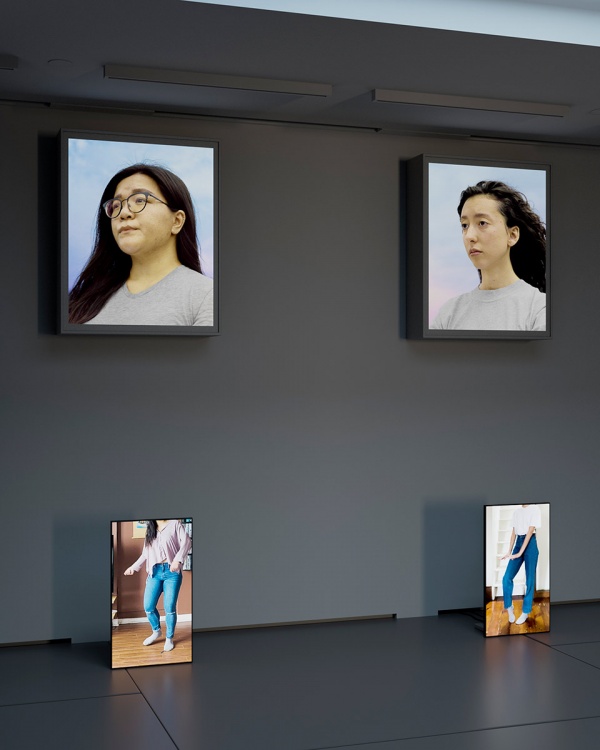 The videos, whimsical in their composition and quotidian in their quality, stand in contrast to uniformity and technical fidelity of the photographs. The videos are installed on the floor and occupy the same physical ground as the viewer. In comparison to the powerful photographs, the videos depict a vulnerable situation of unemployment wherein each participant has taken up the strange request by an artist to dance in their home to telephone holding music that embodies a deeply frustrating and humiliating experience in their pursuit of subsistence in a time of crisis. As one watches the videos closely it becomes apparent that the dancing is a laboured and alienated action that takes a physical toil on each participant. The participants simultaneously enter into each video frame, wait to begin dancing at the same time, and then dance for 30-minutes before stopping and leaving the video frames at the same time. These directed and routine movements repeat endlessly like the start and stop of the working day. 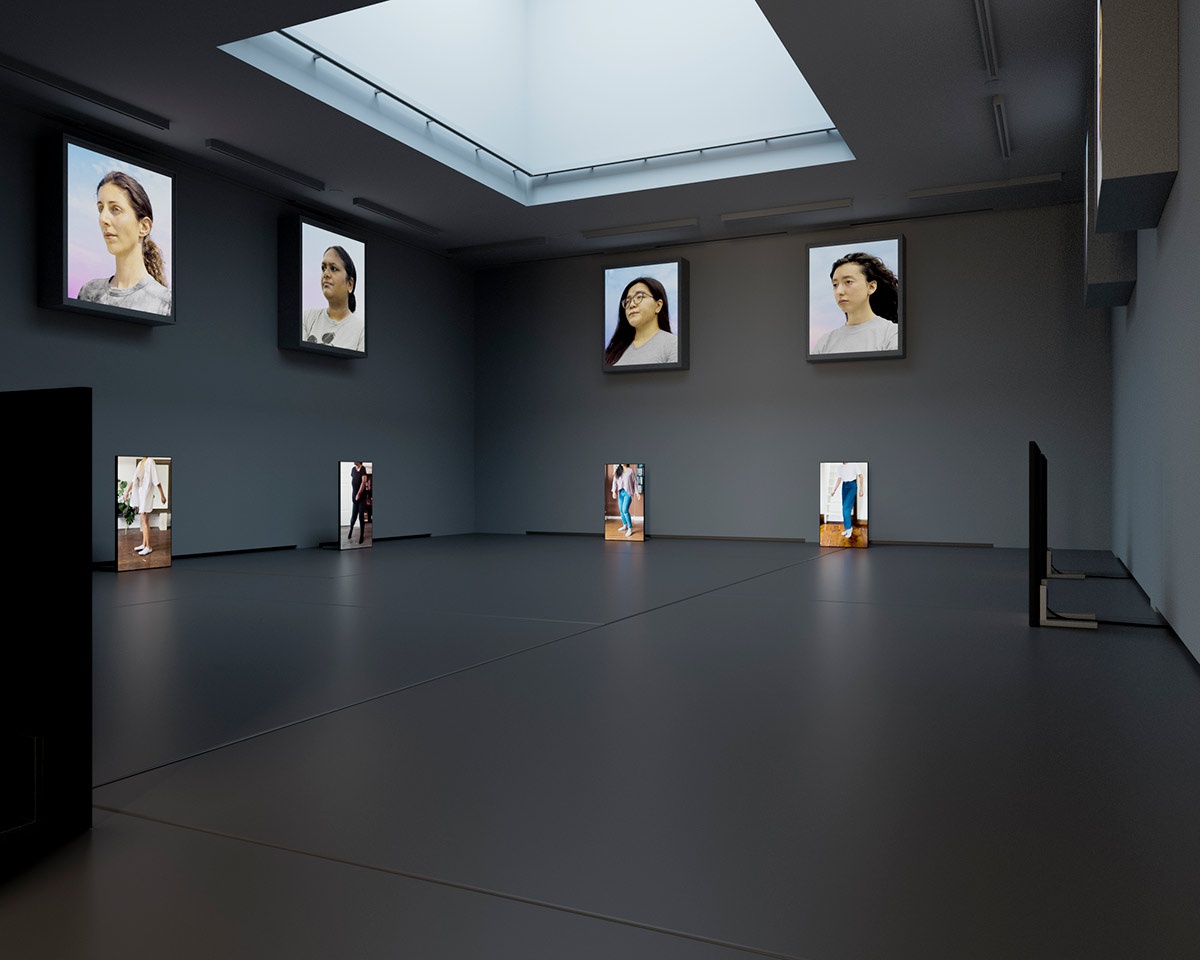 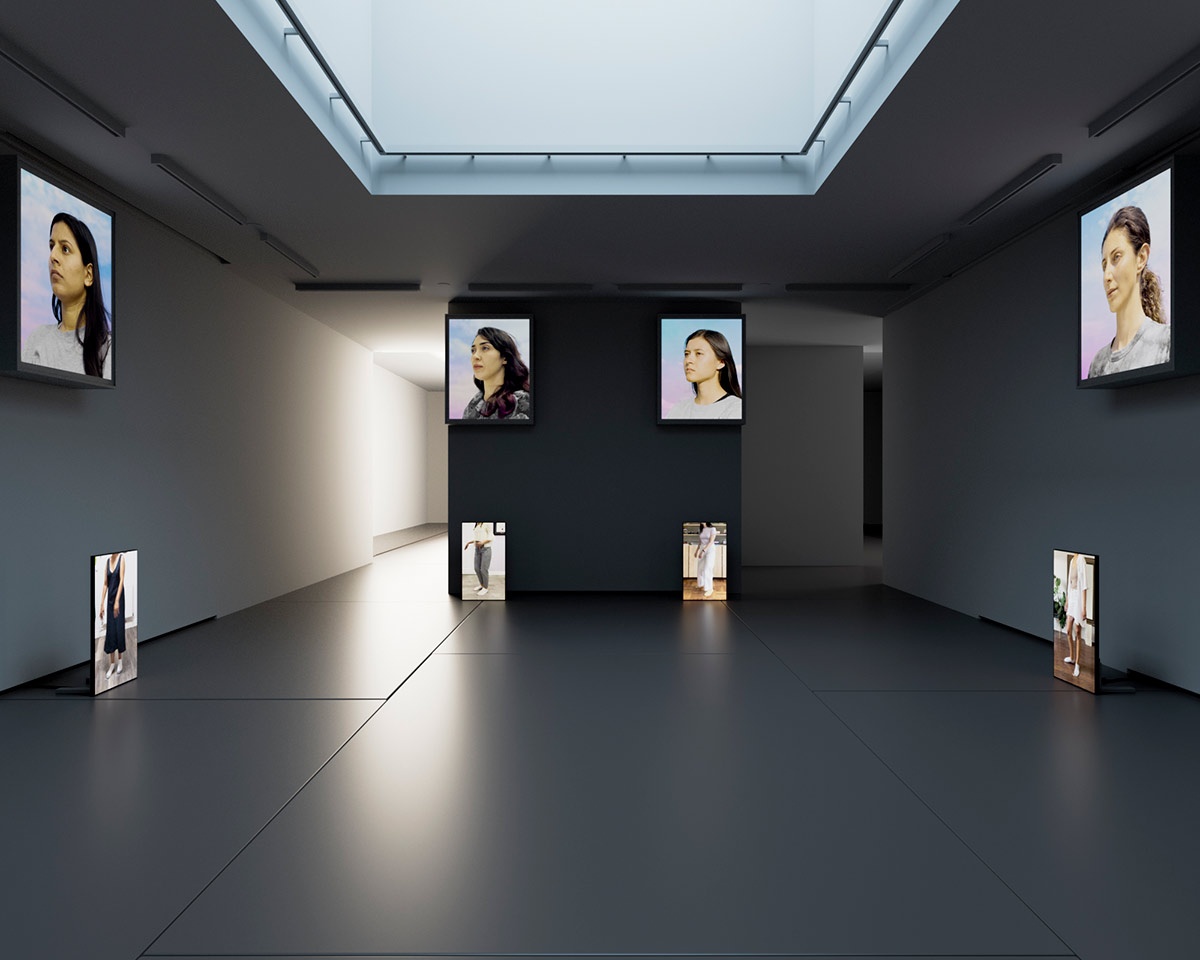 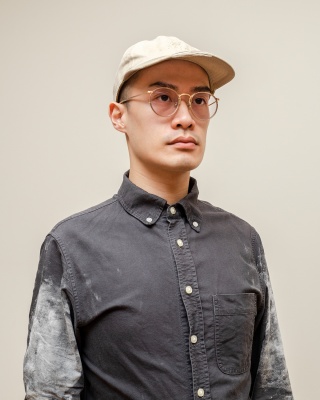 Courtesy of the artist

Alvin Luong (梁超洪) creates artwork based on stories of human migration, land and dialogues from the diasporic working class communities he lives and works with. These stories are combined with biography to produce artwork that reflects upon issues of historical development, political economy and social reproduction, and how these issues intimately affect the lives of people. In 2017, Luong was awarded the OCADU Off Screen Award for best new media installation at the Images Festival. In 2018, Luong was Artist-in-Residence at IOAM (Beijing) and lectured at the Institute for Provocation (Beijing). In 2019, the artist exhibited at Boers-Li Gallery (Beijing), was invited to pursue research at HB Station Contemporary Art Research Center (Guangzhou), and screened at Gudskul (Jakarta). In 2020, the artist screened at China Millennium Monument Art Museum (Beijing), produced a video program with Guangdong Times Art Museum (Gaungzhou), and was commissioned by The Bentway and the City of Toronto.