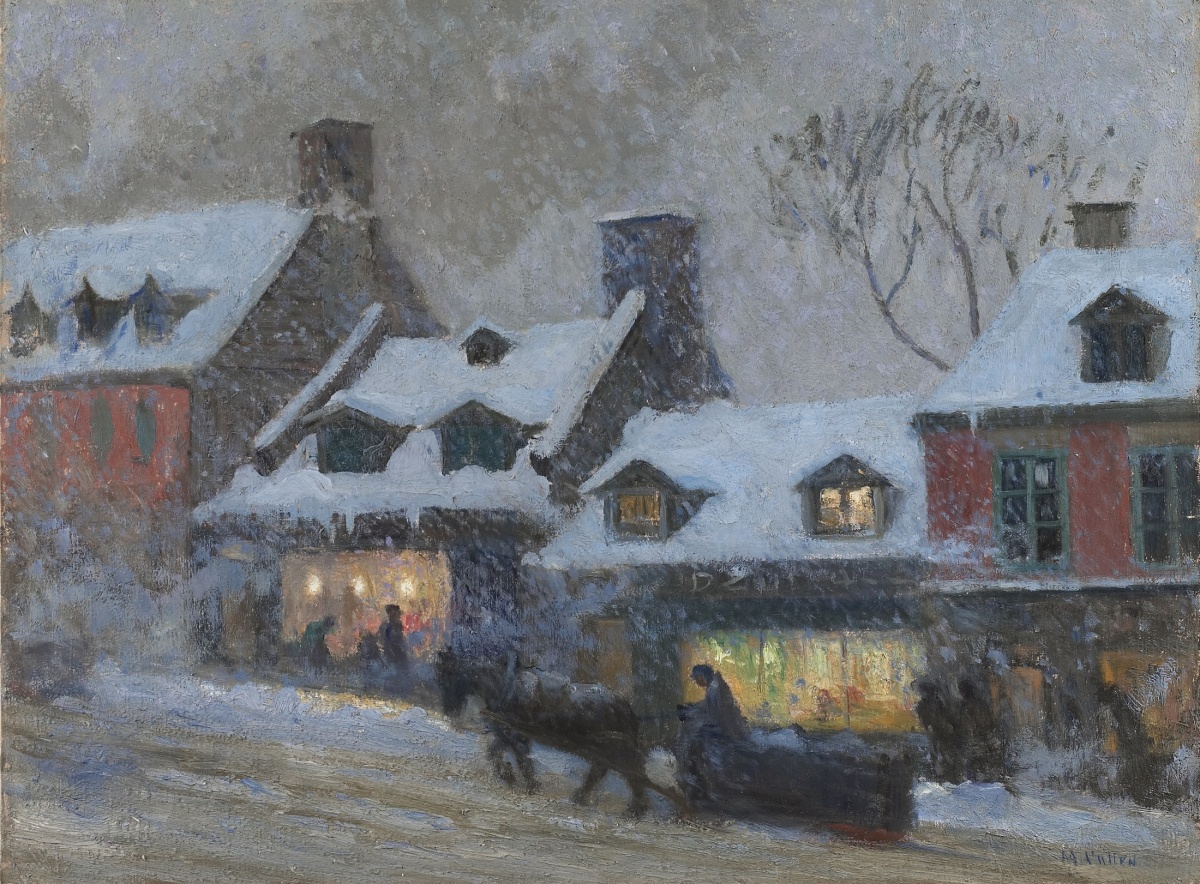 On your next trip to the AGO, come in from the cold to warm up with this week’s Art Pick: The Bird Shop, St. Lawrence Street. Painted by Canadian landscape artist Maurice Cullen, this cozy piece from the Thomson Collection of Canadian Art can be found on Level 2 in Gallery 219, just next to Galleria Italia.

Born in Newfoundland in 1866 and raised in Montreal, Cullen began his artistic career as a sculptor here in Canada before moving to Paris to study at the prestigious École des Beaux-Arts at the young age of 22. While there, he met artists from across Europe and North America and was exposed to the full breadth of 19th century French art – including the revolutionary style and techniques of the Impressionists. Inspired by these works, Cullen abandoned sculpture and took up landscape painting, eventually exhibiting his works at the Paris Salon in 1894.

Shortly thereafter, Cullen returned to Canada and brought the Impressionists’ style of painting to the Canadian wilderness and the gritty cityscape of his new home, Montreal. Using a darker colour pallet than his French counterparts, Cullen became an expert at capturing snowy landscapes and the rosy, semi-haze of twilight – which can be seen in The Bird Shop, St. Lawrence Street.

The piece shows the snow-covered St. Lawrence Street at dusk. In the foreground, a horse-drawn sleigh is pulled up a hill in front of a row of snow-covered shops. The sky is a gauzy, silvery grey with soft snowflakes blanketing several darkened figures hurriedly going about their evening. In contrast to the shadowy street, the shop windows are aglow with warm yellows and shimmering greens. Looking closely, the lights inside each shop seem to twinkle in the growing dusk, seemingly inviting viewers in for a warm drink.

The bird shop depicted in this work was located on the east side of St. Lawrence Street, south of Sherbrooke Street and just above Ontario Street until its demolition in the early 1980s. While the bird shop may be gone, something about the twinkling lights and hurried snowfall walks feels familiar, even today.

Peer into the glowing shop windows of The Bird Shop, St. Lawrence Street during your next visit. Located on Level 2 in the Thomson Collection of Canadian Art (Gallery 219), it is steps away from the Espresso Bar in Galleria Italia.